Global trade is becoming more essential to the economic viability to the United States and its companies, which is why UPS is strongly supporting two pending free trade agreements, the incoming CEO of UPS, Dave Abney, told the Rotary Club of Atlanta Monday.

“One of our growing concerns is the protectionism that is surfacing throughout the world,” Abney said. “More and more of the economic activity is going to be occurring somewhere else (outside the United States). We should really be spreading that message. We understand that trade is a vital economic engine.”

Specifically, Abney mentioned two free trade agreements that have been stalled because there have been many obstacles that have been in the way due to individual nations’ fears to protect their particular industries. 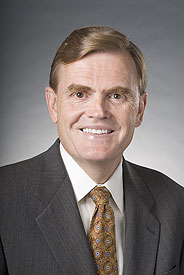 “We have taken the leadership role with both of these agreements,” said Abney, who has been serving as the chief operating officer for UPS since 2007. Before that, he served as president of UPS International. “We believe it’s a tremendous economic opportunity for this country.”

Abney also said that UPS is trying to get one of the future rounds for the negotiations of TTIP to occur in Atlanta so that local companies could become more aware of the opportunities that could develop through the free trade agreements.

There’s no way that U.S. companies will be able to avoid the globalization of the economy, especially if their interested in growing their business.

“Ninety-five percent of the world’s consumers live outside the United States,” Abney said. “By the year 2020, the middle class is expected to triple in the world, most of that in the emerging markets.”

During the question-and-answer period, Abney was asked about which emerging markets show the most potential beyond the BRIC countries (Brazil, Russia, India and China).

Abney said that other countries in Asia, such as Vietnam, and the growing trade between Asian countries, showed opportunities for growth. He also mentioned the Philippines, Mexico and Eastern Europe, other than the Ukraine.

Like most previous CEOs of UPS, Abney began on the ground floor. He was born and raised in Greenwood, Miss, and he got a job with UPS when he was 18 unloading packages.

“I’d like to tell you I had this great vision that I was going to lead this company one day,” Abney told the Rotarians. Instead, he said he was more concerned about trying to get a date with the woman who would later become his wife.

That was 40 years ago. He went on to driving a truck, and then went into management being transferred eight times. He jokingly said his first international assignment was when he and his wife were transferred to New Jersey. “We both cried,” he said.

Abney said he is often asked how the company will changed under his leadership.

“Our company is changing so much,” said Abney, which has been the status quo as UPS has adapted to societal changes from being a messenger company in 1907 to now a full-service logistics company.

“It’s not going to change because of the new CEO,” he said. “Our strategy is not dictated by one person. Our executive team of 10 people sets strategy.”

Abney will become the new CEO in September, succeeding Scott Davis, who has been CEO since 2007.

In closing, Abney recommitted UPS’ civic ties to Atlanta – from supporting its philanthropic and arts and cultural organizations to providing a welcoming environment for its employees to volunteer hours to the communities where they live.

Back when UPS decided to relocate from the wealthy community of Greenwich, Ct. 20 years ago, it did so because its middle-management employees couldn’t afford to live there.