They all came to honor Ingrid Saunders Jones and her 31-year career at the Coca-Cola Co. at a reception at the Fernbank Museum of Natural History on Wednesday evening.

Few executives receive the kind of send-off that Jones received, and that’s because Jones is unlike most executives. In her role as senior vice president of Global Community Connections and as president of the Coca-Cola Foundation, Jones extended a personal touch to people in numerous corners all over the world.

“I can’t imagine life without Ingrid at the Coca-Cola Co.,” said Muhtar Kent, the company’s chairman and CEO, who went on to describe several different leadership eras at the Coca-Cola Co. “We are also talking about two eras here — B.I. (Before Ingrid) and A.I. (After Ingrid).” 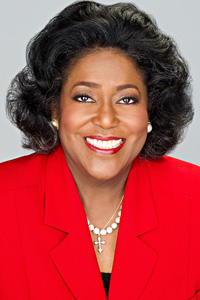 Kent also was able to quantify her role at the company. “During her leadership, the Coca-Cola Foundation has awarded $460 million,” Kent said of Jones. “Think about that impact.”

Carl Ware, a former president of the Atlanta City Council, hired Jones when he was at City Hall (competing with then Mayor Maynard Jackson); and then in 1982, he convinced Jones to join him at the Coca-Cola Co., where she impressed legendary CEO Roberto Goizueta.

“Thirty-six years ago, Maynard Jackson and I saw great potential in you as did Roberto Goizueta,” Ware told Jones Wednesday evening. “But believe me, you have done far more good than any of us could have imagined.”

Alexis Herman, a former U.S. Secretary of Labor who is now a corporate director of the Coca-Cola Co., said: “Ingrid wasn’t simply interested in making history. She wanted to make a difference.”

Now that she’s retiring, Herman said Jones would continue to make a difference — continuing the legacy of Dorothy Height, the late chair and president emeritus of the National Council of Negro Women.

Jones became chair of the National Council last year, the first to be elected to that post since the passing of Height in April, 2010.

Atlanta Mayor Kasim Reed told a personal tale of when he first got elected. “She looked me in the eye. ‘You’ll probably be the last mayor I’ll have to whip into shape,’” Reed quoted Jones. He went on to say that she showed “us the best version of ourselves. Our city is quiet tonight and it bows in honor of you.”

A long line of other speakers also took the stage — civic leaders, students that Jones had taken under her wing as well as members of her team.

“Through her work with National Council of Negro Women as chair…tonight I’m honored to announce we are going to support the advancement of entrepreneurship of women with a gift of $1 million,” said Kent, surprising Jones. “She didn’t know about this.”

When she finally got behind the microphone. Jones was clearly moved. “I’m just overwhelmed,” she said. “I’ve been crying all evening.”

Then admitting to the fact that she likes to control every aspect of putting on an event, she said: “This evening overwhelmed me because I did not know the details.”

Speaking of how she learned about politics, courage and leadership from former Mayor Jackson and Ware, Jones talked about her life journey — from being a teacher in Detroit to her career at Coca-Cola.

Then she shared a parting message with all the people in attendance.

“Atlanta is so special,” Jones said. “Let’s never ever forget that.”