The beginning of the main trail into Lake Charlotte Nature Preserve, off Forrest Park Road. (Photo by John Ruch)

With butterflies, deer, mysterious stone walls and many, many trees, Southeast Atlanta’s newly opened Lake Charlotte Nature Preserve is already a gem of the city. And that’s just a soft-opening start. 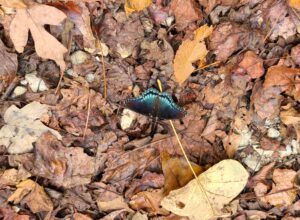 A red-spotted purple butterfly rests on a trail. (Photo by John Ruch)

There are years of work to come to clear out invasive species for the forest’s health and to plan some rustic amenities. And that’s all while the preserve plays its part in the plan for the South River Forest multi-property green space intended to embrace much of Southeast Atlanta and southwest DeKalb.

City Councilmember Joyce Sheperd is among the enthusiasts. “I’m a nature person. I was raised in the country, so I love nature stuff,” said Sheperd, who has long worked with the surrounding South River Gardens neighborhood on the preserve and hopes its children can one day enjoy camp-outs there. Sheperd is currently in a runoff election campaign for the District 12 seat against challenger Antonio Lewis.

The City has been doing prep work on the roughly 216-acre preserve on Forrest Park Road since buying it early last year. A community process about what kinds of amenities to add is expected sometime next year, but Sheperd ended up triggering a soft opening last month because residents couldn’t wait to see the preserve.

“The community had been waiting to get in for months,” she said, adding that some folks trespassed for peeks. “We still have to come back and do a visioning plan for the communities…You can’t vision it if you don’t see it.” 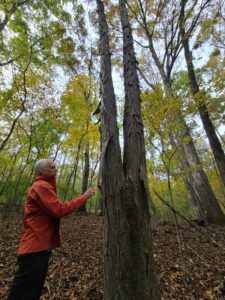 Ryan Gravel examines a shagbark hickory, an uncommon tree in Atlanta that is plentiful in the preserve. (Photo by John Ruch)

After a neighborhood walkthrough Sheperd arranged in October, the City now considers the preserve open, with basic paths — most of them wide, former roads — available for hikes. The entrance, marked with a shiny new sign, is on Forrest Park Road just south of the XPO Logistics truck yard. But, Sheperd cautions, cleanup work continues and visitors need to be cautious of machinery and wilderness areas.

The nature preserve is a rare case of the city getting a second chance on green space. The City actually bought the property back in the 1970s for a similar preservation concept. But that fell apart, and by the 1980s, the City sold it to a housing developer, who in turn sold it to Waste Management, whose huge, shuttered landfill next door looms over the eastern side of the forest. Green advocates worked for years to restore the land to City hands, with the Conservation Fund finally acquiring it and selling it to Atlanta.

Ryan Gravel is among the advocates who literally put Lake Charlotte back on the map. The Atlanta BeltLine visionary first walked (or snuck into, rather) the preserve about four years ago for work on the “Atlanta City Design,” in which he and City Planning Commissioner Tim Keane laid out a vision for the city’s future development. Along with such locales as the old Atlanta Prison Farm — now the contentious site of a public safety training center — the preserve was pegged as a cornerstone of the 3,500-acre South River Forest concept, which has a planning process of its own pending next year. Gravel likens the idea to one of Paris’s great parks.

“By connecting this forest to Southside Park, Constitution Lakes, the Atlanta Prison Farm and other properties, the City would have its own Bois de Bologne,” he says. 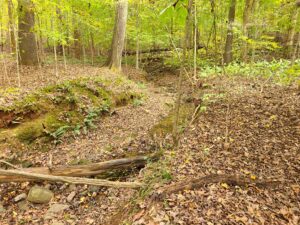 A stream cuts through the forest. (Photo by John Ruch)

On a recent Friday afternoon, I joined Gravel for a long hike around the preserve to see what all the fuss was about. We saw a red-spotted purple butterfly and whitetail deer. We admired towering shagbark hickories, trees that are uncommon within the city limits but abundant at the preserve.

We stood on an old earthen dam and looked down on the marshland that was once the preserve’s namesake lake, which reputedly was drained in the 1980s after a murder victim was found there and an Atlanta Child Murders victim was left along the South River to the north. We saw the cleared area where, until recently, dilapidated hunting lodges and cottages stood, now memorialized only with a stone chimney that likely will remain standing. We saw dozens of low stone walls and terraces, some capped with large trees, reflecting human use long ago. We discussed the possibility of the neighboring landfill opening up to hikers someday, where they could catch a view of Downtown over the trees.

Less pleasant was the discovery of a six-point buck slumped dead against a tree with what appeared to be a bullet wound — maybe the victim of a poacher who failed to track down their kill. If modern-day hunters continue to stalk the forest, that’s all the more work for the park ranger the City is in the midst of hiring in another first. 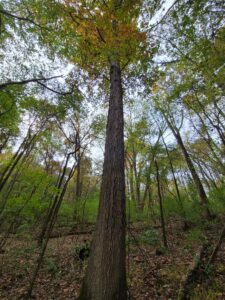 A scene deep inside the forest. (Photo by John Ruch)

Overall, it was a refreshing place of peace and quiet where one can barely tell that I-285 and Moreland Avenue motorists are zipping past very nearby.

On the way out, we met a man and woman from Reynoldstown who had been drawn by word of the opening. “We’re big nature nerds,” said the woman as the couple admired a stand of ferns. The man added that in the area, it’s great to have “access to green space without trespassing on Cop City land,” the opposition term for the public safety training center at the Prison Farm.

Meanwhile, across the street, a City Planning sign on a recently forested tract now used as a dirt firm noted a pending rezoning request for a townhomes concept. Sheperd said that sort of proposal is increasing in the quiet, single-family area. “It’s great we want things to change, but we don’t want to eventually change our community into a different kind of community,” she said.

Guiding inevitable development is what the “Atlanta City Design” was all about and ensuring a green future in Southeast Atlanta is the core of the South River Forest concept. With the preserve barely open, the force can already be seen at play. The more visitors come to the forest, the more they’ll want to see it protected and expanded. And the more attention the area gets, the more developers will jockey for position.

As Sheperd sums it up, “Now everybody’s excited about Lake Charlotte.”

The new sign for the Lake Charlotte Nature Preserve. (Photo by John Ruch)

One of the large trees that towers in the preserve. (Photo by John Ruch)

A turtle shell was among the finds during a recent hike through the preserve. (Photo by John Ruch)

A stump feed fungi and affords a home for critters. (Photo by John Ruch)

One of the many stone walls or terraces that run though the preserve. (Photo by John Ruch)

Some parts of the forest have mossy rocks. (Photo by John Ruch)

A dead deer slumps against a tree, apparently killed by a poacher. (Photo by John Ruch)

A marshland with a small stream was once Lake Charlotte, which was drained in the 1980s. (Photo by John Ruch)

Ryan Gravel walks atop the former Lake Charlotte dam, where workers have piled branches of invasive species they are removing. (Photo by John Ruch)