An Atlanta police officer who was struck and killed by a drunken driver at the Brookwood Interchange has been memorialized with the naming of the interchange in her honor. 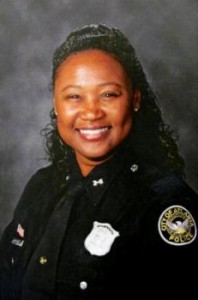 The interchange where Atlanta Senior Police Officer Gail Denise Thomas was killed by a drunken driver will be honored with a sign at the intersection where she died. Credit: City of Atlanta

Senior Patrol Officer Gail Denise Thomas was honored with a sign to be placed at the interchange of the Downtown Connector and exit 251. The exact location and date of installation is still being determined, the state Transportation Department said Friday. The ceremony was Thursday at Atlanta’s Public Safety Headquarters.

Thomas, 46, died Jan. 24, 2012 while working a car crash scene shortly after 11 p.m. near the intersection that leads from southbound I-75 to northbound I-85. The driver who struck Thomas pleaded guilty in February and was sentenced to 16 years in prison on two counts – vehicular homicide and failure to obey the directions of a police officer.

The resolution contains several “whereas” clauses that provide details of Thomas’ life: 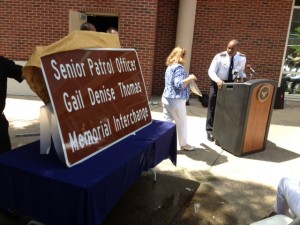 GDOT will install this sign soon to honor fallen Atlanta Senior Patrol Officer Gail Denise Thomas, who was struck and killed by a drunken driver at the intersection of southbound I-75 and northbound I-85. Credit: Atlanta Police Department

“She served with grace and honor and protected her community,” Turner said. “We are pleased to honor and memorialize the courageous life of SPO Gail Thomas with the dedication of a memorial highway sign, so that no one will ever forget her contributions to this city.”

The driver of the car that struck Thomas pleaded guilty in February to one count of vehicular homicide and one count of failure to obey the directions of an officer. A Fulton County grand jury had returned an indictment with 13 charges.

Chastity Nicole Jones, who was 22 when she entered her guilty plea, admitted that she was driving from Marietta to a “club” in Buckhead when she drove into Thomas. Prosecutors said Jones and three passengers in the vehicle were drinking while traveling in order to be intoxicated by the time they arrived at their destination and not have to pay bar prices for alcoholic beverages, according to a story in The Atlanta Journal-Constitution.

The impact pinned Thomas between the vehicle of her patrol car and the 1998 Honda Accord driven by Jones. One of the officer’s legs was severed. There were no skid marks, indicating Jones never hit the brakes hard.

Previous Article
Don’t begin with – ‘This is the End’; Enjoy instead – ‘Before Midnight’
Next Article
Falcons stadium design team will include three local architectural firms