One of Georgia’s most environmentally-friendly companies — Interface Inc. — has selected a new president and CEO.

The company announced on Monday that Laurel Hurd has been tapped to lead the company, effective April 18.

She will succeed Dan Hendrix, who will continue his 39-year tenure with the company by remaining as board chair. 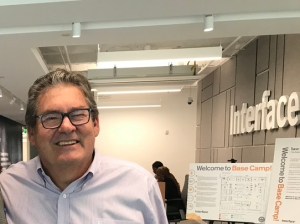 Dan Hendrix of Interface in 2018. (Photo by Maria Saporta.)

Hurd will lead Interface on its next phase of growth, and she also will work to deliver on its mission to become a carbon-negative enterprise by 2040.

Interface, which is based in Midtown, is a worldwide commercial flooring company and global leader in sustainability, which gained international recognition under the leadership of the late Ray Anderson, a corporate champion for the environment.

Hurd comes to Interface with 30 years of sales management, product development and brand stewardship experience in both the consumer-packaged goods and the consumer durables sectors.

Most recently, Hurd served as segment president of learning and development at Newell Brands, a Fortune 500 company based in Atlanta. She oversaw Newell’s largest segment representing more than $3 billion in revenue in 2021, or more than a quarter of Newell’s overall revenue (and approximately $600 million of operating profit).

“Laurel has had great success building new market and growth opportunities for some of Newell’s most well-known brands,” Hendrix said in a statement. “We’re excited to have her strategic mindset and her passion for design and sustainability coming to Interface to accelerate our growth.” 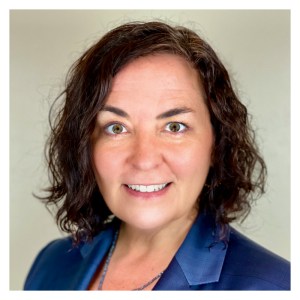 Hendrix went on to say that in addition to being focused on results, Hurd “is a well-respected and highly effective leader known for developing top talent and building high-performing teams, all while driving a customer-centered philosophy that helps to win in the marketplace. We are delighted to have attracted such coveted leadership talent to Interface to propel us forward. I’m confident that with Laurel at the helm, we have the company, our people, our customers, and our brands in the right hands.”

Hurd said she was attracted to the strong culture at Interface as well as its reputation among its employees, business and sustainability leaders, plus the architectural and design communities.

“Interface is a special company,” Hurd said in a statement. “I’m drawn by its powerful purpose and honored to step into the CEO position to build on the company’s foundation as a leader in design, innovation, and sustainability.”

She added that she is “incredibly optimistic about the potential for future growth and market leadership at Interface.”

Hurd described the company as having the perfect combination of innovation, passion and expertise to serve its clients across the globe.

“I’m grateful for the opportunity to build upon Dan’s unwavering dedication and successful stewardship over the past four decades, particularly through the challenging dynamics of the past two years,” she said. “I intend to take us forward to capitalize on the re-emergence of the commercial interiors market and to continue to take share globally as we successfully diversify across segments and expand our mix of products.” 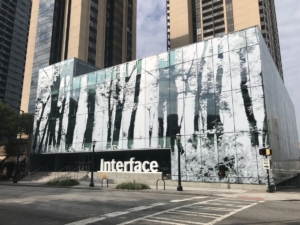 The building that houses the Interface headquarters is wrapped in a recyclable polyester painted with trees. (Photo by Maria Saporta.)

Hurd has spent most of her career at Newell Brands. As head of the learning and development segment, Hurd led double-digit growth and was responsible for market share expansion for the writing category in the United States, Canada, the United Kingdom and Australia. She oversaw a global supply chain including eight manufacturing plants in seven countries. Hurd also was recently appointed as an independent director of the board of directors of THOR Industries Inc., where she serves on the audit and compensation committees.

“Laurel is an impressive operational leader, bringing to Interface her experience with global P&L responsibility in brand-oriented consumer spaces and a strong track record of developing and leading diverse, inclusive teams at Newell Brands,” said Chris Kennedy, the lead independent director on the board of Interface who chaired the search.

“Laurel is an impressive operational leader, bringing to Interface her experience with global P&L responsibility in brand-oriented consumer spaces and a strong track record of developing and leading diverse, inclusive teams at Newell Brands,” Kennedy continued. “I knew the founders of Interface, and I’m convinced Laurel will extend the legacy of sustainability, innovation, great design, a love for customers, and an appreciation of the team that is here, which has been the hallmark of Interface’s leadership.”

Previous Article
The Social, Emotional and Economic Impact of COVID on Women
Next Article
NPU system’s open-meeting issues should get clarity in new reforms