By Maria Saporta
Published in the Atlanta Business Chronicle on November 28, 2014

When you ask Craig Richard what he does for a living, he’ll tell you right off the bat that he’s an economic developer.

That has been his passion for his entire career, and that is why he is so excited to be moving to Atlanta to become the new CEO of Invest Atlanta.

That is also why he only lasted 13 months as the president and CEO of Greater Louisville Inc., the Kentucky city’s chamber of commerce – a job he held from January 2013 through February 2014.

In a telephone conversation on Nov. 25, Richard traced his work history. Before going to Louisville, he had served as senior vice president of economic development for the Greater Houston Partnership. He also served as director of economic development for the Dallas Regional Chamber; senior vice president and chief operating officer of the Arlington Texas Chamber of Commerce as well as COO for a consulting firm that specializes in the field. 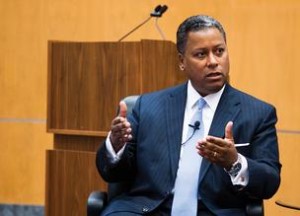 “They hired me to be an economic development professional,” Richard said of Louisville. “It was an unfortunate situation because GLI had pre-existing financial challenges when I got there, and even the board was not aware of the existing challenges. Once we determined that the more pressing need was to restructure the organization, we decided to go in a different direction. That led us away from our economic development priorities.”

A story in Louisville Business First, a sister publication of Atlanta Business Chronicle, reported at the time that Richard’s departure came after “significant financial losses, fund-raising struggles and staff cuts aimed at righting the ship.”

Even Richard said that running a membership organization was not why he was hired, and that his “background is purely in economic development.”

Richard was selected by Atlanta Mayor Kasim Reed and the Invest Atlanta board from a group of three finalists.

He is delighted to be coming to Atlanta, which he called a “dynamic city” and “an economic powerhouse” that is already on a strong trajectory. “My job is to continue that trajectory and take it to another level,” Richard said. “The mayor wants Atlanta to be known as the capital for economic development in the Southeast. Atlanta is the core of the region.”

People in economic development circles who have worked with Richard were pleased with the choice. “I actually know him pretty well as we served on the International Economic Development Council board of directors together,” said Tedra Cheatham, executive director of the Clean Air Campaign. “He is a well-respected, pleasant, good guy.”

“We worked very closely with him on the creation of their first regional strategy called Advantage Louisville (which we finished this summer) when he ran GLI,” Holladay said. “He is a first-class economic development guy and a really good person.”

Invest Atlanta had three diverse finalists to pick from – Richard, the economic development professional; Gregory Buckley, a former COO of Gibson Guitar Corp. who is a serial entrepreneur and private equity investor; and Eloisa Klementich, the internal candidate who is Invest Atlanta’s managing director who has served in the Obama administration as well as in economic posts in California and Mexico.

The chair of the search committee was Brian McGowan, who was Invest Atlanta’s president and CEO until last February when he became COO of the Metro Atlanta Chamber.

“The decision-making process for selecting our new CEO was exactly the same as we followed when selecting Brian McGowan,” Anna Foote, an Invest Atlanta board member who serves as treasurer, wrote in an e-mail. “All things were considered and consensus was required. Each of the candidates were amazing and talented people, and, in my opinion, any one of them would have been an excellent leader for Invest Atlanta.”

Meanwhile, Richard said he is still working with the City of Atlanta to determine his start date, but it could be in mid to late December. As Richard, 50, sees it, economic development is no longer about smokestacks and industry. It is now about offering the amenities that are “essential in creating a sense of place” – contributing to our quality of life.

“The landscape has changed,” Richard said. “It’s about attracting the type of talent that we need.”

Previous Article
The Next Big Epidemic: The Wave of Tuberculosis
Next Article
Tech’s study of Memorial Drive produces a number of solutions