‘Irrational Man’ – Woody Allen movie is among his worst 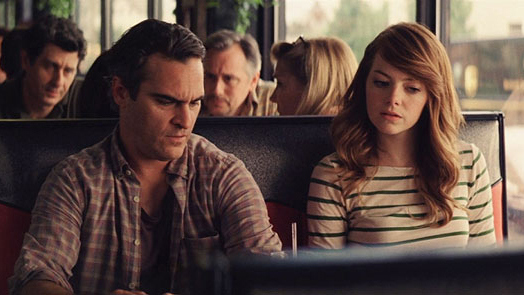 When you make as many movies as Woody Allen has, you’re bound to repeat yourself  — at least a little bit.

But it’s better to repeat the good parts, not the ones that didn’t work.

“Irrational Man” is the newest from our most erratic director and, alas, it’s almost all bits that don’t work.  Joaquin Phoenix is a Big Hire professor, as well known for his dissolute behavior as he is for his academic credentials.

Alcoholic, intellectually lazy and pot-bellied, he nonetheless attracts the undying passion of two women. One (played by Parker Posey with far more wit and grace than the role deserves) is an unhappily married professor on the make. 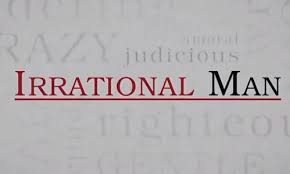 The other is, well…. the other is the stock Woody Allen Other. That is, an amazingly beautiful and just-smart-enough younger woman who is bedazzled by Allen’s protagonist/surrogate.

This time, the job falls to Emma Stone as one of Phoenix’s students who simply will not accept a purely platonic relationship — even if she does have a boyfriend (duller than…)… and Phoenix is impotent.

Phoenix badly needs something to jolt him out of the meaningless rut his life has become. Not lucky enough to be visiting Paris (a la Owen Wilson in “Midnight in Paris”) or to have arrived on screen sometime in the mid-‘80s, when Allen was operating on all cylinders, Phoenix’s professor must resort to melodrama.

He and Stone overhear a stranger’s tale of woe, and Phoenix decides to fix things. He pulls a Dostoevsky, if that doesn’t give too much away – (and even if it does, in a movie this ghastly, it hardly matters).  Repercussions ensue.

As the Woody surrogate, Phoenix mostly preens about, clearly delighted in his impersonation of a dissolute — yet celebrated and self-aware — academic. “Just what the world needs,” he sneers. “Another work about Heidegger and fascism.” 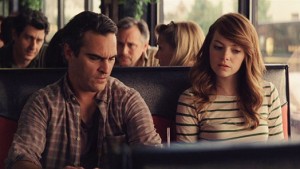 A scene from “Irrational Man” trailer

Stone is even more limited. But what in the world do you do with a role that pretty much peaked when Mariel Hemingway played it in “Manhattan” almost half a century ago?

Stone makes eyes at her co-star — huge eyes as we all know — and gamely tries to put some spark into a leaden relationship.  At dinner she gushes, “I love it when you order for me.”

It’s hard to say if this is the worst movie Allen has ever made.  “Curse of the Jade Scorpion” springs to mind, as do “Whatever Works,” “Hollywood Ending” and several others.

Actually, the real problem with writing about Allen is that he’s made so many wondrous movies that when he stumbles…well, somehow, the disappointment is all the greater.

Still, no one should shell out good money for a disappointment.

Better luck next time; by that I mean, as much for Mr. Allen as much as I do for those of us who’ve hung in with him since the ‘60s.