It was a day of pride for the three Morton brothers.

On Saturday morning, the City of Atlanta officially dedicated a 1.2 mile multiuse path in Southwest Atlanta just blocks away from where they grew up — a trail that meanders through one of Atlanta’s few remaining forests and a trail that eventually will connect to the Atlanta BeltLine.

“We are standing on the shoulders of our parents who fought to save this forest,” said Bruce Morton, a leading citizen environmentalist who learned to value nature when he was growing up and spending time playing in the forest and the creek. 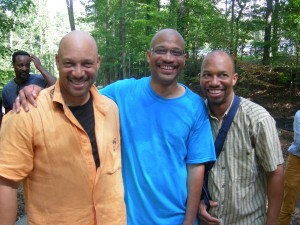 His oldest brother, Keith Morton, said their mother used to send them out of the house in the morning to go play in the woods and not expect them home until lunchtime.

Then in the 1970s, developers planned to build a 300-home subdivision in the community around the Beecher Hills Elementary School, but that was project was stopped by the neighborhood, including their parents.

Later in the 1980s and 1990s, Keith Morton said there was another proposal to cut down the woods and build another 300 units of multi-family homes.

But then his brother, Bruce, got together with jazz musician Lionel Hampton, and others, and they were able to get the area turned into a city-owned nature preserve. 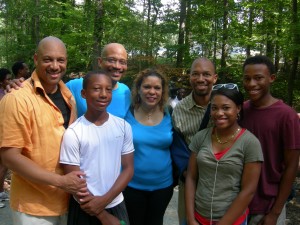 The Morton brothers and their children

Still the woods needed to become more accessible to the Southwest communities. The PATH Foundation began working on building a trail that would connect the Beecher Hills area to PATH’s existing Lionel Hampton Trail and to the Westwood Terrace neighborhood.

The $1.4 million project that was dedicated on Saturday is just the first phase of a 4.5 mile spur trail that eventually will connect to the Atlanta BeltLine. It is part of a planned 33-mile network of trails that will encompass the Atlanta BeltLine project.

Atlanta Mayor Kasim Reed said that as of today, 60 percent of the 22-mile circular corridor that makes up the BeltLine core is now under the city’s control. 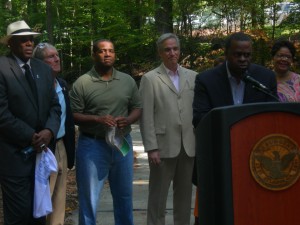 Mayor Kasim Reed addresses the crowd before the ribbon-cutting

“We are not going to let up,” the mayor said. “We are going to make Atlanta more sustainable.”

The PATH Foundation, which has been developing multiuse trails all over the region for more than 20 years. 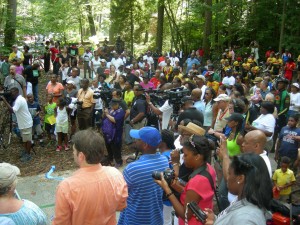 More than 100 people turn out for the trail dedication

Ed McBrayer, PATH’s founder and executive director, said that when this particular spur is complete it will resemble a spider-web, connecting several neighborhoods in Southwest Atlanta as well as connecting the existing PATH system and the BeltLine.

“My hats off to Mayor Reed and the City of Atlanta for putting cycling and walking first,” McBrayer said, adding that he welcomed the trend to designing and building the city on a more human scale. 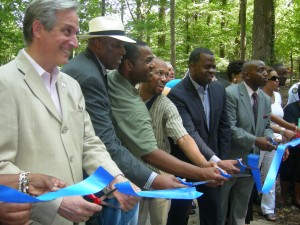 And then they cut the ribbon!

Another person who was pleased was Fulton County Commissioner Emma Darnell. When Mayor Reed finished his remarks, she whispered in his ear: “We’re finally bringing it Southwest.”

But no one was happier or prouder than the three Morton brothers — Bruce, Keith and Harold.

Let me take that back. The only person who could have been prouder would have been their late mother, who probably was watching all the festivities from above.

“The three of us never got along when we were growing up. We could go months without speaking to one another,” Keith Morton said. “My mother, on her death bed, said she had one wish, for the three of us to get along.”

And then looking back at the newly-dedicated trail that they helped bring to life, Keith Morton said: “We are very close.” 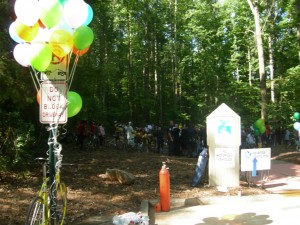 Previous Article
‘Blue Jasmine’ — a movie unlike anything Woody Allen has done before
Next Article
Atlanta’s other secret: Our technology entrepreneurs live well and contribute