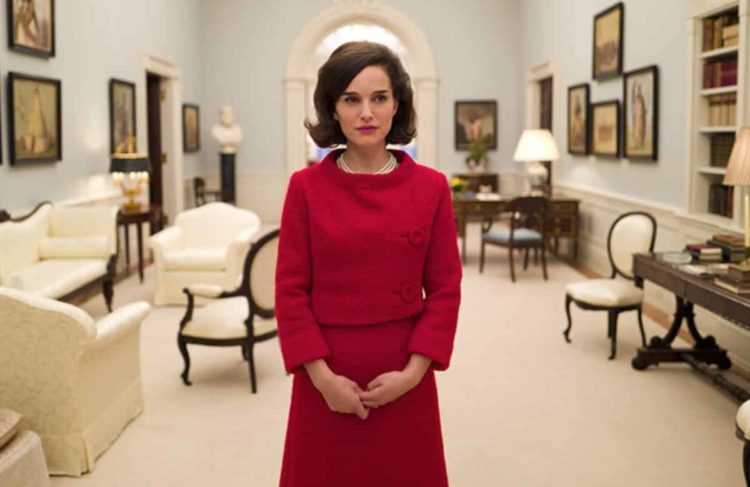 Here’s how you know the new film “Jackie” is working:  You move from trying to decide just how credible Natalie Portman’s impersonation is to thinking about anything and everything except that.

Portman, who won a much-deserved Oscar for 2010’s “Black Swan,” doesn’t look in the least like Jacqueline Bouvier Kennedy (the Onassis connection is still in the future). Portman’s face is more oval, her nose is stronger. 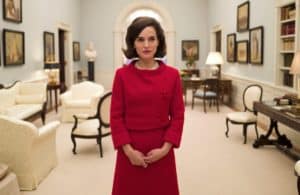 She doesn’t sound like her either; her vocal register is much lower.  Still, Portman ultimately gets the essence of one of the most famous women of the last century.  And she does so in a manner that’s respectful but not worshipful.  She is a vessel, not an acolyte.

It’s more than her rather canny approximation of Jackie’s breathy whisper-voice and odd Finishing-School-Meets-Long-Island accent. Rather, it’s the way Portman holds herself, the way she conducts herself with other characters, her steely resolve under the lady-like façade. We even note how she puts herself together when she’s not on display – say, the finishing touches she applies to a certain infamous pink suit that will soon be splattered with her husband’s blood and brains. (“Let them see what they’ve done” she reportedly said after the assassination when a well-meaning aid asked if she’d like to change). 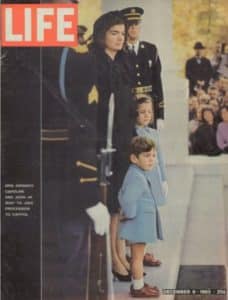 Though it flashes back to that day and to the funeral the whole world watched and the days in between, the film is framed by an interview she did with Life Magazine journalist, Theodore H. White (a well-cast Billy Crudup). It’s not always a friendly encounter. “I don’t smoke,” she says imperiously as she chain smokes throughout their talks; the clear implication is, he’d better not write that she does.

What they talk about, more than anything else, is how Jackie planned the funeral – what roadblocks she encountered, what details (the riderless horse) she insisted on, what decisions were made as part of ritual and history and which ones evolved spontaneously.

If you’re old enough, you wait for memories to show up – the OMG live-on-TV murder of Lee Harvey Oswald or JFK lying in state. If you’re not, you look for iconic images passed down through the ages via photos and old videos.

The movie doesn’t try to solve the mystery of Jacqueline Kennedy. But it does poke around her legacy. Or rather, her legacy, as it was those few terrible days in November, when Camelot shut down shop.

Having lost the battle of the cigarettes, White remarks, “You’ll have to share something personal eventually. People won’t stop asking until you do.”

She snaps back, “They’ll interpret my silence however they want.”

Previous Article
Traditions of health, wellness, and athletics develop Spelman students’ minds, bodies, and souls
Next Article
From Atlanta he sold to the world