It is the back story from bicycle-crash survivor Jim Durrett that underscores this year’s PACE Awards, by which the Clean Air Campaign honors top commute programs. 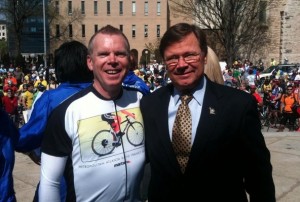 Durrett won the PACE category of GDOT Leadership Award for his use of influence as a community leader to promote clean-air commutes. Later Wednesday, in the just-released edition of the Buckhead CID’s newsletter, Durrett’s column in the Executive Director’s slot began with this compelling sentence:

“Maybe you’ve heard, but I recently went airborne. Unfortunately, it was not in a fun aeronautical way, but in a ‘flew of my bicycle while going 34 mph’ way. You can read the whole story of my accident on our blog.”

Durrett’s blog is a chilling account of the crash and aftermath: “I heard the truck hit its brakes as it passed me. The pain overcame me, and I laid back and closed my eyes. I hoped someone would find me before I died.”

Durrett’s column in the newsletter of the Buckhead Community Improvement District reiterates the conclusion he shared in the crash blog: “Two final thoughts: First, if you ride a bike, wear a helmet. It saved me. Second, let’s place appropriate emphasis on road maintenance and good repair with our tax dollars.”

This year’s PACE awards recognizes more than a dozen persons or organizations whose work toward improving air quality and reducing traffic congestion is particularly noteworthy.

In addition, 172 Georgia employers and property managers were recognized as Platinum Partners. To qualify, at least 20 percent of all employee or tenant trips to the worksite must be made by means other than as a single-occupancy vehicle, and property managers must offer at least five amenities that benefit commute options.

“It’s energizing to see the growing number of Georgia employers that understand the importance of reducing traffic congestion and improving the region’s air quality,” Renay Blumenthal, Clean Air Campaign board chair, said in a prepared statement. “The PACE Awards is our way of saying, ‘Thank you,’ to those who go above and beyond to improve the health and vitality of our communities.”

Here are the details of this year’s top award recipients. Click here to read more:

Agnes Scott College works with The Clean Air Campaign as part of the college’s sustainability program. The goal of the program is to become climate neutral by 2037. To reach this goal, Agnes Scott has a designated liaison between faculty and staff and The Clean Air Campaign staff who leads the clean air activities on campus. Programs include No-Idling, and the use of bikes, Zipcars, transit and more. The college was the first in Georgia to implement a No-Idle policy that requires vans and trucks to turn off their engines when making deliveries. Agnes Scott also provides a free bike sharing program and a discount program at a local bike shop. Agnes Scott has had many Commuter Champions over the years, and hosts a fall kick-off meeting with The Clean Air Campaign every year to discuss new ideas.

Federal Reserve Bank of Atlanta has made it easy for their employees to choose a commute alternative.  The bank’s location in Midtown has limited parking capacity but enjoys close proximity to MARTA. Incentives play a major role, with carpools and vanpools receiving free deck parking and transit riders receiving a 100 percent subsidy for their monthly passes. Federal Reserve Bank also allows many employees to telework or work compressed work weeks. The bank hosts at least two commuter fairs every year so new employees can learn about clean commute options. Alternative commutes account for nearly half of all commute trips.

CBRE owns and manages the 271 17th Street building in Atlantic Station. The company works closely with ASAP+ to promote and facilitate use of commute alternatives, hosting ridematching events for carpool/vanpool formations and “try it” days for commuters using alternatives.  CBRE also provides financial support for the Atlantic Station shuttle, a bikeshare program and preferential carpool parking.  All new tenants receive ASAP+ information and are highly encouraged to take part in various programs including ridematching, regional incentives and Guaranteed Ride Home (GRH). CBRE also conducts a quarterly contest, awarding a pair of movie tickets to the person who logs the most clean commute trips.

This Clean Air Campaign Government Champion is the first of the “new North Fulton cities” to apply for Green Communities Designation with the Atlanta Regional Commission. The City of Milton promotes The Clean Air Campaign and the Clean Air Schools program, and received a Safe Routes to Schools grant which promotes biking and walking to school. The city also offers compressed work weeks and teleworking options to employees. Approximately 30 police officers, 51 firemen, and 10 other City employees participate, and participation is expected to increase. Clean commute options are promoted at various city events/festivals, and efforts are underway for “No-Idling” signs and stickers on city-owned vehicles, as well as reserved parking spots for carpools, vanpools and alternate-energy vehicles. Since partnering with The Clean Air Campaign, City of Milton employees have removed 7,187 vehicle miles from roadways and kept 3.59 tons of pollution out of the air.

Robins Air Force Base (RAFB) is the largest industrial complex in Georgia, employing nearly 23,000 people. In 2010, RAFB formed a team to expand commute options for employees and to increase participation in existing commute programs. The Transportation Improvement Program (TIP) has grown by leaps and bounds in recent years and is now the second largest in the Air Force. More than 700 people participate in TIP, with 110 of them using transit through the Macon-Bibb Transit Authority/Buses into Robins Daily program. In addition, RAFB provides reserved parking spaces for carpoolers, and offers compressed work weeks and telework opportunities. RAFB programs eliminate in 2,557 drive-alone commute trips per month. The RAFB Public Affairs department has worked to encourage internal workforce participation in the commute option programs, and this hard work has paid off. Fifteen RAFB employees have been recognized as “Clean Air Commuter Champions”, meaning they have eliminated 25,000 pounds of pollution from the air by choosing clean commute options.

Jimmy John’s is known for “freaky fast” delivery of sub sandwiches, but when road construction in the  Buckhead area began hindering their quick-service guarantee, owner Chuck Sobczuk decided to kick the company’s courier service into high gear with expanded bicycle delivery. The success and dependability of the program grew the business, and Jimmy John’s is now up to 95 percent bicycle delivery with 19 bike couriers. Since ramping up bike delivery service, Sobczuk saves approximately $1,000 per month on fuel and parking expenses. Each day, the Jimmy John’s crew keeps pollution out of the air during lunch time deliveries. Additionally, store employees who commute to work via bicycle prevent 49 tons of pollution annually from being emitted. Sobczuk has made it mandatory for his employees to log their commutes and rewards his team for their efforts. Jimmy John’s cyclers have inspired others to use the bike lanes in the Buckhead community and the crew participated in the region’s first-ever Bike to Work Challenge in October.

UHS Pruitt, a family-owned healthcare company, is headquartered in Toccoa, Ga., but when management decided to expand into Norcross, they implemented an innovative shuttle program to provide relief to long-haul commuters. The company now owns a 16-passenger van that shuttles employees from Toccoa to Norcross and back every day. This option costs employees $50 per week, and those volunteering to drive the shuttle receive a discounted rate. There is currently a waiting list to ride, and there are plans for UHS Pruitt to purchase a second shuttle. This project has improved morale and helped retain employees after the move to Norcross. Participants eliminate 2,400 miles of vehicle travel per week thanks to UHS Pruitt’s new ride.