John Portman finally has a street named in his honor.

John Portman Boulevard at Historic Harris Street is the new name of Harris Street, which connects Centennial Olympic Park with Peachtree Street, and on to a gateway to the Downtown Connector. 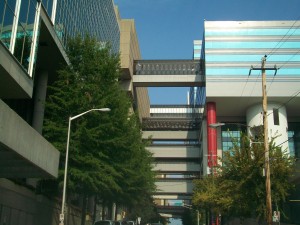 The renaming approved by the Atlanta City Council culminates a battle that has raged almost a year. The council renamed Harris Street in May, but the matter was taken to court by historic preservationists who were opposed by civic and business leaders – including former Atlanta Mayor Andrew Young.

“Atlantans from all walks know of the great contributions John Portman has made to the development of our city, particularly the role he played in the revitalization of downtown Atlanta in the 1970s,” Mitchell said in a statement after the council’s Aug. 15 vote.

“Atlanta is a city that is constantly evolving and we must honor those past and present who have played a positive role in our city’s growth and evolution,” Mitchell continued. “A street-naming in Portman’s honor is befitting of his contributions and legacy.” 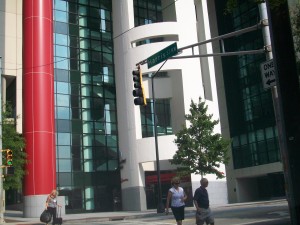 It is Portman’s civil rights legacy that Councilman Michael Julian Bond recalled in a conversation after the council voted in May to rename Harris Street in Portman’s honor. Bond’s father, Julian Bond, is an icon in the civil rights movement.

Portman Boulevard is a block north of Andrew Young International Boulevard and a block south of Baker Street, where the City Council voted in May to install street toppers to recognize civil rights leader Xernona Clayton.

The legislation approved by the City Council last week, by an 8-6 vote, was crafted in hopes of withstanding another legal challenge.

That said, the Atlanta Preservation Center is raising money for its Street Renaming Legal Defense, and the executive director of the Wren’s Nest, the home of Brer Rabbit author Joel Chandler Harris, has opined against renaming a street that honors one of the author’s cousins. 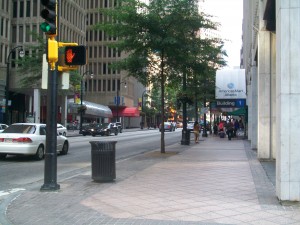 The view south from the corner of Peachtree Street and the newly named John Portman Boulevard at Historic Harris Street. Credit: David Pendered

Here are some highlights of Portman’s legacy that the City Council released after voting to rename Harris Street in Portman’s honor: