I’m not sure what writer/director Taika Waititi, of “Thor Ragnorok” fame and a self-described “Polynesian Jew,” is. He also plays, with admirable exuberance, a surprise supporting role – that of 10-year-old JoJo’s (wide-eyed Roman Griffin Davis, excellent) imaginary best friend. 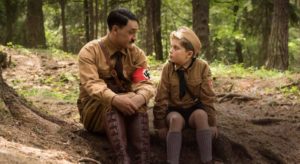 A scene from “JoJo Rabbit”

But here’s the, um, thing. JoJo lives with his mom Rosie (Scarlett Johansson) in a small German town. It’s the mid 1940s, World War II is winding down, and things aren’t looking good for the Nazis. That doesn’t deter JoJo, a determined mini-member of the Master Race. He mostly loves the training camp run by Sam Rockwell) and Rebel Wilson – except when he’s asked to kill a rabbit. His inability to do so earns him his nickname.

Luckily, there’s that imaginary pal who is none other than the Fuhrer himself, done up in crisp khakis, riding breeches and a bright red swastika armband. When JoJo gets discouraged, Hitler is always right there to buoy him up. That he inevitably does so in a silly, buffoon-ish manner is part of the film’s charm.

But the movie, which is based on Christine Leunens’ novel, “Caging Skies,” has problems.  Of tone, of pace and of just plain storytelling. Along with JoJo and his buddy Adolf, we have a parallel plot straight out of Anne Frank’s attic. JoJo’s beloved, stylish mother has a friend of her own who is not imaginary. As the boy discovers to his – of course – horror, she’s hiding a Jewish teenager (Thomasin Harcourt McKenzie) in their home. 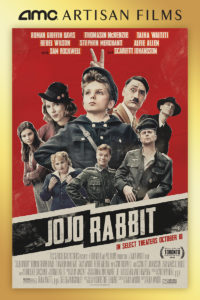 To a boy who’s eagerly embraced the Nazi doctrine of Jews as horned demons who use little Christian boys’ penises as earplugs (I think you have to be a rabbi to do that), the teen is a figure straight out of a nightmare. She almost can’t help teasing him.

Their relationship, well played as it is, comes from a completely different movie than the one with Imaginary Hitler. Moreover, “JoJo Rabbit” is never as daring as it seems to think it is. It has nothing to match the over-the-top shock of Brooks’ hilarious musical extravaganza, “Springtime for Hitler.”

The picture doesn’t feel like an absolute failure or even a cheat. It’s more like a movie with too many ideas that hasn’t quite figured out how to pull them all together.

It can happen to the best directors. Even Mel Brooks and Wes Anderson.