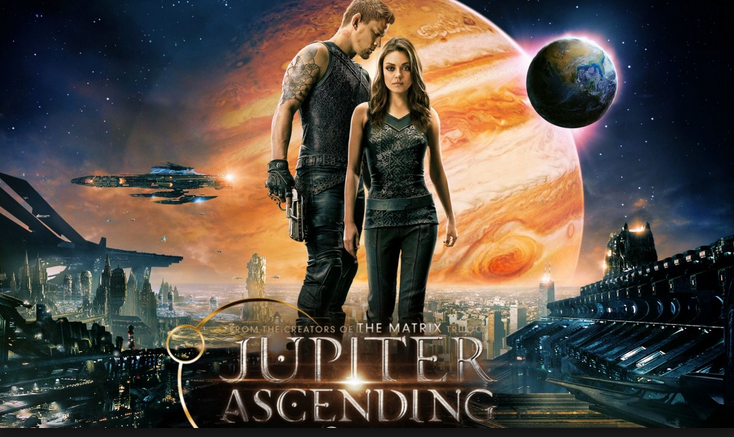 George S. Kaufman once offered his daughter the following advice: “Sample everything in life.  Except incest and folk dancing.

I pass no judgment on folk dancing, but it was, perhaps, in this spirit that I decided to sample the new sci-fi extravaganza, “Jupiter Ascending.”

A gaudy and chaotic guilty pleasure, the movie is as relentlessly (simultaneously?) over-done and under-cooked as I expected. 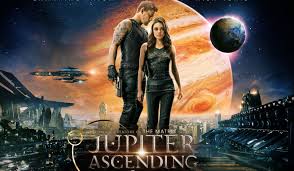 And it’s considerably better than the second and third “Matrix” movies — to which I refer because they, too, were made by the Wachowski siblings (a needlessly coy way of saying, when they were making “The Matrix” trilogy, the Wachowskis were Andy and Larry, but have since become Andy and Lana; and if anyone wants to get PC-belligerent about that crack, I actually prefer their post-gender-transition movies).

The title “Jupiter Ascending” is a play on words. Jupiter is Jupiter Jones (Mila Kunis), the strikingly beautiful progeny of an otherwise lumpen family of Russian immigrants. (They’re so relentlessly lumpen, they’re like a Mad Magazine parody).

Having spent most of her life cleaning toilets, she’s understandably nonplussed when she’s informed that she is a Princess.

Actually, she’s better than a Princess.

In the universe according to the Wachowskis — which at its best borrows from Edgar Rice Burroughs — Earth is part of a mega-corporate galaxy and our girl Jupiter  — here’s where I made my first trip to the concession stand — is some sort of DNA’d avatar that entitles her to, well, Earth.  And perhaps much more.

That’s why a triumvirate of ostensible rulers (Eddie Redmayne, Douglas Booth and the delightfully monikered Tuppence Middleton) wants her either in the family or out of the way.

Poor Jupiter — though she looks as smashing in lumberjack plaid as she does in interstellar sparkles — is clearly out of her depth. Luckily, she has a guardian angel.

Well, more like a guardian wolfman. Caine (Channing Tatum) is what is known as a “Splice” — part human, part wolf. Alas, none of his human genomes comes from Morgan Freeman or Laurence Olivier. But, geez, he’s impressive when super-skating through space (like a speed-racer crossed with a cross-country skier).

Kunis has the unenviable task of carrying the movie while stuck with a character who’s mostly carried by others for their own selfish — or selfless — purposes. But even so, she’s remarkably vacuous in the role, evincing the sort of one-note gloss that works a lot better on the Red Carpet than in a sustained performance.

The only one who seems to understand how to make an impression in the midst of all this FX bombast is Redmayne. Skittishly silken, whisperingly sly (like a certain Serpent in a certain Garden), he does the late great Roddy McDowell proud. Put this together with his recent Oscar-nominated turn in “The Theory of Everything” and you know he’s the best actor of the year. No matter who they give the prize to.

Maybe it’s time for another movie about Caligula…