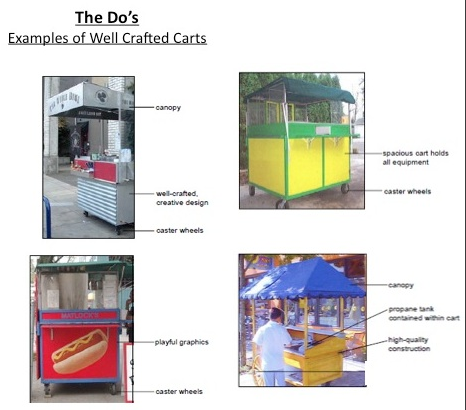 A trip to downtown Atlanta may soon include the chance to buy snacks and souvenirs and even a meal from vendors along Atlanta’s sidewalks and in MARTA stations. 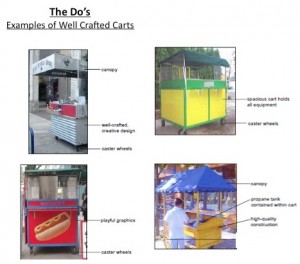 Atlanta envisions vending carts like these, which are used in Portland, to be on Atlanta streets within a few months. Credit: City of Atlanta

The Atlanta City Council approved a plan Monday that is to have vendors back on the streets before Christmas. MARTA could have sandwich shops and coffee kiosks in stations within two years, based on results of a study due by February.

One thing everyone in charge agrees is that the vending programs will look nothing like the “Third World flea market on steroids” that set up shop in Atlanta during the 1996 Olympic Games, to cite a description coined by Dick Yarbrough, chief communications officer for the Atlanta Committee for the Olympic Games.

“It’s important to state very clearly, up front, from a policy standpoint, that the city for far too long has been underserved by unappealing, poorly regulated, swap-meet vending, which is the mayor’s term on this, in some of our most important public places,” said Hans Utz, Mayor Kasim Reed’s deputy chief operating officer.

“We just are not going to continue with that,” Utz said.

The issue of sidewalk vending is coming to a head in Atlanta and at MARTA for any number of reasons.

Atlanta was compelled to come up with a new vending program after a judge tossed out the most recent vending program. The prior system was adopted when Shirley Franklin was mayor, and the idea was to privatize the oversight of street vendors. 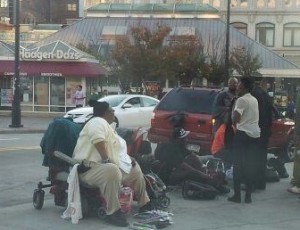 Atlanta’s new vending ordinance will not permit vendors who sell wares from the street and their laps, as did this vendor who worked outside MARTA’s Five Points station. File/Credit: atlsoma.com

Reed’s administration vows that the new program will be “world class” and will not tolerate eyesores. Portland’s program provided great examples, Utz said.

Folding tables will not be permitted. Incense and oils are not named on the list of approved merchandise in Atlanta’s new regulations, though cell phone batteries and charges did make the list. Aspirin and toothpaste and umbrellas, too.

Hot dogs will be sold at two kiosks – one near Woodruff Park, which is popular with college students and the office crowd, and one near Peachtree Center, a haven for office workers and tourists.

Don’t even think about looking for a vendor outside MARTA’s Five Points Station. The city doesn’t plan to allow a single vendor to peddle wares outside MARTA’s major transfer station.

“Not in front of any MARTA station,” Utz said. “We are working with MARTA to put robust vending within the stations.”

MARTA’s concessions program looks like it will begin in 18 to 24 months at four stations: Five Points, North Springs, Doraville and Arts Center, Denise Whitfield, MARTA’s manager of retail development and concessions, said Monday. Those stations are emerging because they lead the system in the number of items sold through vending machines. 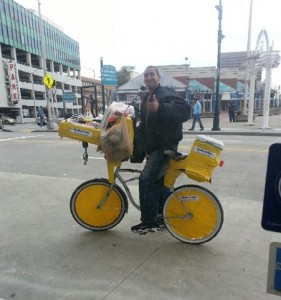 As whimsical as this vendor on a bicycle may be, Atlanta’s new vending ordinance bans him from both MARTA’s Five Points Station and any vending location because his cart isn’t up to code. Credit: atlsoma.com

MARTA has been working on its vending and concessions system since 2009. That’s the year then Gov. Sonny Perdue signed legislation allowing people to eat and drink inside MARTA stations. MARTA viewed that as the essential first step to a vending program.

Litter was one of the bigger possible problems with allowing people to eat and drink in stations and on vehicles. Surprisingly, litter hasn’t been a problem since MARTA installed vending machines in stations last year, Whitfield said.

“We’ve sold more than 500,000 beverages and we do not have a trash issue,” Whitfield said. “The bottles found [beside tracks] are not the brands we sell in the vending machines.”

From 14 to 16 stations lend themselves to concessions, Whitfield said. A total of 33,000 square feet of space is available in 40 to 41 retail spaces.

A mix of national brands and local businesses are expected to win concessions contracts to sell products including food, beverages and retail items.

MARTA has talked with national brands including Subway and Starbucks, Whitfield said. McDonalds is another logical concessionaire.