Kennesaw State University is starting a new degree program in culinary sustainability that will teach best management practices for the food service industry. 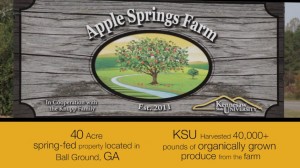 Kennesaw State University is starting a degree program on sustainable culinary practices, which draws on an array of programs including the university’s farm to campus operation. Credit: KSU

The new program, reinforced by two sustainability awards in May from the National Restaurant Association, is part of KSU’s effort to establish its place in leadership training for nation’s $632 billion marketplace of restaurants.

“We’re all fighting for the same consumers,” said Christian Hardigree, who devised the curriculum. “The question is: How can we do things that are more efficient, more effective, and that improve the bottom line?”

Changing the lighting is one solution that Hardigree said was used by legendary restaurateur George McKerrow Jr., founder of LongHorn Steakhouse and, with Ted Turner, Ted’s Montana Grill.

McKerrow invested $111,000 in replacing light bulbs in 56 restaurants, and he reaped a $250,000 return through energy savings during the first year, Hardigree said. In addition, because McKerrow negotiated a two-year guarantee on bulbs, the company had netted a total of $389,000 in savings before he stopped tracking the savings that resulted from the bulk of bulbs.

“It was hard for him to convince people to invest $111,000,” Hardigree said. “He improved profitability just through changing the type of lighting.”

Another way to view the new curriculum is through the business decision of the New York Hilton Midtown to end room service. Room service is so important to some guests that they said they won’t return.

An alternative to discontinuing room service might have been to reduce the cost of food preparation through the sustainable practices to be taught at KSU. Areas students will examine include reducing food waste, redesigning the waste stream, and reducing the amount of energy consumed by lighting and cooking equipment. 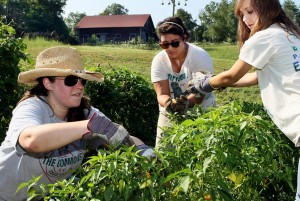 The concept of culinary sustainability is associated with the more widely known movement of farm to table food. Hardigree said that as awareness of the cost of food transport has grown, both in economic and environmental terms, awareness is rising of the cost of energy and water used in food preparation. As she wrote in one proposal:

Culinary sustainability is also part of the growing awareness of the nutritional aspects of food in the context of the farm to table movement.

KSU has dubbed its version a “farm to campus” program. And it’s an award winner: In May, KSU beat out competitors including Walt Disney Parks and Resorts, in Florida; the U.S. Air Force; and HMSHost, which provides food and beverage at venues including Atlanta’s airport.

“The NRA awards are like the Oscars of food service,” Gary Coltek, KSU’s director of Culinary and Hospitality Services, said in a statement. “This award truly speaks to the direction that college and university food service has taken over the past few years.”

KSU’s farm to campus program began in 2010 with a 2-acre organic farm. The next year, it was expanded to a 40-acre property with 6,000 square feet of greenhouse space. Only non-GMO produce is grown, using only natural farming methods. Nearly 50 honeybee colonies were added to assist with pollination. Waste that can be composted is returned to the farm for reuse, according to the program’s website.

This program will serve as a laboratory for students in the sustainability degree program, Hardigree said. The experience will add value to their bachelors degree in culinary sustainability because future employers will recognize the graduates practiced their skills in an acclaimed farm to campus program, she said.

From a statewide perspective, KSU’s culinary sustainability advances support the University System of Georgia’s drive to devise forward-looking programs in order to compete for the nation’s top students and maintain enrollment.

The goal is to begin the new culinary program with 150 students this autumn and grow to 400 students in four years. Out-of-state students are expected to comprise an ever-rising proportion of enrollment, growing from 4 percent at the start to 8 percent in four years, to 15 percent in five years, according to the curriculum proposal.

Previous Article
Shawn Wilson was happy in his job, until Moment a mentor took him personally to enroll in college
Next Article
Krog Tunnel’s avant garde shows celebrate history, music and art