Kevin Rathbun’s Moment was tearful one, stirred into a lifelong family recipe in the restaurant business 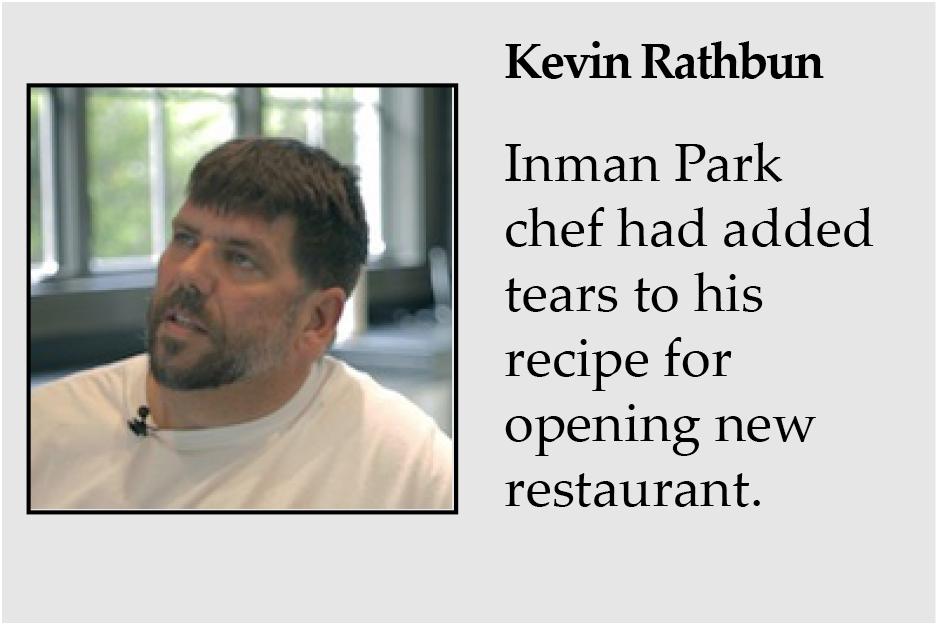 Chef Kevin Rathbun had invested months of time, as well as a lot of money and sweat on his relatively risky idea to open his first restaurant off the beaten path in Atlanta’s Inman Park neighborhood. As he prepared to open the doors on his first night, he added an unexpected ingredient to what would soon become a legendary menu: his tears.

It capped a Moment for which many taste buds have been thankful ever since – the opening of Rathbun’s. Yet it was one fired early in life while growing up in Kansas City. His mother operated several prominent Kansas City restaurants as his father, a jazz musician, provided the musical entertainment. His parents’ dedication to creating an exceptional dining experience carried home as his mother frequently spread out the china and family silver to serve exquisite home-cooked meals.

His parents’ intensely personal dedication to making their patrons happy became an influential factor in one of Kevin’s signature dishes: the presence of the chef himself at his diners’ tables. Early on in Atlanta, where he first served as executive chef at Buckhead Life Restaurant Group’s NAVA, he began leaving the kitchen to introduce himself to patrons and to inquire – sincerely – how they liked the dishes he had just prepared.

The rapport he developed tableside rivaled the national recognition he received in the kitchen later as corporate executive chef, overseeing some of the city’s best Buckhead Life restaurants, including Bluepointe and the Asian-fusion cuisine at Kyma. In 1994, he was nominated for the James Beard “Rising Star Chef.”

At age 14, Kevin began his career as an apprentice for top-tier Kansas City Restaurants. By 17, he was sous chef at well-known Kansas City restaurant, The American Restaurant. His 28 years of combined experience in the restaurant business learning from and working for others in Kansas City, Dallas and Atlanta brought him to the opening of his signature restaurant, Rathbun’s, in 2004.

Kevin’s defining Moment in his career wasn’t conceiving the idea for his first restaurant – it was the day it opened.

“I remember getting done talking to all of the waiters and sharing a glass of champagne and I started to tear up,” he said. “I didn’t want to do that in front of the whole staff so I finished the line-up and immediately went in the bathroom and cried.”

Emotions washed over Kevin as he realized the reality – and terror – of reaching the edge of a dream he had long pursued. His family’s and his own legacy in the restaurant business had equipped him with what he needed to be successful – now he had to do it.

“I had been doing restaurants all of my life – I have run restaurants, cooked in restaurants, worked in front-of-the-house, my mother was in restaurants, my brother as well,” he said. “The one thing that I knew that I could do – was that once I got opened, I knew I could run it.

His feelings at that Moment, when he knew he and his team had to succeed, were confirmed on opening night. They served 80 covers (guests) with no help from outside public relations or marketing representatives, but only the efforts earned by himself, his business partners, Cliff Ramble and Kirk Parks, and his wife, Melissa.

Given the circumstances, Kevin described the first night as “phenomenal,” but the daily uncertainty that is infused into each day in the hospitality industry took effect soon after.

Thankfully, fear was fleeting. Fast forward to 30 days after opening night and Rathbun’s was doing more than 400 covers on a Saturday night.

“It was quite phenomenal, especially our location being around the corner, off the beaten path in Inman Park – it was kind of an exceptional feat,” he said. “We were very, very lucky to get to where we were and have been very prosperous since then and very blessed as well.”

Rathbun’s has received a multitude of awards and recognition since its opening including “Best New Restaurant” from both Esquire Magazine and Travel & Leisure. Kevin Rathbun has also since opened critically acclaimed Kevin Rathbun Steak and Krog Bar in Inman Park. He is anticipating the opening of his fourth restaurant, KR Steakbar in Peachtree Hills. He and his brother, Kent, also a chef, appeared together as contestants on the highly acclaimed cable show, Iron Chef America.

But Kevin Rathbun doesn’t limit himself to the success with his restaurants – he is an active community member and charitable donor to Atlanta organizations and he was the major influence of a successful charity dinner concept he brought to Atlanta.

While in Dallas, Kevin was involved in charity dinners to raise money for the Cattle Barons Ball, for which they would auction dinners to groups to serve a large group of friends in private homes. The fundraising event raised nearly a quarter-million dollars for the organization’s charities in one year.

“When I came to Atlanta, that concept hadn’t really reached here,” he said. He was working with Buckhead Life Restaurant Group’s founder, Pano Karatassos, on the local edition of Share Our Strength, the founding organization of The No Kid Hungry campaign. At Kevin’s suggestion, the two started the dinner fundraiser for Share Our Strength and it has been a wildly successful fundraising vehicle for charities event since.

“We started it and it just took off,” he said. “They’re fun, they raise a lot of awareness, and we get a lot of other Atlanta chefs involved, so we’ve become a community of chefs as well.”

Kevin attributes his community involvement and contributions to the Moment he had when he opened Rathbun’s – the Moment when he was elevated from the ranks of chef to the risk-laden role of entrepreneur. All those years of building loyal fans in the kitchen and the dining room have paid off handsomely. As he talked with us next to his Viking stove in the kitchen of his soaring Morningside home, he was humbled as well.

For Kevin, giving back to the community means more than fundraisers and donations – it means giving the community great food, quality service and providing them a great place to be – an idea that mimics that of his parent’s dedication he witnessed growing up.

“So many things were involved in that Moment that kind of came to fruition,” he said. “Super happy to be part of the Atlanta community and give back in many, many ways – which my parents did and taught me how to do.”

Next week in Moments: Hank Aaron

Next week in Moments: Hank Aaron, remembering the Moment he tried to quit playing professional baseball.