Next month marks 50 years since Martin Luther King Jr.’s “I Have a Dream” speech, which talked about hewing “out of the mountain of despair a stone of hope” and being “able to transform the jangling discords of our nation into a beautiful symphony of brotherhood.”

This month in Atlanta, a dozen Palestinian and Israeli middle school students challenged the roots of their animosity in the cradle of civil rights. They learned about making friends with those they’ve been taught to despise.

They came via Kids4Peace, an “education-for-peace initiative” that every summer brings a dozen Palestinian and Israeli children to Atlanta (other chapters operate in Massachusetts, Vermont, North Carolina and Texas). The main purpose of the program is to contribute to the cultivation of a new generation of adults who will be more willing to pursue nonviolent resolutions in a region where violence has been the first resort for thousands of years.

Kids4Peace has brought a dozen Palestinian and Israeli children from Jerusalem to Atlanta every summer for the past decade to attend camp where they learn how about non-violence and respecting each other faiths and traditions (Credit: Kids4Peace).

More than 6,000 miles removed from the conflict, the Jerusalem children shared and taught their faiths and traditions to each other and their American peers. They also organized their own religious services. Besides spending time in north Georgia, they visited sites around Atlanta, including the King Center.

Does the exposure reduce the hostility? That was my question last week, as the Atlanta chapter’s 10th annual “Abraham’s Tent” celebration closed the kids’ two-week visit. It’s not an easy one to answer, but there are promising signs.

“In school we’re always taught about the world only from our perspective,” said Toot, a 15-year-old Israeli Jew from Jerusalem. (Camp directors were reluctant to divulge participants’ full names out of concern they might face reprisals for taking part in a group that encourages dialogue between both sides.)

“Everything has more than one side and your side is not necessarily right,” Toot said. “I don’t agree with all of my of my fellow counselors and friends but I do believe that we need to love one another.” 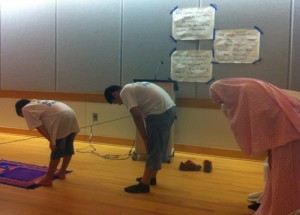 The third force in the pre-teen peacebuilding were Georgia kids of the same age who acted as “peace pals” for each visitor from Jerusalem.  Of the 12 Georgia kids, eight were Christian and four were Jewish. (Disclosure: both of my daughters have served as peace pals before this summer).

Louis, a Palestinian Christian counselor originally from Nazareth, said that like Toot, the experience has transformed his view of the world.

“You really get to see the conflict from the eyes of many different people,” said Louis, who is 16. “Even through that, you make many friendships.”

Louis recalled sharing a room with another Kids4Peace member at a seminar in Jordan. His roommate was Israeli.

“He had very strong feelings against us as Arabs,” said Louis. “Yet we ended up staying up until 2 am talking about all the stuff that teenagers go through.”

At Abraham’s Tent—so named for the presence of Abraham in Christianity, Judaism and Islam—the children sang songs, put on skits demonstrating stories from scripture and how each faith observes holidays. The performances included skits about a Muslim trying to maintain the discipline of fasting during Ramadan; a re-enactment of Christmas, the crucifixion and the resurrection of Jesus Christ; and Rosh Hashanah, among others. 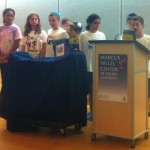 The organization, which is closely tied to the Episcopal Church in the U.S., was founded in 2002 at St. George’s College in Jerusalem.

“Kids4Peace began as a dream among a bunch of Jewish, Christian and Muslim children and their families in Jerusalem during the second intifada [period of intense violence] in 2002,” said Josh Thomas, executive director of Kids4Peace USA, after Abraham’s Tent wrapped up. “Families dreamed of a place where kids could come together to laugh and play and sing and have fun, to meet each other and to dream of some new possibilities for their lives.”

“And that dream still stays with us,” Thomas said.

Organization leaders say Kids4Peace isn’t meant to be a mountaintop experience that does not create real change. Thomas described it as “a six-year program” that’s currently trying to find ways to stay actively involved with those who’ve been with the program and are now adults.

Toot, for example, first came to Kids4Peace in 2010 as a camper, returned for Kids4Peace Leadership Camp in Vermont and served as a counselor for the Atlanta chapter. “Kids4Peace really made me the person that I am today,” Toot said. “They show you the right way to live.”

Or having a dream of friendship as norm, not the exception.

Previous Article
Top Myths About Mortgages
Next Article
Proposed four-lane road in middle Georgia promoted as traffic reliever for I-20 in Atlanta, helpful to port