King children back in court: alliances shifting; settlement may be out of reach; Bible and Peace Prize in limbo

Just when the legal differences between the children of Martin Luther King Jr. and Coretta Scott King couldn’t seem to get more complicated, a new wrinkle was unveiled in Fulton County Superior Court on Tuesday.

The reason the siblings were in court Tuesday was for Judge Robert McBurney to hear summary arguments about who owns the late Civil Rights leader’s traveling Bible and his 1964 Nobel Peace Prize.

The King Estate – represented by CEO Dexter King and his brother, Martin Luther King III, the chairman – had filed suit against their sister, Bernice King, saying the Bible and the Peace Prize belonged to the Estate. She is the third director of the Estate’s board.

At the time that the lawsuit was filed, Bernice King had possession of the Bible and the Peace Prize, and the brothers had said the Estate was interested in selling both of those assets – a move that Bernice King strongly opposed, saying some family items were sacred.

Until the issue of ownership could be established, Judge McBurney ordered – and Bernice King complied – that the Bible and the Peace Prize be placed into a court-controlled safe deposit box. 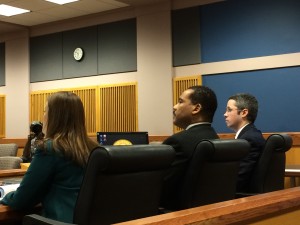 At the hearing on Tuesday, Dexter King, who lives in the Los Angeles area, was sitting with his lawyers in court. Neither of his siblings were in court, and neither of them knew that he was in Atlanta.

After the lawyers for both sides argued their case about whether the King Estate actually owned the Bible and the Peace Prize – each citing a previous ruling in 2009 to boost their position, it appeared that the two sides could be headed to a trial in late February.

Then a new twist was revealed.

Martin Luther King III now was being represented by his own attorney – William Wechtel of New York City. It is a move that holds some symbolism because Wechtel’s father had been one of MLK Jr.’s attorneys.

Apparently Martin III had called a board meeting of the King Estate to explore a possible out-of-court settlement between the siblings.

But the King Estate’s lawyers – Nicole Jennings Wade and Luke Lantta of the Bryan Cave law firm – had filed a temporary restraining order to prevent such a meeting from taking place.

In this situation, it was clear that Bryan Cave was representing just Dexter King as CEO of the King Estate rather than both brothers.

Wade said that because Bernice King was a “conflicted director,” any vote taken by the King Estate “would be illegal and non-binding.” For that reason, she was asking Judge McBurney to prevent such a meeting from taking place.

McBurney said he was “leery” to prevent the siblings from having discussions about a possible settlement.

“They have met before without having to get judges to review the agenda,” he said. “I appreciate that Bernice might have a different perspective about a different ownership of the Bible and the prize.” 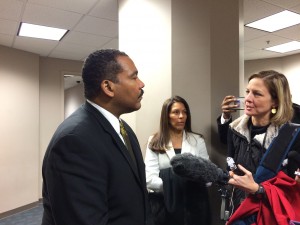 Dexter King takes questions from the press as his wife, Leah Weber King, looks on

She went on to say that “any resolution that comes out of (the settlement discussions) would be legally challenged. It has to be properly supervised in an appropriate form where nobody is going to challenge the outcome.”

“Unless there is a unanimous resolution,” Judge McBurney said. “We don’t know what folks are talking about.”

She went on to say that Martin III’s lawyer had been “adverse” to the King Estate and to Dexter King in the past, but she did not elaborate.

“There’s just something weird going on,” she said.

Bernice King’s attorney, Eric Barnum, then said the theme of the day was “to do it right the first time.” He did point out the irony that Wade was actually arguing against her client, Martin III, the chairman of the King Estate who had called for a board meeting.

Barnum said that if Wade believes that Martin III called for the meeting in bad faith, “then Ms. Wade should talk to her client.”

Barnum said an ideal outcome would be a “global resolution of the case.”

It seemed as though Judge McBurney would be relieved if the siblings could resolve their differences outside of court. 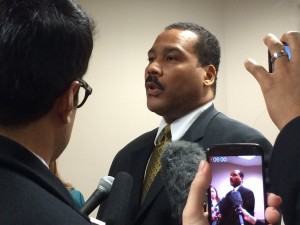 Dexter King continues to take more questions from the press

“I’m not inclined to stifle discussion about this case,” he said. “What’s the harm in discussing this in a directors context?”

Wade was not convinced. “The entire set up for the board meeting is disconcerting,” she said. “I’m not sure what’s going on.”

McBurney also seemed a little confused by the latest twists and turns.

The prospects for a “global resolution” may be optimistic.

Barnum did provide an email to the court dated Jan. 7 from Martin III’s attorney Wechtel to William Hill, another attorney representing the King Estate in another lawsuit, that one against the nonprofit King Center.

Wechtel was objecting to the King Estate seeking a Temporary Restraining Order to prevent the board from meeting to discuss a possible out-of-court settlement or resolution.

Please send me whatever written authority you have from your client, Estate of Dr. Martin Luther King Jr. Inc., to seek a TRO today. I can’t imagine that you have any authority because the Chairman has not been consulted by you or Dexter in respect of this TRO. Indeed he has not spoken to you several months and there has been no board or shareholders meeting over 9 months.

Please be further advised that the Chairman has instructed me to advise you that he is absolutely opposed to your client seeking a TRO today. As such, you should proceed accordingly. In my humble opinion, that would militate in favor of your NOT seeking any relief today; and at the very least reading this email to the Court should you proceed notwithstanding the fact that you have no authority from your client to even appear in Court in respect of the duly noticed board meeting by the Chairman.

After the hearing, Dexter King answered a few questions from the media – basically repeating the arguments that had been stated by his attorneys – saying the Bible and the Peace Prize belonged to the Estate.

When asked about the plans to sell those items, Dexter said: “I don’t think we are dealing with that. We want it properly protected and properly preserved. The Nobel Peace Prize has never been viewed, never been on display. Any solution would contemplate that. The corporation ultimately will determine what happens and what will take place.”

Dexter King did call Bernice King “a conflicted director,” and that a vote of the board that included her could be challenged.

But then he added: “I’m certainly open and hopeful to some kind of discussion that would be positive for the corporation and dealing with the legalities. The issue is the context and the forum. The siblings – we can get together and possibly have a solution.”

Dexter King, and his wife, Leah King, flew back to Los Angeles Tuesday evening. They said they would come back to Atlanta for the trial.

Previous Article
Column: Paul Bowers aims to keep Georgia Chamber relevant in 2015
Next Article
MARTA Is Making A Comeback, With Or Without Funding