A new report shows poverty is expanding in Georgia, a grim reminder of the final frontier Martin Luther King, Jr. had identified before his death. 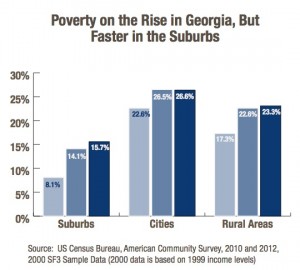 The GBPI report matched the findings in 2013 of the Brookings Institute: Suburban poverty is rising at a rate faster than urban or rural poverty. Credit: GBPI

The Georgia Budget and Policy Institute found that Georgia residents now comprise the sixth poorest population in the nation. Georgia’s poverty rate is at its highest since 1982. Some 1.8 million Georgians live in poverty – more than 19 percent of the state’s population.

King had announced his Poor People’s Campaign five months before his assassination in April 1968. Five weeks after the shooting, the campaign built an encampment on the National Mall in Washington to house demonstrators for six weeks. Robert Kennedy’s funeral procession passed through Resurrection City in a show of respect, according to Stanford University’s King research institute.

The GBPI report suggests that 46 years after Resurrection City, King’s birth state is losing the battle to lift residents out of poverty:

And the trends are heading in the wrong direction.

The report’s author, GBPI policy analyst Melissa Johnson, found that pathways out of poverty are increasingly blocked. The poor face struggles with high housing costs and health bills, a lack of transportation to job centers, childcare that can accommodate their early-morning and late-night work schedules, and a shortage of education and skills necessary to land a well-paying job. 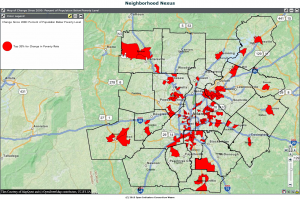 If these trends are unchecked, prosperity will become more elusive for the poor, Johnson states:

Poverty cuts across black-and-white racial boundaries in Georgia, the report found. About the same number of each race is poor, though poverty affects a greater proportion of black because blacks make up 31 percent of the state’s population and whites comprise 60 percent.

Poverty had a similar face when King summoned the Poor People’s Campaign. It drew support from American Indians, Puerto Ricans, Mexican Americans, and poor whites, according to the Stanford research institute.

King framed the issue of poverty and the Poor People’s Campaign in these terms at a meeting of the Southern Christian Leadership Conference:

Today in the nation’s capital, Republicans and Democrats have renewed their discussion of the future of the war on poverty. President Obama is slated to highlight income disparity in his State of the Union address on Jan. 28. Politicians of all stripes already are lining up to lay out their positions on addressing poverty, according to a Jan. 9 article in nytimes.com.

In the GBPI report, Johnson outlines a few policy changes she thinks could move the needle in Georgia’s efforts to help poor Georgians improve their quality of life. Each proposal is within the purview of the state Legislature, now convened in Atlanta: