Sometimes it seems gangster movies are as American as Mom and apple pie.

So, it makes a certain sense that “Lansky,” starring Harvey Keitel as the mobster Meyer Lansky, should open around the 4th of July.

Actually, Keitel plays the elderly Lansky, long “retired” from his illegal activities and living in Miami in the early 1980s. His time is mostly divided between a neighborhood coffee shop and walking his dog on the beach. If it weren’t for rumors of murdered former associates and $300 million stashed away somewhere, he’d be just another senior citizen soaking up the sun. 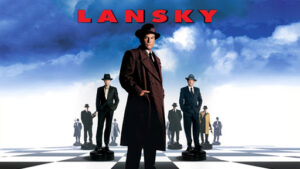 But his colorful past, which he consistently denies, is what draws a (fictional) journalist named David Stone (Sam Worthington) to interview him, on the condition that Lansky have final say over what’s been written and that the book not be published until after his death.

So, most of “Lansky” is told in flashback through the protagonist’s personal filter. Which, according to him, boils down to this: he was actually a pretty good guy. He may have had to turn a blind eye to some bloody business practices while handling some major Mob accounting, but he also used his underworld contacts to help suss out Nazi spies during World War II and give lots of money to Israel.

The flashbacks make up a majority of the movie, and they are dutifully, if not brilliantly, enacted by Joe Magaro as the young Lansky; David Cade, as his partner-in-crime; and Bugsy Siegel (the muscle to Lansky’s mental acuity with numbers which made him the Mob’s indispensable accountant). 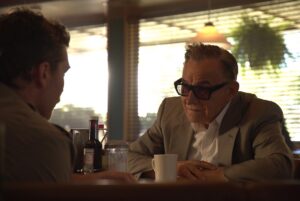 Still, the segments set in the past are far superior to the film’s present-day tale about how the FBI forces Stone into becoming an informant. All it takes is a lovely brunette in a swimsuit, which says something about the ho-hum level to which “Lansky” sometimes sinks.

But then there’s Keitel. And he’s so good – so very good – that you wish filmmaker Eytan Rockaway had figured out how to make a movie about two guys talking at a coffee shop (My Dinner with Meyer?). As written, the role of the aging Lansky isn’t much. But Keitel fills every moment with texture and understated menace.

It may not be enough to recommend the movie, but it is worth noting – especially given the short shrift Keitel’s career has been given compared to Robert De Niro and even Al Pacino. One wonders what we might’ve seen had someone made a movie about Lansky in the 1970s, starring Keitel.

Now that might’ve been, as they used to say, a must-see

“Lansky” is screening in select theaters, and it is available on video on demand.