A glance at a few state reports about layoffs in metro Atlanta over the past decade shows some interesting trends. 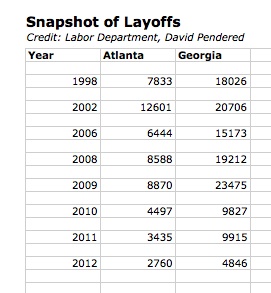 The number of layoffs reported to the state Labor Department is trending up this year, compared to 2011. This year’s increase, through mid August, bucks a four-year trend of fewer layoffs over the course of each year going back to the start of the recession.

Meanwhile, Georgia’s cities aren’t necessarily the places to find work. Just six of Georgia’s 14 metropolitan areas have a lower unemployment rate than the state average of 9.6 percent, according to the Labor Department. Atlanta’s one of the six, with an unemployment rate of 9.3 percent.

The employment figures are especially relevant in light of the looming presidential battle over varying approaches to create jobs.

Georgia isn’t a battleground state, and as such its unique labor situation may not reach a national audience unless the candidates make it part of the contest.

The layoffs report for metro Atlanta cover a 10-county area, the same 10 counties that voted on, and rejected, the proposed transportation sales tax.

So far this year, an estimated 2,760 layoffs in metro Atlanta have been reported to the state Labor Department. That’s about 500 more layoffs than were reported at this time in 2011.

Companies large and small have been laying off workers in 2012.

They include 195 in April by Wendy’s in Atlanta; 62 in May by Waste Management in Alpharetta; 57 in March by Bank of America in College Park; 34 in January by Ryder in Lawrenceville; and 141 in January in Atlanta/DeKalb by Bloomingdales.

The number of layoffs reported in each case was typical of the number reported by companies during the same period last year. One difference is that last year, there were 27 separate announcements of layoffs, compared to 29 so far this year.

Still, the layoffs pale in comparison to past years.

Textiles, manufacturing and light industry led the losses: 300 layoffs at GCO Apparel in Carroll County; 500 layoffs at Springs Industries in Griffin; 350 at Quebecor Printing in Atlanta; and 300 at Atlantic Steel Industry in Atlanta.