Sara Fountain graduated her 11th class of Leadership DeKalb, and then decided to retire as the organization’s executive director.

Fountain has been head of Leadership DeKalb for more than a decade — and over that time more than 800 adults and young people have graduated and been involved with the organization.

“Serving in a community leadership training capacity has been both exciting and fulfilling,” Fountain said in a statement Wednesday. “I have met some of the greatest people, and it has been a privilege to serve this outstanding organization. Connecting our members to issues facing our region for the past 11 years has been a wonderful experience.” 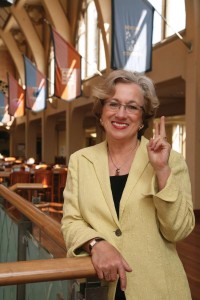 “Sara is the model of a servant leader,” Silverman said. “She has led hundreds of events for Leadership DeKalb class members and alumni, including the organization’s 25th Anniversary last year.”

She also is an active member and leader in numerous organizations including the Association of Leadership Professionals; the Regional Atlanta Civic League; the Atlanta Press Club, from which she received the Distinguished Service Award; Decatur Rotary; Sierra Club; Georgia Conservancy; Georgia Organics; Southface Energy Institute; and the Briarcliff Woods Civic Association where she continues to serve as a director.

She is a member of the national Advisory Board of the College of Liberal Arts and Social Sciences at her alma mater, Georgia Southern University, and is a founding board member of the DeKalb Literacy Council, among other organizations and activities.

The organization said that Caroline Moise, a veteran community leader and former board member and 2001 graduate of Leadership DeKalb, will succeed Fountain on an interim basis until a new executive director is named.

Moise served as senior development director for Emory University from 1995 to 2002. She is a director of the Atlanta Women’s Foundation, Visiting Nurse Hospice Atlanta and Limestone College; and a former director of Atlanta Film Festival 365, Georgia’s WIN List, the DeKalb Rape Crisis Center and the Glenn School for Young Children. She served on the board of Leadership DeKalb from 2003 to 2009.

Leadership DeKalb was founded in 1986 as a nonprofit organization that works to build a network of ethnically and culturally diverse adult and youth leaders who are committed to addressing and resolving the issues that impact the quality of life in DeKalb County and the metro region. For more information, visit www.leadershipdekalb.org.