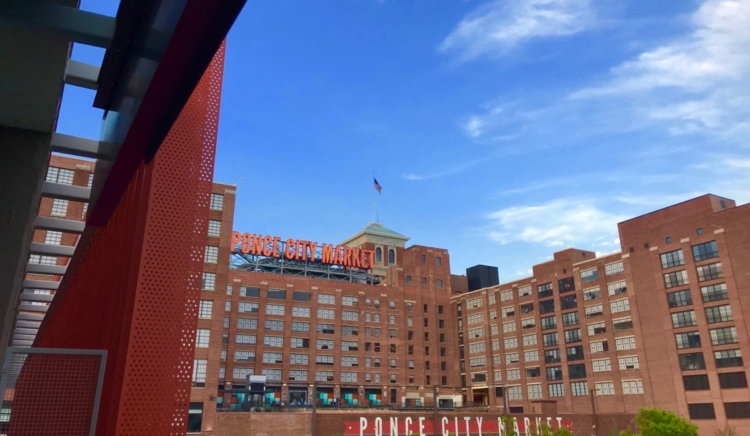 Portions of the Old Fourth Ward may be redesignated as a drug-free commercial zone. The northern boundary of the zone is Ponce de Leon Avenue and included Ponce City Market. Credit: Kelly Jordan 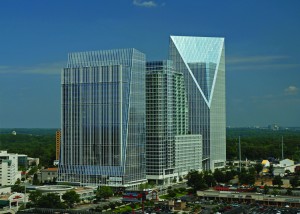 Rebound is a relative term. Rajeev Dhawan, of Georgia State University, and other economists point to the dearth of commercial construction and bank financing to contend the market has not recovered its pre-recession level.

But there’s no denying that Atlanta was mentioned twice in a generally positive report on commercial real estate issued Tuesday by CBRE Group, Inc. Apartment prices at Terminus are part of the reason Atlanta made the list.

Published apartment prices at Crescent Terminus range up to $3,865 for a two bath, two bedroom unit with 1,501 square feet on the fourth floor, according to the website. The brand identity states: “High standards. No apologies.”

Based on Cousins’ report, only about 61,000 square feet of office space remains available at Terminus, located south of Lenox Square near the corner of Peachtree and Piedmont roads. The two towers comprise 1.2 million square feet in towers of 27 floors and 25 floors, according to the website. 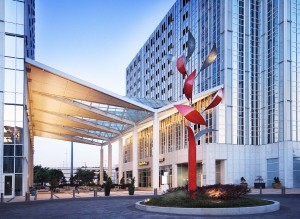 The cafe row shows that Terminus is a self-contained community, though it’s located in the heart of Buckhead’s commercial district. Credit: Cousins Properties

“The Buckhead real estate market continues to gain momentum with corporate relocations and new multi-family and retail offerings, and we’re excited to be a part of it,” Thad Ellis, Cousins’ senior vice president and Atlanta market leader, said in a statement.

Reports from a number of market observers align along the notion that metro Atlanta’s office market is improving:

These reports constitute the sort of information that Dhawan characterized as “noise” that makes it difficult to interpret what’s really happening in the economy. During a speech at GSU in May, Dhawan noted that institutional investors would be funding projects if the commercial real estate market had truly rebounded.

“Where is the financing?” Dhawan said. “There is no word of financing; these are projects. These towers [under construction] are done by private equity, not by banks.”

Cousins has announced that Terminus is now leased at the highest level since Terminus 200 was completed in 2008. Cousins declined through a spokeswoman to release pricing information for Terminus, such as rental rates, concessions and other terms.

Cousins did release recent lease signings that include:

“We are thrilled about the amount of activity going on at Terminus,” Ellis said.

Previous Article
Desegregating an entire community: Albany Movement takes flight (Part 3)
Next Article
The recovery, and the president, struggle against a skeptical tide