The lawyering business isn’t hiring at the same rate it was before the Great Recession, and a pair of mixed reports released this week on metro Atlanta show that even though some local firms are hiring, the sector is taking a conservative position with office space. 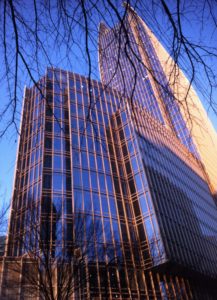 Some Atlanta law firms are taking a ‘wait and see’ strategy regarding the office space they will need. Some firms are downsizing, others are remodeling rather than moving, and other are seeking short-term leases, according to a report by CBRE. Credit: Kelly Jordan

Two indicators of the business of law are its needs for office space, and the rate at which it’s hiring. The two new reports suggest a less-than-rosy economic outlook, similar to that of Rajeev Dhawan’s whose report last month predicts a drop in housing starts and sluggish employment gains.

Regarding office space, CBRE’s report focused on the Midtown market. The report states that firms are taking a conservative approach to office space. They tend to downsize in an existing building rather than absorb the cost of a relocation. They are renovating space to appeal to millennial lawyers and creating to shared workspace, according to the report:

Specific to metro Atlanta, the NALP report observes in its report, Law Firm Hiring Has Not Rebounded Evenly Across Major Markets Following the Recession:

A chart of hiring at the larger firms in metro Atlanta puts the situation into graphic perspective. A total of 215 young lawyers were hired in 2007 and the same was added in 2008, according to NALP’s report. The number flickered up, to 145 in 2017, as NALP reported, before it dropped to 127 hires in 2018.