Leinberger’s latest on metro Atlanta: Era of sprawl ending, WalkUPs are next cycle of development

Chris Leinberger’s new report on metro Atlanta recharges his thesis that walkable communities will characterize the region’s next wave of development. 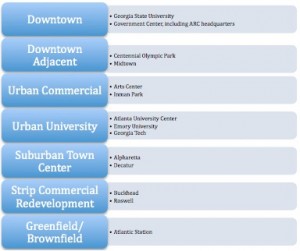 Urbanist Chris Leinberger identified seven types of WalkUPs in metro Atlanta, and the ARC provided a few examples of each. Click on the graphic for a larger version. Credit: ARC/David Pendered

“Metro Atlanta, the ‘poster child of sprawl,’ is now experiencing the end of spawl,” Leinberger contends in the report released Thursday, “The WalkUP Wake-Up Call: Atlanta.”

Atlanta is the second city Leinberger examined in what may well become a series of “WalkUP Wake-Up” studies. Washington, D.C. was the subject of a 2012 report, and other cities being contemplated for future analysis include Boston and Detroit.

Incidentally, the definition of a WalkUP, or Walkable Urban Place, boils down to one in which most people can meet most of their daily needs within a walk of a quarter-mile. The overall metrics include both pedestrian accessibility and a community where it’s pleasant to travel on foot.

Leinberger’s report on Atlanta emphasizes the importance of knowledge-based industries, as well as educated residents, in fostering communities that are both vibrant and prosperous. The report urges governments to prepare for the redevelopment of urban centers and suburban areas with appropriate land use measures and infrastructure.

As an urban land use strategist and developer, Leinberger brings a market-based perspective to his studies. Leinberger has studied metro Atlanta for three decades and may be best known locally for his work with the Brookings Institution and Robert Charles Lesser & Co. In addition, Leinberger now serves at the George Washington University’s School of Business as the Charles Bendit distinguished scholar and research professor. 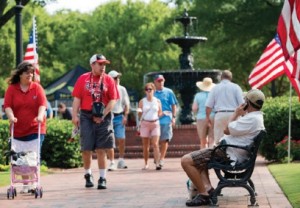 Glover Park in Marietta is an example of a suburban town center that is defined by, “a walkable urban grid and, in many cases, historic buildings that preserve the memory of the place from a more vibrant era,” according to Leinberger’s study. Credit: “The WalkUP Wake Up Call: Atlanta”

The Atlanta Regional Commission facilitated the release of the new study and noted highlights including:

The ARC is promoting through its Livable Centers Initiative some of the walkable neighborhoods that Leinberger foresees developing. LCI grants have promoted the redevelopment of historic downtowns and commercial corridors throughout the regions, in places as disparate as downtown Suwanee and downtown Atlanta.

The LCI grants have put muscle behind the retrofitting of metro Atlanta’s earliest communities – a total commitment of $500 million that includes $18 million in study funds from 2000 to 2017; the allocation of $350 million for priority funding of transportation projects that result from LCI studies; and the approval of an additional $150 million for these projects in the 2030 Regional Transportation Plan, according to the ARC’s website.

“We are pleased to see thriving, walkable urban places emerging throughout metro Atlanta,” Tad Leithead, ARC’s chairman said in a statement. “It’s evident that the market favors the kind of development that offers real mobility choices and opportunity for new community vitality. Greater walkability, housing and retail options are keys to our future economic growth.”