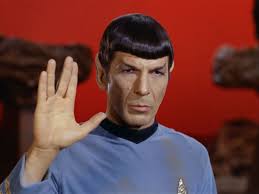 The hold that classic TV stars have on us can be remarkable — as strong, in its way, as that of a Henry Fonda or a Lauren Bacall.

Think of losing Lucy. And now, Leonard Nimoy, the once and forever Mr. Spock.

Yet Nimoy did have a presence outside of “Star Trek.” I saw him on stage once, in his one-man show about Vincent Van Gogh. And he made an impression in the movies, too.

Not just as the star — and sometime director — of the big-screen incarnations of the TV series that made him famous, but also independently.

Probably his best-known directorial effort was “Three Men and a Baby” a hugely popular adaptation of a French picture about three bachelors who suddenly find themselves dealing with a baby (the title is nothing if not self-explanatory). The “three men” are a peculiarly mid-‘80s stew of male types: Tom Selleck, Ted Danson and Steve Guttenberg.

However, I do have two major Nimoy recommendations.

In 1988, he directed “The Good Mother,” an under-appreciated drama starring Diane Keaton and Liam Neeson. Based on a novel by Sue Miller, it’s about a divorcee (Keaton) who could lose custody of her young daughter because she and her boyfriend (Neeson) are hippie-ish lovers (it’s a matter of her uptight ex vs. their innocent but let-it-all-hang-out relationship).

And you really must see Nimoy in Philip Kaufman’s brilliant 1978 remake of  “Invasion of the Body Snatchers.” Kaufman sets the ‘50s classic in late ‘70s San Francisco where Nimoy is a master of psycho-babble whose idea of the secret life of plants has very little to do with pods from outer space. The cast also includes Donald Sutherland, Jeff Goldblum, Brooke Adams and Veronica Cartwright.

Still, Mr. Spock remains the actor’s enduring legacy.  Decades ago, when “Star Trek” was still just a cultish TV series, Nimoy ruminated on why he thought the character struck such a deep chord.

“He’s freaky, but with dignity. There are very few characters who have had that kind of pride, cool, and ability to lay it out and walk away. Humphrey Bogart played most of them.”

But none with pointed ears.