In its weekly “Look Up Atlanta” email, Sustainable Atlanta asked its followers whether the metro area is moving in the right direction when it comes to its parking policy as well as a policies encouraging more people walking and cycling in their communities.

Sustainable Atlanta’s headline seemed to answer its own question “We’re moving in the right direction.”

Here is a paragraph from the emailed newsletter:

For too long cities tried to make parking a core feature of the urban fabric, only to discover that yielding to parking demand tears that fabric apart. Parking requirements for new buildings have quietly been changing the landscape, making walking and transit less viable while inducing more traffic. After watching this video, how do you think we are doing throughout metro Atlanta? 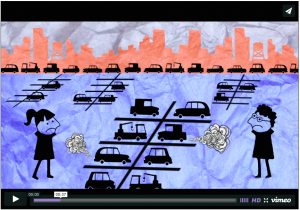 View this video from Street Films.

The “Look Up Atlanta” email also has a link to USA Streets Blog, which has an article on a recently-released study stating that people living near biking and walking paths get more exercise..

The article, written by journalist-turned-planner Angie Schmitt, referred to a study published earlier this month by the American Journal of Public Health.

Randomly selected adults were surveyed before and after new bike/ped infrastructure was built in three communities in the United Kingdom. Two of the selected communities opened bike and pedestrian bridges with well-connected “feeder” infrastructure. The other community upgraded “an informal riverside footpath” into a boardwalk during the study period. 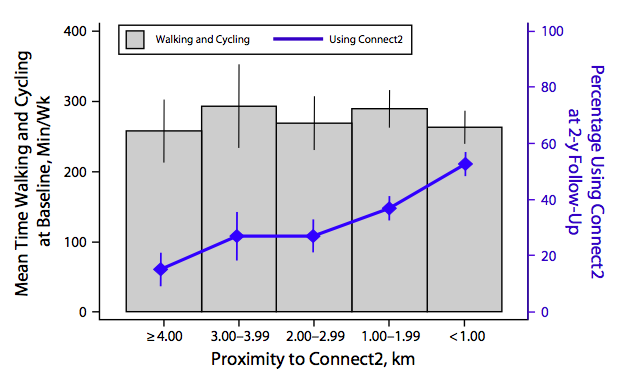 The study tracked the walking and biking habits of about 1,500 people over two years in those three communities. At first, there was no difference in the biking and walking levels of people living close to those amenities. But in the final year of the study, there was a change in behavior.

Researchers found that people living within 0.6 miles of a protected bikeway got about 45 minutes more exercise biking and walking per week than people living 2.5 miles away. For every kilometer (0.6 miles) closer respondents lived to the infrastructure improvement, they exercised roughly 15 minutes more per week. People without access to a car were most likely to exercise more in response to the infrastructure improvements.

So what does this have to do with Atlanta?

We are constantly reviewing our parking regulations – both in the city and throughout the region. The more that our leaders see the success that other cities have had when they have limited parking in their central cities, the more Atlanta has an opportunity to create a livable urban center focused around people rather than cars.

The purpose of the forum will be to “learn more about the proposed policy changes” to the city’s sidewalk maintenance program in light of the proposed infrastructure bond referendum.

The Atlanta City Council is considering an ordinance that will dramatically change the way sidewalk repairs are funded in Atlanta. If approved, the Public Works Department may no longer require property owners to pay for repairs to sidewalks that abut their property.

If approved, the proposed ordinance would be a big step forward for the City of Atlanta. But the PEDs flier did mention that there still is not a source of funding to pay for sidewalk repairs so more questions need answers.

No matter what, the question on the table remains: Are we moving in the right direction?

Previous Article
If you were at Bergen Belsen with my mother, I would love to talk with you
Next Article
Atlanta installing sustainable storm water system near Turner Field