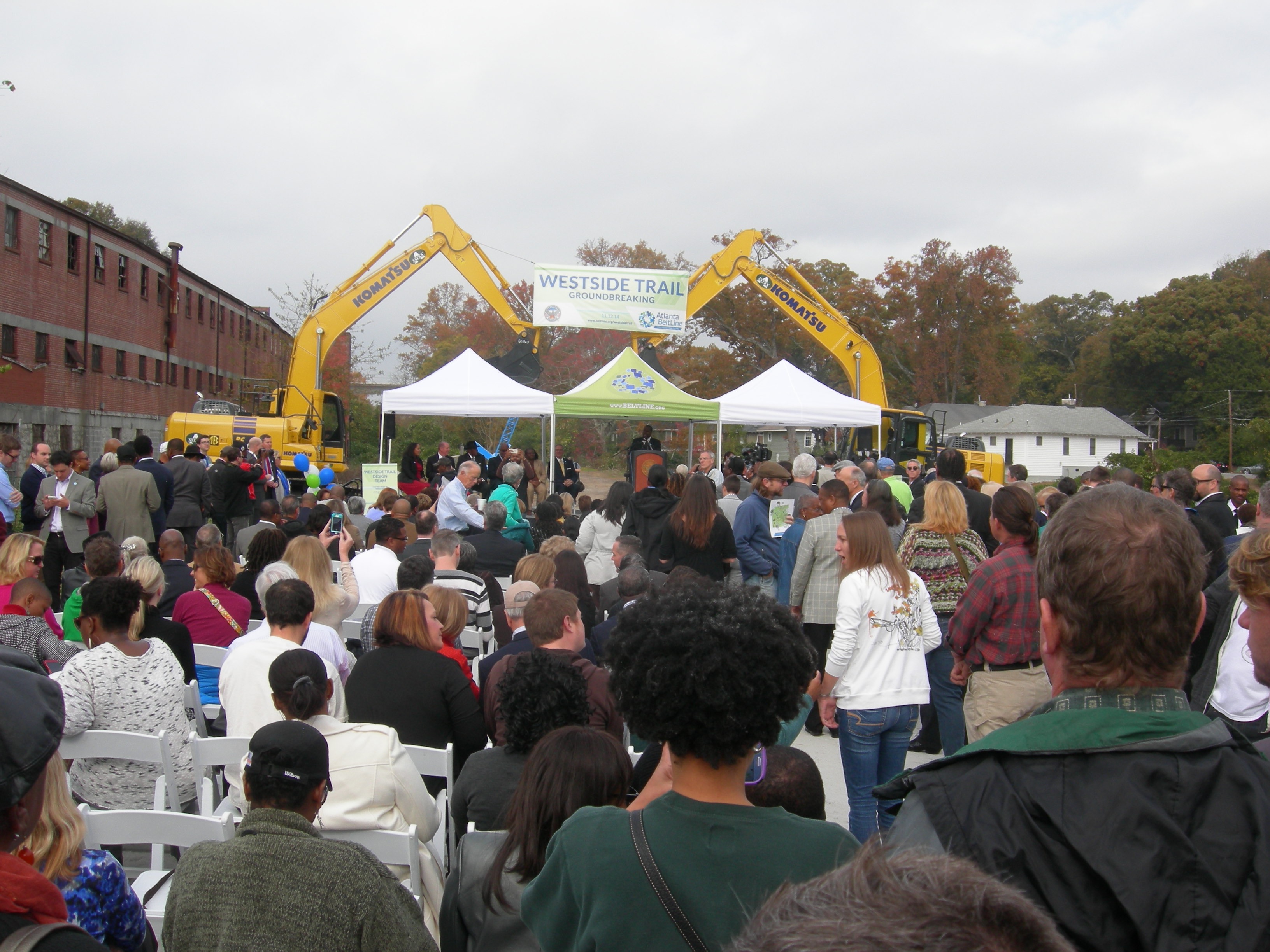 Competing statistics support a contradictory narrative of encouraging progress and a dispiriting decline about metropolitan Atlanta by vividly illustrating a widening gap between those who have and those who do not, paralleling nationwide trends.

Counterbalancing those numbers are increases in population, jobs and property prices.

Still Atlanta confronts more dubious measures that lead the nation in the suburbanization of poverty, the lack of income mobility, and by most measures, income inequality. These trends are related.

When another hot in-town neighborhood revitalizes, raising rents and property taxes in the process, its low income residents are forced to the lower-priced suburbs further out. Another thread linking these disparate dynamics is access to adequate transportation.

Recent studies at Harvard have confirmed a surprising correlation between the prospects of upward mobility out of poverty and commuting time, a correlation stronger than crime or the percentage of two-parent families, traditional indices of neighborhood distress. This stands to reason. The difference between taking multiple buses over a two-hour commute or more and a commute half that time or less via car, transit or by walking can determine whether one will be caught in a poverty trap or not. 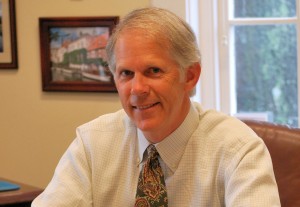 We also know that a much better metric of housing affordability is the combination of housing and transportation cost, not just a simple comparison of housing cost to income.

Seen in this light, Atlanta becomes very unaffordable, one result of our region’s historic refusal to embrace transit wholeheartedly and the outmoded growth pattern that separated residential areas from commercial ones (i.e., sprawl).

This infrastructural legacy is not only a threat to our economic prosperity, but it is wreaking havoc with much of our suburbs today, as a real estate investment tide is pouring into “walkable” nodes in the “favored quarter” stretching from Midtown to Alpharetta while receding rapidly from suburban areas cut off from economic activity and transportation choices.

“Walkability” is the hottest real estate factor shaping our urban areas today, with dramatically higher price premiums to areas only accessible by car. Walkability refers to the ability to access on foot services (grocery stores, restaurants) or job centers within a generally accepted one-half mile radius. Closely akin to “new urbanism” or “smart growth”, this trend has now evolved to represent the next wave of real estate development. But walkability is only part of the equation in remaking congestion-choked Atlanta more economically competitive; access to transit is the other. 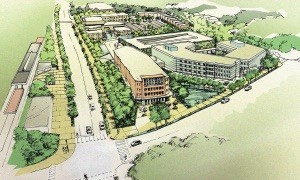 MARTA is considering redevelopment options at the Oakland City MARTA station that will include mixed-income rental apartments (Rendering: Peter Drey)

MARTA is promoting transit-oriented development (TOD) on land it owns adjacent to its stations to outstanding market acceptance. Moreover, by one study, over 80 percent of residential development in Atlanta over the past five years has been near a MARTA station, and all of the large, marque developments are near MARTA or the Atlanta BeltLine.

However, the pressing question of how many of our citizens will benefit from the energizing impact of TOD and walkability remains. The private market is transforming in-town Atlanta and other urbanized nodes, such as Sandy Springs, Alpharetta, and Marietta.

For more distressed neighborhoods—encompassing at least 25 percent of the entire city – TOD and walkability are even more important for two simple reasons. Dispensing of car ownership can save a household on average $9,000 annually (national average, all incomes), a significant sum on an annual income of $44,586, the formal threshold denoting “low income” for a family of four in metro Atlanta (2013). Secondly, lowering commuting times by having access to a job or job centers made possible by TOD can enable a family to escape the poverty trap.

Delivering this type of development into less favored areas with walkable potential will require public investment to catalyze the market. But we better hurry. Already, gentrifying pressures are increasing the cost of land near all MARTA stations as well as the BeltLine.

If the future of residential development is here and now even as Atlanta faces the prospect of an increasingly bi-furcated city – one rich, one poor – abstract concepts will not do. In an era of diminishing public subsidy, we must find real ways to cut costs in the household budget and to provide better access to job centers. Enter equitable transit-oriented development.

The Vine City and English Ave neighborhoods have been much in the news recently, both for their dreary litany of despair and for the encouraging prospect of change driven by the vision and commitment of Arthur Blank and the corporate supporters he is recruiting to help his family foundation along with InvestAtlanta to bring revitalization to these two historic neighborhoods. (These neighborhoods are next door to the $1.4 billion new Falcons stadium.) 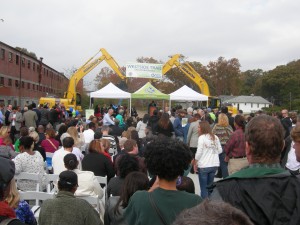 These westside neighborhoods, sandwiched in between Georgia Tech to the north and the Atlanta University schools to the south, are tantalizingly close to prosperous Midtown, Downtown, and the booming West Midtown area. They are also bookended by two MARTA stations with the BeltLine slated to run along their western boundary. In short, these neighborhoods have high walkability and TOD potential.

If the formidable social, environmental, and physical infrastructure issues can be addressed, residential development can take off, satisfying a growing market migrating in-town, looking for Midtown like convenience without Midtown prices.

The first principle to guide this work is to catalyze private development there without forcing out many long-time residents through housing cost increases, a process known as gentrification.

As the housing market, once triggered, will dwarf the impact of public investment over time, we must be intentional about trying to achieve this difficult balance up front.

A second principle is to direct precious public resources toward the goal of keeping long-time residents in their homes. Such tools as low-interest home rehabilitation loans and property tax caps can be very effective.

Third, in order to attract private investment, the Fulton-Atlanta Land Bank Authority is well positioned to both acquire and assemble developable land and to “wash” back taxes from the title.

Together, these public sector tools can catalyze private sector investment, but only if their impact is strategically concentrated–a difficult political challenge.

MARTA should be lauded for its policy of having 20 percent of housing developed on its land as affordable, and the BeltLine also has a stringent affordable housing mandate. These are good planks on which to fashion a housing policy for Vine City-English Ave which attempts to strike that balance between attracting higher income residents, with their needed disposable income, while preserving housing for the existing, almost exclusively lower-income residents.

We can label such an approach “Equitable” Transit Oriented Development. In fact, a coalition of transit providers, for-profit and nonprofit developers, government agencies, and policy experts have coalesced under the banner of the “TransFormation Alliance” to promote just this type of development in metro Atlanta.

They have the right idea at the right time and deserve support. Contact them at the following website.

So here is a “grand bargain” for our city. We can draw an analogy to the green building field. Like the savings from lower utility bills by building energy-efficient housing, foregoing a car will put cash into people’s pockets.

But the green building idea did not become widespread until the private sector realized it was profitable. Demonstrating the cost savings from lower crime rates, better school attendance, etc. stemming from revitalized communities is far more difficult because the costs are publicly born and indirect, and monetizing the gains takes time.

If we can demonstrate that public investment into “Equitable Transit-Oriented Development” will seed the ground for private profits, this idea might just take hold.

Good business plus good policy means our entire community, not just the favored quarter, will benefit.