Five “legacy” Atlanta architects came together on Sept. 21 and agreed that our city could be more beautiful.

The panel discussion, titled: Reflections — Atlanta Legacy Architects, was part of the AIA South Atlantic Region Conference that took place at Midtown’s Loew’s Atlanta hotel. It was a fitting location for five men to reflect on the evolution of Atlanta’s architectural heritage.

Tom Ventulett, chairman of the TVS (Thompson, Ventulett, Stainbeck & Associates) architectural firm, championed the message that Atlanta could and should be more beautiful.

“Our expressway system is one of the ugliest in the country,” Ventulett said.

Jerry Cooper, co-founder of the Cooper-Carry firm, did not dispute the claim, but he said: “we are probably saddled with what we’ve got.”

The lively discussion, which I tried my best to moderate, brought out the inter-connected and complicated relationships between the legacy architects — some whom had worked together, some who had competed with each other and two who actually are related by marriage.

Cooper’s wife is the sister of Stanley Daniels, chairman of the Jova/Daniels/Busby architectural firm.

Bill Stanley, co-founder of the Stanley Love-Stanley architectural firm, reminisced about the Atlanta that was — the beautiful and airy Peachtree Arcade at Five Points— now a distant memory.

George Heery, formerly with Heery International and now with the Brookwood Group, said that after the development of the interstate system, Atlanta’s population began to sprawl, leaving the urban core. Today, young professionals are moving back in, seeking an urban lifestyle where they can “live, work, play” and be able to walk, bike or ride transit. 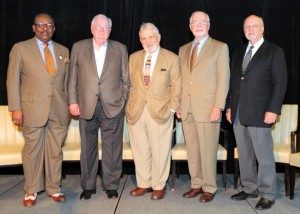 But while this transformation has taken place, Ventulett said much more emphasis should be given to our physical environment. He was particularly pleased that Atlanta Mayor Kasim Reed said he would make that a priority.

In an August interview about a possible new stadium, Reed said it was important for Atlanta to present “our best selves” to the world.

He went on to say the following:

“We in the city of Atlanta are going to be more and more focused on beauty and aesthetics. Every city that is world class — a place you want to visit or live in — cares about aesthetics.”

The architects agreed that “there are a lot of things this city can do to be more beautiful,” and they welcomed the sentiment expressed by the mayor.

They talked about the notion of “citizen architects” — professionals who want to be constructively engaged in their community. As such, they said they should be at the table sharing their thoughts about how the city can enhance its attractiveness.

“There’s no better architectural city in the United States than Chicago,” Ventulett said, adding that former Mayor Richard Daley made it a point to be actively involved in the design of buildings and public spaces to make sure they lived up to Chicago’s standards. Specifically, Daley always asked for more flowers to be part of the cityscape.

The architects also agreed that the AIA (American Institute of Architects) could serve as “a vehicle” to speak about design and the city’s beauty.

The conversation reminded me of “The New South” speech given by the editor of the Atlanta Constitution — Henry Grady — on Dec. 22, 1886, when he talked about how Atlanta was burned to the ground by Gen. William Sherman during the Civil War.

“I want to say to General Sherman — who is considered an able man in our hearts, though some people think he is a kind of careless man about fire — that from the ashes he left us in 1864, we have raised a brave and beautiful city….”

Sadly, many of the beautiful buildings that have been built in Atlanta have been demolished — Terminal Station, Union Station, Loew’s Theatre, the Carnegie Library — to name a few.

(Cooper did jokingly say there might be a building or two that he had designed that he wishes had been torn down).

But the legacy architects were quick to say that several great buildings are still with us — such as the Fabulous Fox Theatre and the Academy of Medicine.

When asked about their favorite buildings, several mentioned the High Museum of Art — both the original Richard Meier building on Peachtree and the Renzo Piano addition that turned the space into a plaza.

And when it comes to selecting architects to design Atlanta’s future landmarks, they all agreed that local architects should not be given preferential treatment.

Instead, developers should seek the “best architectural talent that they can find” and let Atlanta’s architects compete among the best.

One theme is that Atlanta — like other modern cities — is constantly evolving, providing ample new opportunities to improve its architectural attractiveness while making its street-scapes more people friendly with wide sidewalks and lush landscaping.