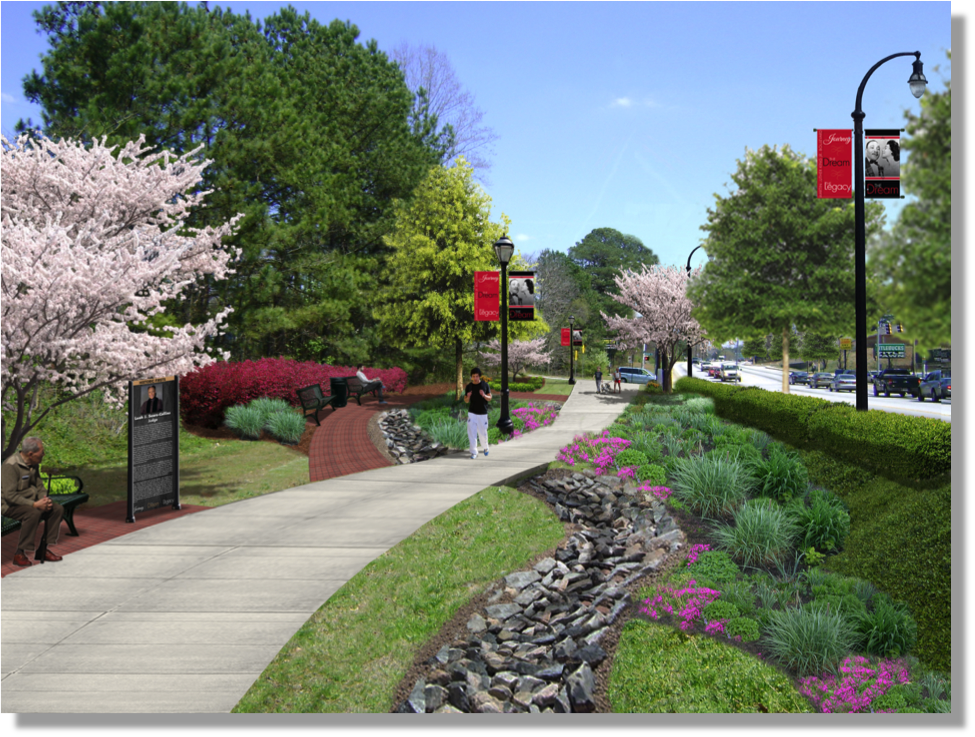 A sketch provided by the city shows a segment of a linear park planned along Martin Luther King Jr Drive from Boulder Park Dr. to Peyton Place. Credit: City of Atlanta 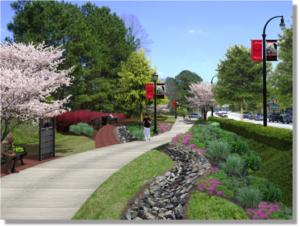 A sketch provided by the city shows a segment of a linear park planned along Martin Luther King Jr Drive from Boulder Park Drive to Peyton Place. Credit: City of Atlanta

Atlanta is looking to start a new phase of works along Martin Luther King Jr Drive, which will include giving part of the road a “diet.”

Further west, from Abernathy out to Fulton Industrial, the number of lanes won’t change. But the city is planning a section of multiuse trail along the frontage of Westview Cemetery and a segment of linear park from Peyton Place to Boulder Park Drive.

In spots all along the 6.2-miles of road, there are plans for other works like new bus shelters, raised medians, better crosswalks, landscaping and more.

That’s according to (large) city bid documents published in November. (Or check out sketches from a city presentation.)

It’s the latest segment of works for the road, which Mayor Kasim Reed has said should represent King’s legacy and stand as a source of pride and excellence for all who travel on it.

The city has already awarded a $6.5 million contract for road diet works on MLK nearer the Mercedes-Benz stadium. The long-discussed works on the whole MLK corridor will come to about $40 million, Reed said last month, which includes an $10 million federal grant.

Removing lanes to add a turn lane is meant to make roads safer. People wanting to turn left can get in a turning lane, instead of stopping in moving traffic.

Road diets can leave space for with bike lanes. When matched with improved sidewalks and better bus accommodations, the result is a so-called “complete street:” one meant for drivers as much as pedestrians, bikers and folks taking the bus as well.

But road diets and complete streets aren’t always popular. The state of Georgia considered a road diet for part of Peachtree Road in Buckhead. It would have meant part of the road losing vehicle lanes and gaining a turning lane and bike lanes.

But the state dropped the idea in the face of scorn from residents, who feared losing traffic lanes would make congestion worse.

He called the plan in the new bid documents over the 1.5 miles a “betrayal” of the community, and accused City Hall of waiting to do it when the community wasn’t watching.

“This an issue about gentrification and it needs to be seen in that context,” said Fort, who ran a progressive campaign focusing much on income inequality and housing affordability.

“These bike lanes are a gentrification indicator,” Fort said.

But for Rebecca Serna and the organization she heads, the Atlanta Bicycle Coalition, bike lines are a path to making Atlanta more accessible and livable. The ABC wants to make the city a place where biking is equitable, safe and appealing.

“Overall I’d say we’re pleased to have a segment of protected bike lanes and bike lanes for most of the project,” wrote Serna, referring to plans along the whole corridor.

“Wish we had them through the business district, but Lena Street [a parallel street a block north] is a good alternative,” she wrote. “Visibility at intersections and driveways will be key on this project. We always want to make the connections safe, simple, and continuous, so would like to see this continue to improve, but it seems like a good start.”

Last month, Atlanta’s public works director said he was hopeful that the city would be able to demonstrate that the road diet design would be safer, and win over critics.

Asked via email why there’s no road diet on the westernmost part of MLK, a city spokeswoman wrote simply, “as discussed and agreed to with GDOT,” the Georgia Department of Transportation.

The Georgia Department of Transportation controls MLK from Ralph David Abernathy to the Fulton County line.

Last month, a GDOT spokeswoman said in a written statement that “the project that is evaluating the corridor is being managed by the city of Atlanta, but will ultimately reviewed and approved by the [Georgia] Department via a special encroachment permit to complete work on state right-of-way. The details of the project’s scope will need to come from Atlanta.”

Previous Article
Column: Atlanta school gets an ‘A’ for landing jobs for its students
Next Article
Final construction funding earmarked for PATH400; construction to begin in January