Waters in north Georgia are cited in half the entries in “Georgia’s Dirty Dozen,” a list of 12 offenses to the state’s waters compiled by the Georgia Water Coalition. 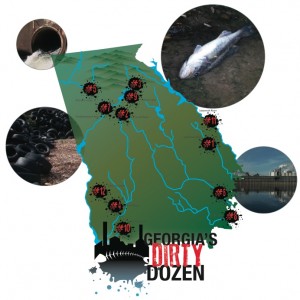 The report cites five specific waters in north Georgia that are troubled, and includes a sixth, which is a project in Gov. Nathan Deal’s Governor’s Water Supply Program.

Water advocates used the report’s release to criticize Georgia for environmental protection efforts it characterized as weak. The comments echo some made of President Obama’s interest and current focus on the environment.

The following are snippets of the No. 1 offender in Georgia, the Ogeechee River, followed by the six waters in north Georgia that were cited by the Georgia Water Coalition.

The report and press release attempt to place the water problems in the context of a state government the coalitions sees as less than supportive of the state’s environment.

“The Deal Administration’s appointments and actions suggest that enforcing environmental laws are not a priority,” Joe Cook, executive director and riverkeeper with the Rome-based Coosa River Basin Initiative, said in a statement released with the “Dirty Dozen” report. “Track the money divvied out in Gov. Deal’s new water supply program and you get further clarity about this administration’s priorities and allegiances.”

“The $102 million that Gov. Deal directed to questionable and environmentally destructive water supply projects this year is more than three times the $30 million in state dollars invested by the Georgia Environmental Finance Authority in water conservation and efficiency projects from 2006-2010,” Sally Bethea, executive director of the Chattahoochee Riverkeeper, said in the same statement.

Obama has come under fire for saying last week that job creation and the economy can’t take a back seat to global warming. That disappointment was expressed after the Sierra Club supported Obama over Romney, despite regrets over Obama’s failure to get a cap-and-trade bill through Congress.

In addition, Obama has been criticized for appointing former Iowa Gov. Tom Vilsack as the nation’s agriculture secretary because of Vilsack’s relation with Monsanto and other elements of the food industry.

Some environmentalists have expressed frustration over the state of affairs with the nation’s efforts to protect the environment.

“It’s been very difficult for Congress to do practically anything constructive in the past four years,” Karl Coplan, a law professor at Pace University in New York, said during an Oct. 17 press call to celebrate the 40th anniversary of the Clean Water Act.