Little things could improve life for neighbors of Falcons stadium

No public urination. No open containers of alcoholic beverage. No loud noises. No open grilling and no tailgating.

The same streets in Castleberry Hill that attract Falcons fans for tailgate parties are promoted by the state’s film industry. Credit: georgia.org

These requests are on the wish list for the Castleberry Hill neighborhood, a list its residents hope will be included in a pending community benefits deal for the future Falcons stadium. Quality-of-life matters are joined by bigger items, such as a community center with a museum and repairs to bridges and sidewalks.

The list is to be presented Wednesday at Atlanta City Hall, where city officials and civic leaders are to continue discussing how to allocate $30 million through a community benefits deal. Two other stadium neighborhoods can’t agree on a project list and don’t have one to present for Vine City and English Avenue.

Projects to be funded with the $30 million aren’t the only component of the potential community benefits deal. Various civic leaders are pushing for provisions including ones that:

As negotiations have unfolded since the first meeting on July 2, the main topic for those on the panel has been the allocation of the $30 million. The process for allocating the money is the major item on the Wednesday evening agenda, accounting for a planned 35-minute segment on a 90-minute agenda.

Because Vine City and English Avenue don’t have a final project list to present, the agenda calls for the Castleberry Hill presentation to be followed by the discussion about how to distribute the money. 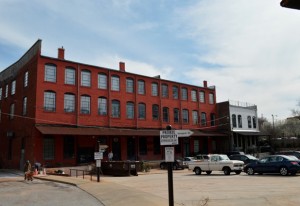 The letter cited five “benchmarks” that include:

The letter also identified what it called “mitigations,” including scheduling games at 3 p.m. or 4 p.m.; noise created by tailgating; tailpipe exhaust; and containing storm water run-off on the stadium site.

The city’s portion is funded through a special property tax district that was created in 1998 to promote communities on the west side of downtown Atlanta. According to Invest Atlanta, the purpose of the Westside Tax Allocation District Community Fund is to:

The Blank Foundation was created in 1995 to promote communities in order to help youngsters and their families, according to its website. The guiding principal of the Westside Neighborhood Prosperity Fund is to:

Previous Article
Georgia Trust’s 10 Places in Peril 2014 list has sites from all over the state
Next Article
Stadium financiers: Donate some of your profits from bond deals to poor communities, councilman says