Robert Lupton has spent 50 years of his life working as a community developer in Atlanta, mostly with people who have the greatest needs.

Back in the early 1990s, developer Tom Cousins told me I needed to get to know Lupton and write about the work he was doing with Glencastle and his nonprofit, then called FCS Urban Ministries. At the time, FCS stood for Family Consultation Services. It now it stands for Focused Community Strategies.

“Tom Cousins called me out of the blue one day and said I have this crazy idea,” Lupton told me when we met for brunch this past weekend. “You know that old golf course at East Lake. It used to be called the St. Andrews of the United States. I want to restore it to its 1930s glory. If I do the golf course, will you take on the community?”

Lupton helped advise Cousins on the redevelopment of the East Lake community along with Renee Glover, then CEO of the Atlanta Housing Authority, and Egbert Perry, founder of the Integral Group, among many others. The model of revitalizing communities through mixed-income housing, quality education, health and well-being led to the creation of Purpose Built Communities, a place-based initiative to revitalize lower-income neighborhoods around the United States. 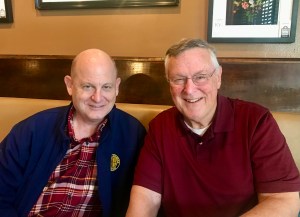 In a serendipitous encounter, John Ahmann, CEO of the Westside Future Fund, joined Robert Lupton and me to discuss the best ways to reinvigorate communities. (Photo by Maria Saporta.)

I had lost close touch with Lupton over the years. But then developer David Allman invited me, Lupton and about 20 other folks in Atlanta to go to Nicaragua to see the business-led philanthropic work he was doing. Next week I will write more about Allman’s philanthropic investments in Nicaragua.

Unfortunately, three of us were unable to board the plane in Miami for Nicaragua — Bob Lupton, Martha Brooks and me. So, Lupton and I decided to break bread when we got back to Atlanta to catch up. I wanted to hear his views on philanthropy — both at home and abroad.

Lupton has been partnering with Allman on his work in Nicaragua for the past 17 years, traveling there about 15 times. He and Allman started to work together years earlier when Allman served as a board member of FCS, now working primarily in the Historic South Atlanta, now a Purpose Built community.

As soon as we sat down, Lupton handed me over a copy of his latest book: “Charity Detox: What charity would look like if we cared about the results.” That was a follow-up on his previous book: “Toxic Charity: How the Church Hurts Those They Help and How to Reverse It,” a book that generated great controversy in philanthropic circles.

“It has become apparent that nonprofits don’t create wealth,” Lupton told me. “They utilize wealth. The whole idea of a nonprofit creating wealth is an oxymoron. It’s using other people’s wealth to help poor people. But it doesn’t move people out of poverty. It tends to entrench them into deeper levels of dependence.”

Lupton and Allman have been working together on private sector solutions to revitalize communities. Allman connected with Chicago-based Opportunity International, which has targeted microlending as a way to get people out of poverty. Shortly thereafter, Allman decided to start Opportunity Nicaragua, asked Lupton to join him on the organization’s board so they could test some of their ideas of philanthropy and the private sector.

Opportunity Nicaragua started out with a technical school to train people in two sectors — agribusiness and hospitality. Allman developed a resort in Nicaragua where students could get hands-on experience and develop marketable skills.

Along the way, they decided to create a for-profit business to help farmers sell their crops.

“If it’s got a good business plan, it can grow and develop wealth, produce opportunities to enable dirt poor farmers to become middle-class producers,” Lupton said, adding that the challenge was connecting farmers with world markets to enable them to create wealth-producing activities. 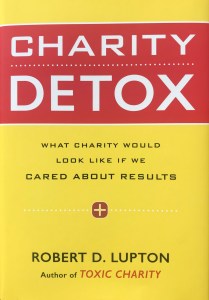 The for-profit venture  — processing the yucca plant and turning it into gluten-free flour — has been a success because U.S. companies are paying a premium for yucca flour.

But that has led to another dilemma for Lupton.

“To me, the issue we are struggling with at Opportunity International Nicaragua, is what do we do with our profits?” Lupton said. “For the first time, we have made money [about a million dollars]. We need to invest that money somewhere.”

In the white paper, Lupton explored the dilemma. “Is there an economic ‘fairness formula’ to follow?” he asked. “The socialist solution is equal pay for everyone. We all know how that turned out. The capitalist solution is ‘whatever the market will bear.’ But the proliferation of unregulated sweat shops is hardly the answer.”

Lupton said they are seeking a balance at Opportunity Nicaragua.

“We started health coverage for all employees,” he said. “We subsidize tuition for students going to the school. We can set up a scholarship fund to send kids off to college. The employees at the processing plan have just been given significant raises that put them into the top quadrant in their industry. Our employees are doing well comparatively to others in their field. Farmers are better compensated, and they are in the top quadrant of farmers in the yucca industry. That’s profit sharing.”

Lupton said there are differences of opinion on how the profits should be reinvested.

“There’s significant tension between philanthropy versus business,” he said. “The place where that tension exists is with business-level people who have marketplace skills versus the social work types who are all about helping people.”

At 78, Lupton is still exploring and thinking about the best ways to lift people out of poverty, so they are able to lead productive and rewarding lives. He was born in New Castle, Pa., and his father was a Methodist minister. He went to a small Bible college in Cincinnati, and then he was drafted and spent 1969 and 1970 in Vietnam, where he developed a strong interest in helping troubled young men. When he returned home, he was given an opportunity with Youth Guidance to open up the program in Atlanta. Lupton moved here in 1971, and he has never looked back. He got a master’s degree at Georgia State University and his Ph.D. at the University of Georgia. 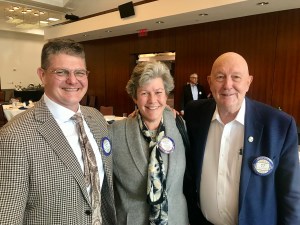 Clark Dean of Transwestern and Bob Hope of Hope-Beckham just came back from the visit to Nicaragua with David Allman. Martha Brooks (center) was not allowed to board the plane in Miami to go to Managua. (Photo by Maria Saporta.)

“I wrote my dissertation on what I was interested in — to make the environment a healthy place where families can flourish,” Lupton said. And that’s how FCS began — first working to get people out of public housing and building single-family homes. Another area that he wrestled with was gentrification. It’s good to improve communities, but it must be done without displacing the poor. He calls it gentrification with a conscience or gentrification with justice.

So after more than 50 years in this space, Lupton is still searching for answers on how to best help those in need.

“If anyone can figure out a just and workable strategy for making money with the poor, it will be successful business entrepreneurs who have become convinced that their wealth-creating ability is a spiritual gift,” Lupton wrote. “The tricky issues of wage disparity and power sharing and ownership participation — issues that confound the economies of our world — are precisely the arenas where spirit-guided wisdom is needed. Nicaragua is such a learning ground.”

When asked how the East Lake/Purpose Built model fits in his views of philanthropy and the private sector, Lupton said that multi-dimensional model of community redevelopment works.

“Purpose Built is spot on,” Lupton said. “Adequate housing and quality education are human rights, in my judgment. A system of exchange where everyone brings something to the table is more empowering than one-way entitlements.”