Cutting experts at Georgia Archives severs our access to history

Threats to close the Georgia Archives put all of us at risk of losing access to critical records – and people.

Now more than ever, skilled information diggers, collectors and guides are needed to verify the story that begins where memory and Google end. Like blacksmiths were in the early days of the automobile, the work of archivists has transformed in the information age. They’ve grown more indispensable to saving what is easily lost and finding what cannot be replaced. 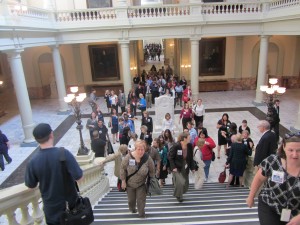 Supporters of the Georgia Archives fill the atrium of the State Capitol.(Photo credit: James Yancey).

While the governor pledged last week to keep the Archives from closing, seven archivists on its staff face their jobs ending Nov. 1. Their peers around the state rallied last week at the Georgia Capitol to tell legislators how important this repository and its keepers are to all of us.

Supporters also collected 17,000 signatures on a petition given to the governor. The Archives is only open two days a week regularly, and protesters don’t want any further limit on access.  The New York Times and Chronicle of Higher Education pointed out that its closure would make Georgia the only state without an archives.

The rest of us should care because these seven archivists represent the first line of defense in our collective history. Their fingers touch some of Georgia’s oldest, most fragile materials that researchers, genealogists and even lawyers rely on to understand how we once lived, with whom, and where.

Need a status update from 1773? For the staff at the Georgia Archives, that’s so not a problem.

They are the sherpas to us seekers. Without archivists, you cannot find what you’re looking for in the archives or even know what to look for in the first place. What’s at stake goes beyond family trees and into taxpayers’ purses and wallets.

Logo of supporters who want to keep this repository open. Georgia would be the first state without an archives, which by mandate must safekeep important records.

“In the last few years there have been a number of boundary disputes between counties,” noted Laura W. Carter, an archivist in Athens who is involved with trying to keep the Archives fully functional. “Most of these disputes are settled quickly and cheaply by a visit to the Georgia Archives and a check of the records there.

“One very expensive and acrimonious dispute was between Monroe and Bibb counties and involved the location of a large Bass ProShop and the revenues from that store. Because the documents were not at the Georgia Archives, this ended up in a lawsuit that was expensive for county taxpayers. This is an example of old records solving today’s problems.”

Most of us would not notice the loss of these experts until we really needed a record that is not available anywhere else, said Kenneth H. Thomas Jr., a historian and genealogist in Atlanta.

“More people will be affected than they realize,” said Thomas. “Topics cannot be researched, a title searched, a death certificate located, or a Boy Scout can’t work on a merit badge.”

The loss of the seven archivists represents institutional knowledge that is relevant now and in the future, not stuck in the past. Archivists who specialize in conservation and preservation aid insurance companies and local governments in assessing and recovering records after a disaster.

“The Georgia Archives has been proactive in educating government, museums, libraries, historical societies, and other entities with records in how to write a Disaster Preparedness Plan that is both preventive and covers recovery,” said Carter, who has worked at the Athens-Clarke County Library since 1974 as a librarian, and since the mid 90s as the Heritage Room Librarian.

“Hopefully there will be no disasters at organizations or governments that require assistance from trained preservation professionals in the coming months.”

As the cutbacks stand, only two archivists (director Chris Davidson and assistant director Steve Engerrand) and a facilities manager will remain, with public hours by appointment only. Their absence will hurt our children and future generations, where the next generation of archivists will need to come from. Someone needs to keep up with what we deem our most important information of record.

“In this day of ‘born digital’ records, it is even more important that records be collected and handled properly since it is easy to destroy a digital record,” Carter added. 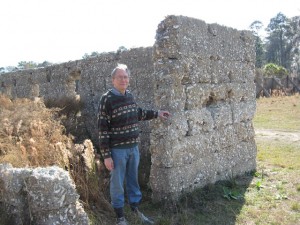 Kenneth H. Thomas Jr. had this photo made of himself at Chocolate Plantation ruins in Sapelo Island, 2012. His collection of Sapelo records faces even more limited access because of state cutbacks to the Georgia Archives.

As we know from the Internet, access is the key to knowing what is possible, especially for our future leaders. Hopefully an enterprising kid will secure an appointment at the Archives in those limited office hours. Getting in was simple in July 1963.

Thomas, 16, noted in his diary that his grandparents dropped him off at Rhodes Hall, which housed the archives (now located in Morrow). That exposure helped Thomas dive  into state history, and for the past 35 years, Thomas has written a genealogy column for the AJC, sharing with a wide audience the expertise gleaned from archivists.

In a career working for  the state Department of Natural Resources, Thomas amassed his own collection of materials on Sapelo Island, including interviews with the slave descendants who live in Hog Hammock. He processed the collection and donated it to the Archives. Cutbacks mean Thomas cannot easily access what he spent so many years collecting.

We’re all like him, facing a shrinking window into Georgia history, with fewer trained specialists to keep it open. If you’re unhappy with this unfortunate transformation, you can find out more about saving the Georgia Archives and its staff here.

Michelle Hiskey is a freelance writer and writing coach based in Decatur. She can be reached at michelle.hiskey@gmail.com.