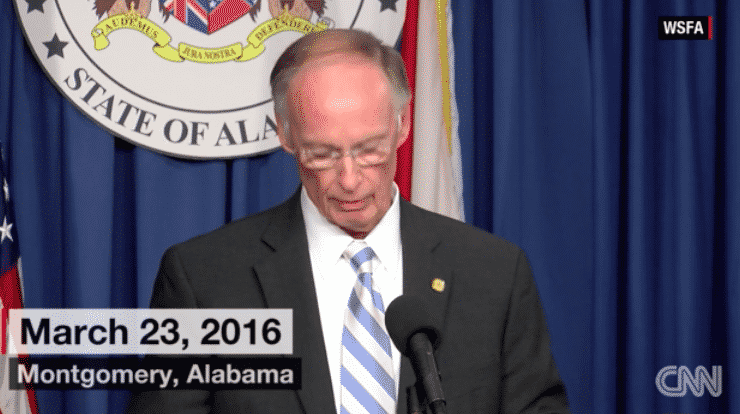 More than once over this past dozen weeks, it has occurred to me that growing up in Alabama during the days of George C. Wallace might have been the best preparation anyone could have for the presidency of Donald J. Trump.

There are obvious differences, but the ceaseless appeals to wounded pride, the pageant of small-scale job creation, the nagging suspicion the man might not truly believe the things he gets people whipped up about — all that feels very familiar.

You wonder, then, what lessons children growing up in Alabama today might draw from the public spectacle unfolding before them.

Of the six governors elected since the end of Wallace’s long reign, two had been convicted, until this week. With the plea deal on two misdemeanor charges and resignation of Gov. Robert Bentley — the “luv guv,” as he’s come to be known — the conviction rate went up to 50 percent.

Last week, the Alabama Ethics Commission ruled there was probable cause Bentley violated ethics and campaign finance laws in his efforts to cover up an affair with an aide, Rebekah Mason. A day later Jack Sharman, the special counsel for the Alabama House Judiciary Committee released its impeachment report, ahead of hearings this week and after a judge had blocked efforts by Bentley’s lawyers to delay the report’s release.

Last week Bentley apologized again to the people of the state for his behavior, but denied he’d done anything illegal and insisted he was determined to hang on through the rest of his second term. By midday Monday there were reports his lawyers were working out a deal for him to resign by mid-week, and in the time it took to write this column even that brief tenure slipped away.

By sundown, Lt. Gov. Kay Ivey had changed her Twitter account address and been sworn in as the state’s second woman governor (the first of course being Lurleen Wallace). Bentley had had his mug shot taken, and briefly posted online, at the Montgomery County Jail, where he posted bond on the charges. An indignity, but a better fate than former Gov. Don Siegelman, who was led from a federal court room in shackles.

Why the swift collapse? The impeachment report is a remarkable document, not only for its salacious details, which we will get to shortly, but also for its place in the larger dispute between executives and legislatures which is unfolding at several levels in this country.

Bentley’s claim that his due process rights were being violated by the investigation into his personal affairs was “apparently based on his conception of the Office of the Governor of Alabama as his personal private property,” the report said, in characteristically tart language.

As for the other stuff, you couldn’t make it up, or if you could, you could be winning Emmys for it. Bentley gave his state-owned iPad to his now ex-wife, unaware the device was synced to his state-owned cell phone. Every message he and Mason exchanged was read by his wife, and ultimately became exhibits in the report.

They go on and on.

“You handsome wonderful amazing delicious funny sweet man,” Mason writes to her boss, three decades senior. “You are wonderful my sweet love,” he replies. There are frequent emojis. “Bless our hearts, and other parts,” she writes.

Less comical are the allegations that an aide to the former first lady was threatened and harassed after helping her boss gather evidence of the governor’s infidelity. Bentley’s claim that his indiscretions were only a personal matter comes under withering attack in the impeachment report, and at some level he must have known that he couldn’t carry it off. Was he guilty of anything that Bill Clinton didn’t do? That’s one that can be tossed around at the Saturday morning Republican club meetings, but Bentley understood he was up against a bipartisan committee intent on bringing to an end the scandal which has smoldered in the state for over a year.

At 72, the new governor is two years younger than her predecessor, but she has much more experience in state government than Bentley, a dermatologist who won as an outsider after only a couple of terms in the legislature. Ivey by contrast ran her first race, for state auditor, in 1982, the year Wallace won his last governor’s race. She ran as a Democrat but later switched parties and was elected state treasurer and lieutenant governor. Let’s see what kind of example she can set for the children of her state.

Previous Article
The ATL Tour showcases rising talent in healthcare and technology
Next Article
DARE to Dream Big: Break Free of Your Comfort Zone to Reach Your Full Potential