Liam Neeson and his son, Michael Richardson, in a poster of the movie "Made in Italy"

But like a cheap knock-off of a trendy gadget, it might as well be tagged “Made in Japan.”

Liam Neeson stars as Robert, a once-celebrated artist, doomed to a gruff reclusiveness by personal demons and the tragic death, years earlier, of his beloved wife. Instead of picking up a paintbrush, he’s more likely to pick up much younger women, named Jessica or Jennifer or something. 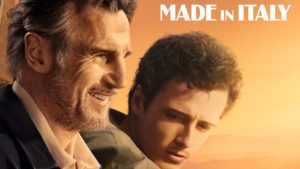 Liam Neeson and his son, Michael Richardson, in a poster of the movie “Made in Italy”

His estranged son, Jack, played by Neeson’s real-life son, Michael Richardson, is similarly at sea. His job as a gallery manager in a posh section of London is about to disappear. The space is owned by his soon-to-be ex’s parents, and along with the divorce papers, she’s delivered the unhappy news that they intend to sell the place.

Jack decides to buy the gallery himself, but his only way to raise some quick cash is to get back together with his dad and get him to sell the family’s long-abandoned vacation villa in Tuscany.

So, it’s off to Italy where, if you’ve seen “Under the Tuscan Sun,” they discover a suitably (for movies) distressed mansion with magnificent views and lousy plumbing. And, if you’ve seen Russell Crowe’s “A Good Year,” they encounter a suitably spunky (and gorgeous) local (Valeria Bilello), who owns a restaurant in the nearby town.

Gosh, do you think that, after they spruce the place up, they’ll keep the villa and move to Italy? 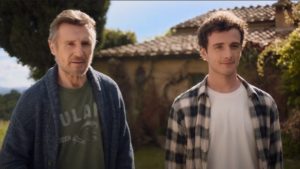 A scene from “Made in Italy”

Ah, but then there’d be no movie and, well, that’s the problem here. There really isn’t much of a movie. There are luscious Italian dinners and some clumsy renovation slapstick and a plethora of adorable villagers and melancholy strains of unexamined grief between father and son.  But while none of it is offensive or painful, none of it is especially entertaining either.

As some of you might remember, Natasha Richardson, Neeson’s wife (and Richardson’s mother), died tragically in a skiing accident in 2009.

So, there’s something slightly unsettling in the picture’s exploration of the characters’ shared grief. Further, father and son have no chemistry. Or maybe it’s that, despite his blessed DNA, Richardson isn’t all that talented. Perhaps trying to match his kid’s low-ball efforts, Neeson comes off as similarly wooden.

With its delicious cast and setting, “Made in Italy” promises a lot but delivers very little. It’s as if someone decided he or she wanted an all-expenses-paid Mediterranean vacation, and this was the best way to do it.

“Made in Italy” is available to be viewed on Amazon Prime Video.