Everyone who travels by vehicle through metro Atlanta has an interest in the managed toll lane system the state is to build in Cobb and Cherokee counties. 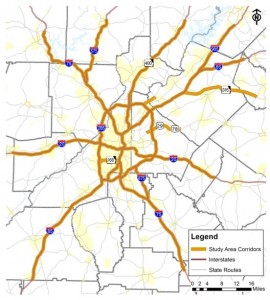 More than 150 miles of managed lanes are in the region’s long-term transportation plan. This map shows the corridors that GDOT is reviewing. Credit: GDOT

The system is likely to become the model of how drivers and the communities adjacent to the toll ways will interact with Georgia’s new method of expanding highway capacity in metro Atlanta. More than 150 miles of managed lanes are planned for metro Atlanta, according to the long-range transportation plan approved by the Atlanta Regional Commission.

A lot of little steps being taken just now are to lead to a new method of highway construction and travel in metro Atlanta. Agencies including the State Road and Tollway Authority, Georgia Department of Transportation, and their private sector partners are trying to devise a new paradigm.

The approach comes with questions ranging from the equity for users to the extent to which managed lanes will facilitate development of the distant reaches of the Atlanta region, according to Brian Gist, a lawyer with the Southern Environmental Law Center.

“The northwest corridor managed lanes represent a decreasing rate of return on an investment of almost $1 billion,” Gist said. “The managed lanes will accommodate from 5 to 10 percent of drivers. They will have no impact on the remaining 90 percent of the folks using the other lanes. One question is: What is it delivering, in terms of performance, for the $840 million to be invested.”

Despite such concerns, the state is moving forward with this project and a managed toll road project along I-75 in Henry County. GDOT says the northwest corridor project is the largest project in its history.

One innovation being devised by the State Road and Tollway Authority aims to allow customers who prefer to pay cash to have multiple payment methods. In addition, SRTA has hired a public relations company, Porter Noveli, to help market the Peach Pass and handle other communications issues. The firm has helped handle the Clean Air Campaign for a decade.

Meanwhile, the state Department of Transportation is devising final terms of an $840 million contract with its private sector partner. The state is developing a collaborative approach with a private company on a project method called design-build-finance.

At the neighborhood level, residents and business owners are trying to figure out how they will live with the noise and cut-through traffic related to a highway that’s to be widened ever closer to their homes and other interests, according to public comments filed with GDOT. Issues such as the scale of noise-reducing walls are still being addressed.

The toll road to be built in the I-75 and I-575 corridors represents an important caveat in Gov. Nathan Deal’s view of adding highway capacity: Tolls will not be applied to existing lanes that are converted into managed lanes.

Deal learned from the state’s experience after tolls were applied to existing lanes along I-85. Public outcry prompted the governor in 2011 to reduce tolls and change way the lanes are managed.

Despite the public criticism, SRTA has received awards for its implementation of the I-85 HOT lanes, according to a statement released in July.

The International Bridge Tunnel and Turnpike Association presented SRTA with its 2013 Toll Excellence Award in Customer Service. The statement from SRTA says SRTA was recognized for:

SRTA also received a “Project of the Year” award in the government category from the Atlanta chapter of Project Management Institute. According to the same SRTA statement, PMI recognized SRTA for: