Florida fights a lot over water. Florida is fighting Georgia in the U.S. Supreme Court for more water from the Chattahoochee River basin. Last week, some Florida residents lost their battle to prevent more water from being pumped from a basin north of Tampa that’s home to more than 700 West Indian manatees.

Gil Rogers, the Atlanta-based director for Georgia and Alabama of the Southern Environmental Law Center, characterized last week’s battle in Florida as an example of the mounting pressure on water. The once-plentiful resource of the Eastern Seaboard has become quite precious.

“We’re seeing a trend of a lot of growth occurring in areas that are not water rich,” Rogers said. “As we keep adding people to water-strained regions, we will have more challenges down the road to manage river systems to keep them healthy and to provide water to everyone who needs it.”

The situation in Citrus County, Fl. may not have a direct connection to Atlanta or Georgia. However, it is a case study of how a state Legislature, a state water management agency, and everyday citizens are coming to grips with a natural environment that’s been degraded before they even started trying to improve it.

Mark Hammond said as much about the water quality of the Crystal River/Kings Bay basin. Hammond directs the Resource Management Division of the Southwest Florida Water Management District. 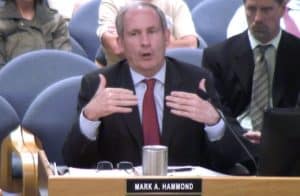 “The [river] system has been significantly altered and impacted,” Hammond said. “Kings Bay is not what it used to be. That’s a fact.”

More than 25,000 septic tanks are located in the spring shed system, Hammond said. Shutting off all the wells that serve residential, industrial and agricultural sectors wouldn’t add enough water flow to improve the water quality in Kings Bay, he said.

Citrus County’s population grew by 21 percent in the first decade of this century. The county added about 23,000 persons to a population in 2000 of 118,085, according to a report by the Census.

Citrus resident Wayne Clark laid the water degradation at the feet of the new residents and growing water consumption by agri-business. 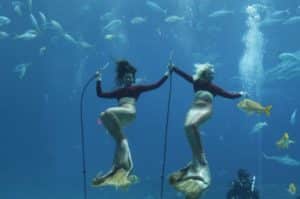 The mermaid show at Weeki Wachee Spring has been a roadside attraction since it opened in 1947. This spring is part of the network that includes Crystal River/Kings Bay. Credit: mudraa.com

Hammond and Clark spoke during the May 23 board meeting of the SFWD. The issue was a state proposal to set a minimum flow level for the Crystal River/Kings Bay basin. State scientists recommended the minimum flow level be set at 89 percent of its current flow.

More than 30 citizens came to comment. Most opposed the plan. The most common complaint was that the flow should not be impaired in hopes that water clarity will return to the basin. In the end, the board voted overwhelmingly to set the limit at 89 percent.

The board was compelled to act. The Florida Legislature required a minimum flow limit to be set by July 1. 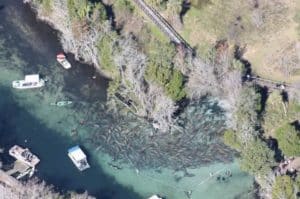 Manatees crowd into a cove at Three Sisters Spring in Kings Bay. Locals say Three Sisters is one of a handful of springs in the basin that still has crystal clear water. Credit: FFWC via miamiherald.com

The Crystal River/Kings Bay basin is located about 90 miles north of Tampa. It’s designated as a National Wildlife Refuge, and it’s home to fresh water springs with crystal clarity that attract SCUBA divers from around the world. The neighboring network of springs includes Weeki Wachee Springs, where mermaids – women wearing fish tales – performing underwater theatrics have been a staple of the Great American Road Trip since 1947.

Manatees were downlisted from endangered to threatened, as of May 5, under the federal endangered species act. Their numbers are rising and their habitat is improved, according to the U.S. Fish and Wildlife Service.

Still, many long-time residents testified that the water clarity of Crystal River/Kings Bay is getting so poor that manatees can be seen only in certain locations. That threatens a tourist industry that employs some 4,000 workers, which is 20 percent of the job base in Citrus County, according to Adam Taylor, tourism director for the Citrus County Visitor and Convention Bureau. 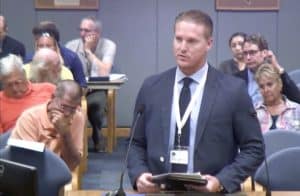 “Water clarity has deteriorated to a cloudy green mess,” said Tayor, who once pitched for a farm team of the Los Angeles Dodgers. “This is unacceptable to us and our industry. We urge a cautious approach to this matter and [setting a water flow reduction] of 3 percent.”

Board member John Henslick said the board’s hands are tied by the Legislature. The board is required to set a standard that’s based on science. The staff scientists recommended a minimum flow standard of 89 percent.

“For us to go from 11 percent [reduction] to 5 or 3 percent would take us out of the realm of science,” Henslick said. “We wouldn’t be doing what we were tasked with doing, in my opinion.” 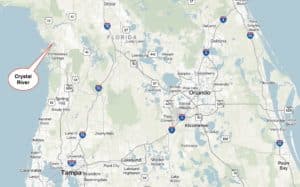 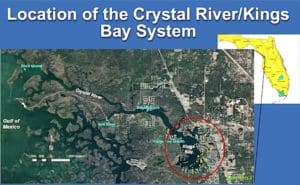 Water from spring-fed Kings Bay mixes with salt water from the Gulf of Mexico in Crystal River, creating a habitat for a wide range of animals. Credit: swfwmd

Previous Article
“I Quit!” Predicting When and Why Employees Quit
Next Article
The Stories continue