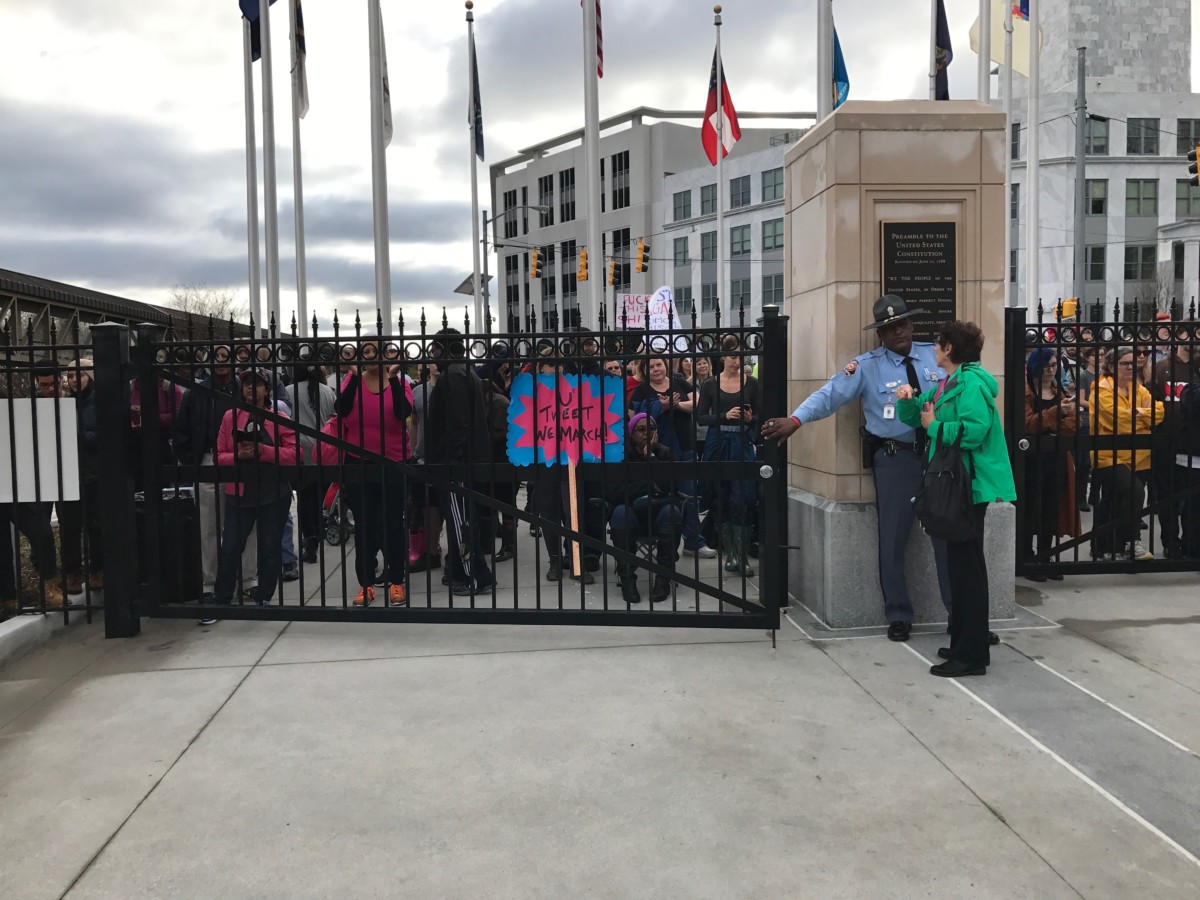 Atlanta is a city known for peaceful protests and a commitment to civil and human rights.

As evidence of Atlanta’s legacy, Saturday’s March for Social Justice and Women attracted more than 63,000 people to walk from the Center for Civil and Human Rights to the State Capitol.

The peaceful spirit for a more inclusive society was in full force – until the marchers arrived at the State Capitol.

That’s when marchers were corralled to walk towards the fenced-off space inaccurately called “Liberty Plaza.” For whatever reason, state patrol officers limited access to Liberty Plaza to just a small portion of the marchers – and that was despite having lots of empty spaces that could have held thousands more. 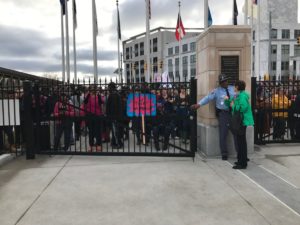 As a result, people outside the fence could not hear any of the speeches that were meant to comfort and inspire the masses. Many people were upset they couldn’t get in – urging me to write about the lack of liberties they faced when they tried to enter Liberty Plaza.

The state patrol said they were just following orders, but they didn’t disclose who were the people making the decision to limit access to the area that supposedly had been designed for people to gather.

After Saturday’s experience, one fact is abundantly clear – the space the state has set aside for protests and public gatherings does not work for the people.

Admittedly, I have never liked the idea of relegating the people to a space on the back end of the State Capitol – an area that seems designed to push the public to a space that is largely invisible.

(I also don’t like the plan to put a statue of Martin Luther King Jr. at Liberty Plaza for the same reason. As one of the greatest leaders to ever come from Georgia, King’s statue belongs on the front grounds of the Capitol – ideally near former President Jimmy Carter). 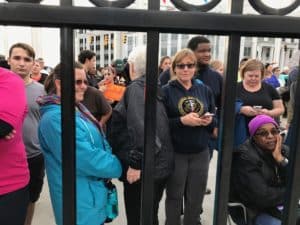 I remember back in the late 1960s and early 1970s walking to those very steps to advocate for civil liberties and against the Vietnam War. I also remember the State Patrol encircling the Capitol building – on guard in case the crowds got out of hand.

To be fair, no one anticipated that Saturday’s march would attract the turnout it did.

Organizers of the Atlanta march expected that maybe 10,000 people would show up. Then when the Saturday morning thunderstorms were in full force, they decided that even if just several hundred came, it would still be a success.

Instead more than 63,000 people showed up (some estimates were as high as 75,000), and they were united by the sense of a new movement taking hold – one that also was blossoming in cities around the country and the world.

“What happened today was that all races and all genders – including LGBT – came together to stand for change, to stand for democracy and unity,” said Tharon Johnson, a public policy professional with the Greenberg Traurig law firm. “I’m so proud of the organizers, but more importantly I’m proud of the tens of thousands of women and men who showed up in the rain to peacefully protest for equality and for all of mankind. We must continue.” 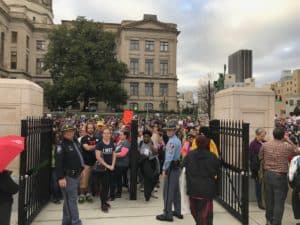 That feeling of optimism was echoed by Stephanie Davis, a longtime Atlanta feminist who helped the organizers secure dignitaries as well as outreach to like-minded organizations.

“It was fabulous, and it was so diverse in every way – in age, in race and in every way except politically,” Davis said. “The organizers were very clear it was not going to be an anti-Trump protest. It was jubilant because people feel empowered when they feel they are not alone.”

They certainly were not alone. “Organizers were overwhelmed by the response,” Davis said. “They were so brave to take it on.”

But both Davis and Johnson had issues with the way Liberty Plaza worked (or should I say didn’t work) for the destination of the march.

“It was disappointing that we had the marchers who walked two miles to Liberty Plaza and they were shut out and not allowed to come in within the Plaza,” Johnson said. “We must change that and make sure it never happens again for people who peacefully want to march and gather to express their voices.” 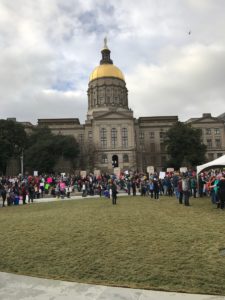 Davis also said that part of the problem might have been an inadequate sound system, but the space does not create a natural amphitheater or podium so that voice could carry over to a large audience.

“Having it at the state Liberty Plaza restricted us,” said Davis, who would have preferred for the marchers to just take over the steps in the front of the State Capitol. But the Capitol police had blocked off the street leading to the front steps.

By comparison, Davis said the Atlanta police were friendly and supportive to the marchers – obviously having gained experience on how to manage protesters during the Black Lives Matter events that took place last year.

Stacey Abrams, the state’s House minority leader, was one of the speakers at Liberty Plaza. And she pointed to the State Capitol saying it was supposed to be the People’s Capitol. At its best, government is by the people and for the people.

When asked why Liberty Plaza had been closed off to marchers, Abrams said she didn’t know who had made that decision and that she would look into it.

In short, Georgia would be smart to rethink the whole idea and design of Liberty Plaza. Instead of making the public feel unwelcome, Georgia should celebrate the multiple voices and individuals who add a richness to our society, our city and our state. 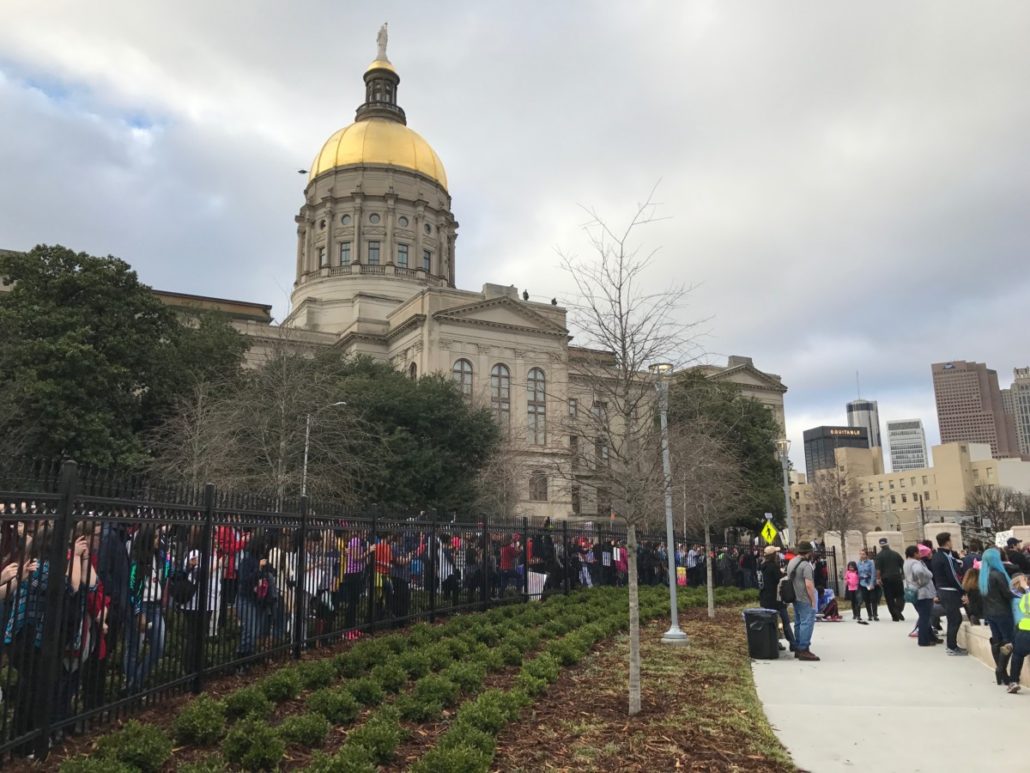 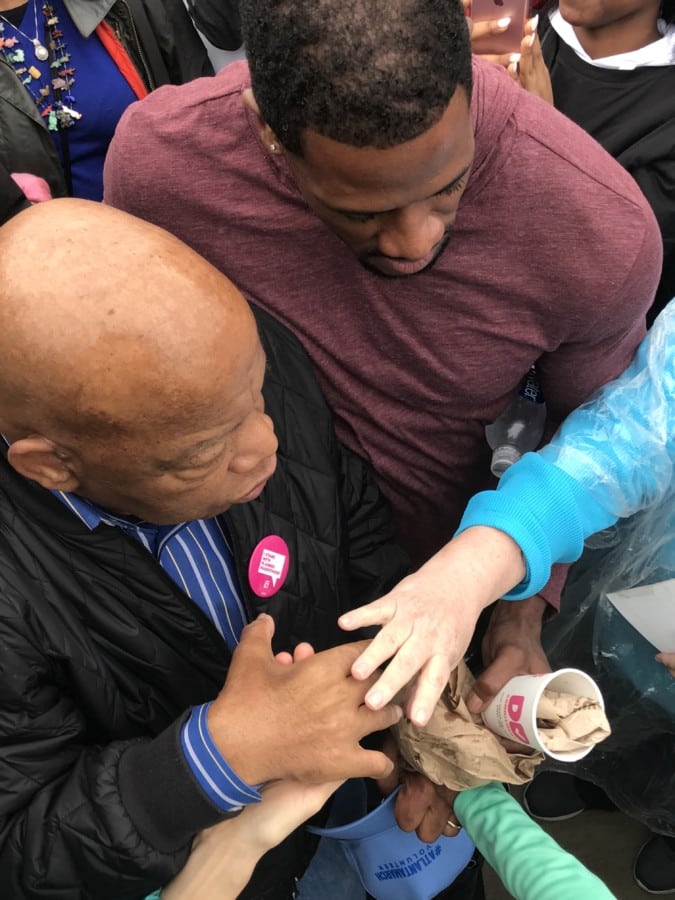 Hands of peace reach out to U.S. Rep. John Lewis – one of the main speakers at Saturday’s march (Photo by Kelly Jordan) 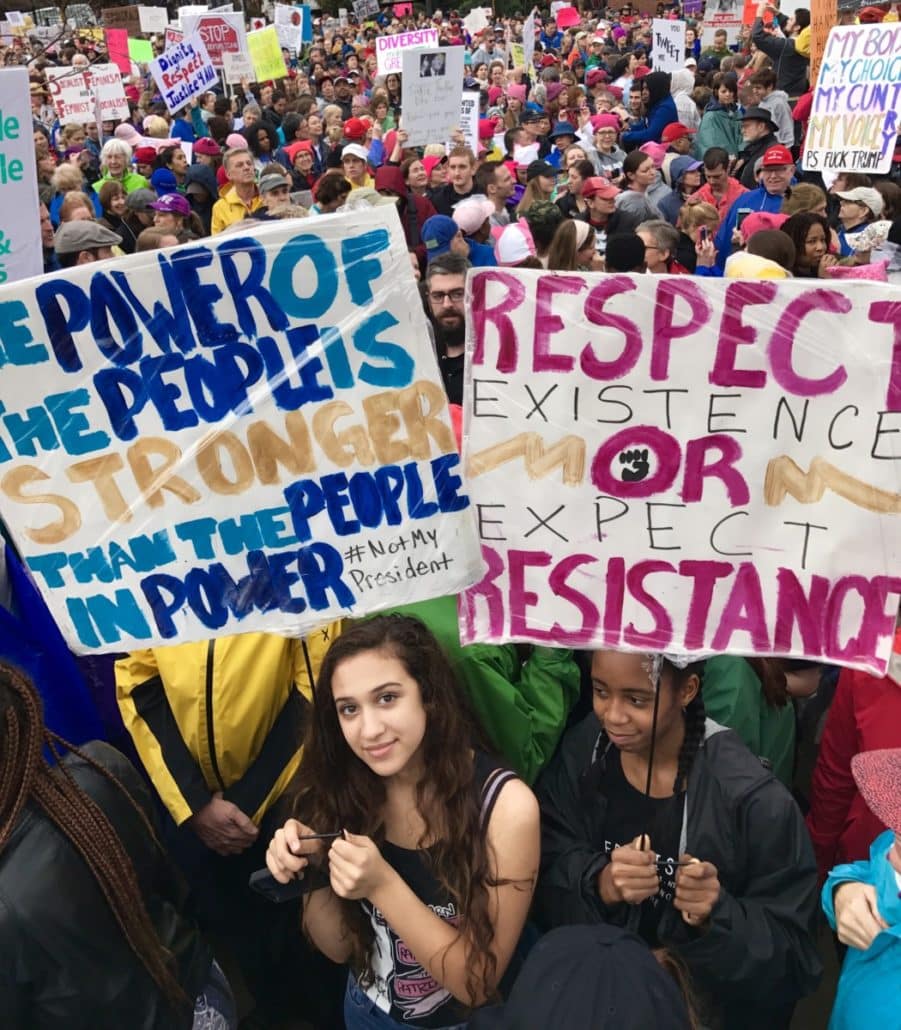 These two women’s signs say it all: “The Power of the People is Stronger than the People in Power” and “Respect Existence or Expect Resistance” (Photo by Kelly Jordan) 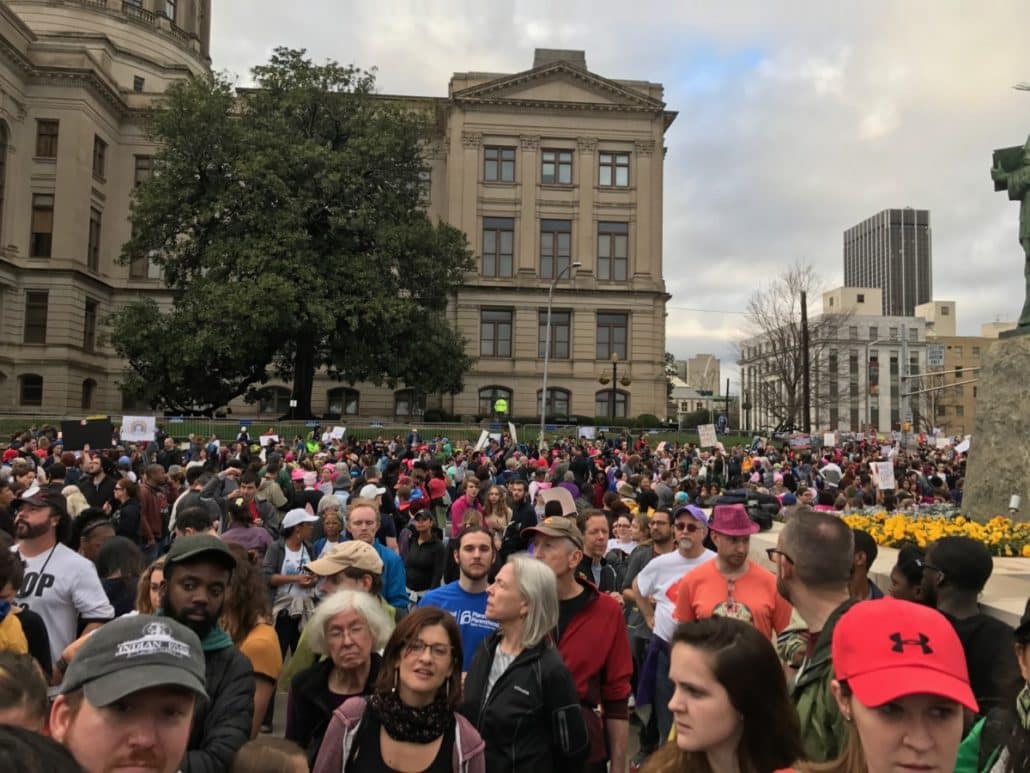 Thousands of people march to Liberty Plaza, but then are not allowed to enter. Many turned around and left (Photo by Maria Saporta)