My son, David Luse, graduated from Georgia College & State University in Milledgeville on Saturday — an occasion that gave me an opportunity to reflect on the passage of time — both in our personal life as well as the in the evolution of our state.

For those of you who do not know the beauty and gentility that exists in historic Milledgeville — do yourself a favor. The county seat of Baldwin County was Georgia’s first state capitol, and the town is full of treasures that predate Gen. William Sherman’s march through Georgia. 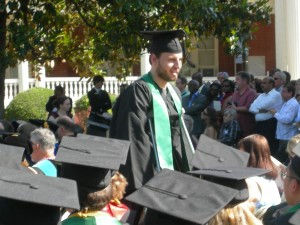 Georgia College is wonderfully placed in the heart of the town, and Milledgeville has become a college town on a manageable scale. The college has become one of Georgia’s top public universities. With a student body of about 6,000, Georgia has been a nurturing and intellectually stimulating place for David — a place where he has grown into a fabulous young man.

So consider this column a thank you to Milledgeville and to Georgia College — Georgia’s public liberal arts university that is one of the state’s best kept secrets. 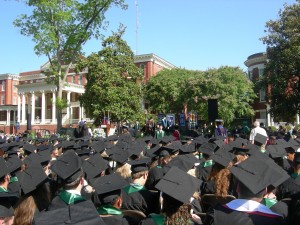 I am a proud mother, and I could write this whole column about how the wonders of a son becoming a man during an era that has challenged all of our souls.

And yet, spending a weekend in Milledgeville also has given me an opportunity to appreciate the beauty of the past while bemoan the kind of environment that we have built in the last 50 years. 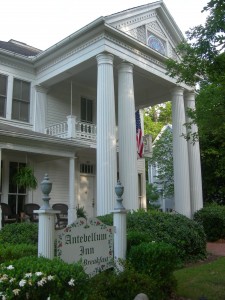 The beautiful and elegant Antebellum Inn in Milledgeville

On Friday night, my sister, Elena Saporta, and I spent the night in one of the car-oriented motel-hotels along Highway 441 — a commercial corridor full of strip shopping centers only a couple of miles outside of central Milledgeville.

By comparison, the elegance and soul of Milledgeville rests in its historic heart — where Southern mansions and beautiful trees — from magnolias to oaks — provide visual and environmental comfort. 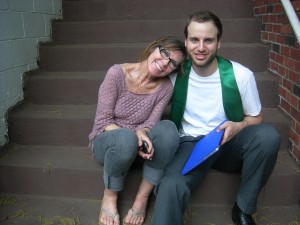 On Saturday, we were fortunate to be able to stay in the most wonderful place in town — the Antebellum Inn — (several months ago it had already been fully booked for the Friday night before graduation).

The bed-and-breakfast is only a block away from the college and just a couple of blocks away from the Hancock Street — the commercial core of the town.

Now this is place where one wants to linger — where one wants to savor the smells of gardenias and feel the refreshing shade from the old growth trees. Large porches with rocking chairs. Sidewalks full of people. Places built before air-conditioning with natural ventilation and built-in shade. 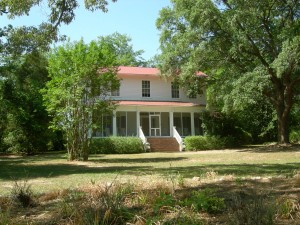 I’ve been staying at the Antebellum Inn since David started going to Georgia College four years ago. Jane Lorenz, the owner, has become a welcome friend and a real asset for the Milledgeville community.

Unlike the commercial strip on 441, downtown Milledgeville is a place that draws tourists. They come to see the old governor’s mansion and the historic homes. Historical markers are sprinkled on almost every block — giving context to our past and present. 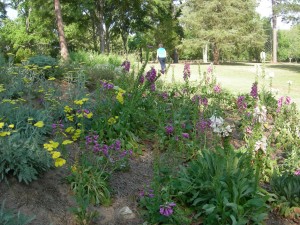 A garden at Lockerly Arboretum in Milledgeville

During this weekend visit, we were able to visit two other attractions in the Milledgeville area. We went to see Flannery O’Connor’s home — Andalusia — where she spent the last 14 years of her life — her most productive years as a writer.
We also went to Lockerly Arboretum, a public garden and horticultural educational center. The property includes the Rose Hill Mansion, which was built in 1839. and was said to have been given its name because of the Cherokee roses that decorated the site.

On our way back to Atlanta, Elena and I visited several historic downtowns — Eatonton, Madison, Rutledge and Social Circle — and we were taken by the unique spirit of each town center. Again, it was a stark contrast from the anywhere U.S.A. commercial strips that all look painfully alike. 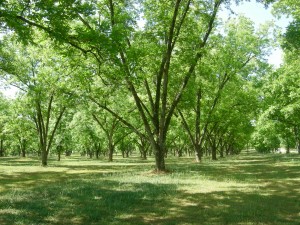 A pecan grove between Madison and Milledgeville

Elena and I are both “city girls.” She lives in Cambridge, Ma., and I’ve been living in the center of Atlanta my whole life.

Our visit on back Georgia roads reconfirmed what I’ve always felt. The most appealing places are not just cities and vibrant historic town centers. They also are those great expanses of nature — pecan groves, national forest, state parks, farms and pastures with bushels of hay. 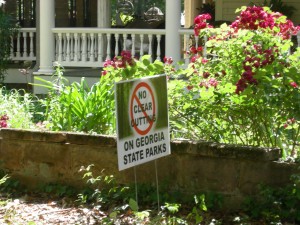 Spending the weekend in Milledgeville during a momentous time in my son’s life just reinforced what’s most important in our personal lives and in our communities.