MARTA’s general manager is sharply questioning the way costs are being calculated for transit systems in the proposed penny sales tax for transportation.

The cost estimates for transit include 20-years worth of maintenance and operational costs. The estimates do not include any revenues – nothing from fares, federal transportation sources, or even local property taxes, such those that pay for shuttles at Atlantic Station. 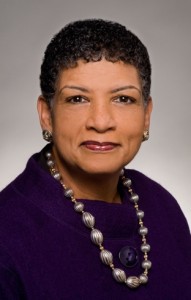 Beverly Scott was named in 2007 as MARTA's GM and CEO.

Beverly Scott, MARTA’s GM and CEO, said she intends to provide a counterpoint to the current cost estimates for new transit.

“When you talk about what the split should be [between roads and transit], when you see prices on transit become enormously big, it has an impact on what people will want to build because transit becomes so much more expensive,” Scott said.

Scott raised the issue at a July 21 meeting of the executive committee of the Atlanta Regional Roundtable. The roundtable has until Aug. 15 to approve a draft list of projects.

The roundtable’s planners said the estimates include maintenance costs because of a similar provision in a federal transit program. They said revenues were not included because they could be calculated later.

Scott expanded on her position in an email this weekend:

“I do not agree with use of a federal 20-year operations and maintenance standard that exists for a very important, but relatively small, discretionary federal transit program (New Starts) as the ‘standard’ for a 10-year regional sales tax referendum that is not factoring in any dollars from that particular federal transit funding stream,” Scott wrote.

New Starts is a discretionary program by the Federal Transit Administration that helps pay for systems that provide rail or bus rapid transit programs.

Scott wrote that she agrees with the idea of not counting on New Starts dollars to help pay for establishing any new transit as part of the proposed sales tax. And she wrote that some provision should be provided to pay for the maintenance and operations of new, 50-year transit programs.

But she opposed the idea that the proposed sales tax would be expected to cover future maintenance and operations costs. Especially when cost estimates for proposed roads do not include any maintenance costs.

“I hope that we are not looking to inordinately burden this initial investment in our future (‘down payment’) with an unrealistic portion of that responsibility,” Scott wrote. “I haven’t seen a total calculation for this 20-years of [operations and maintenance] but it has got to be hundreds of millions of dollars that are being ‘tied’ up – at least,” Scott wrote.

After Scott voiced her concerns at the meeting of the executive committee, three advisors to the committee responded to Scott’s inquiry – Jane Hayse, chief of transportation planning for the Atlanta Regional Commission; Todd Long, planning director at the state Transportation Department; and Kirk Fjelstul, chief counsel to the Georgia Regional Transportation Authority.

Here are snippets of their responses:

Committee Chairman Bucky Johnson, who’s the mayor of Norcross, moved the conversation forward during the meeting.

“Numbers can be adjusted in this situation, as far as I can tell,” Johnson said. “It wouldn’t necessarily be the same for each project. That’s going to take some conversation.”

Scott wrote in her email that she thinks roundtable members remain open to discuss which projects should be on the list voters will face on the ballot in July 2012. And she ended her comments on the question of how to pay for maintenance and operations of future transit systems with this observation:

“Bear in mind that the central issue of how much of a new regional transportation tax should be tied up to support existing transit services is an equally critical and important regional discussion that warrants open discussion and consensus.

“Once again, all long-term transportation operations and maintenance costs are going to be costly – and who should pay what portion for how long based on what criteria (some type of performance criteria and standards) are critical questions that need to get on the table and quickly.”