MARTA board chair calls “time” on senator amidst comments on GDOT, lawmakers who opine on MARTA

Sen. Vincent Fort and human rights advocate Joe Beasley took the MARTA board to task Monday, urging it to maintain its independence from Gov. Nathan Deal and the Legislature regarding MARTA’s fiscal management and selection of a new CEO/GM. 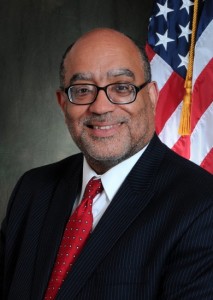 As Fort was calling for MARTA’s critics to be as watchful of the state Transportation Department as they are of the transit system, MARTA board Chairman Frederick Daniels asked him to stop his remarks, in observance of the regular two-minute time limit for public comments. Fort refused to step down, contending that MARTA’s board always has provided elected officials whatever time they need to comment, because they represent constituents.

Beasley previously had urged the board to follow its own conscience in selecting a CEO/GM to succeed Beverly Scott, who is leaving at yearend. Beasley urged the board to ignore comments from state lawmakers, who have been quoted in The Atlanta Journal-Constitution opining about who should be named to the region’s top transit job.

“Anybody the General Assembly would strongly support, the community should be running like hell to get away from,” Beasley said. “You’re the decision maker. Use your power.”

Fort followed Beasley to the microphone. Fort, an Atlanta Democrat, noted that he is a 14-year member of MARTOC, the Legislature’s standing committee that oversees MARTA.

Fort said he had four points to make and was in the middle of his second point when the board chairman called “time” on Fort’s comments.

Fort objected to being cut off, saying that the board’s protocol in the past has been to provide a leeway to elected officials. Daniels said he intended no disrespect to Fort, but that the two-minute time limit applies to every speaker.

“Don’t tell me, ‘No disrespect,’” Fort said. “I’m advocating for you, for MARTA, but most importantly for the people who ride MARTA. You can remove me from this microphone if you want to…. I will speak truth to power.”

Moments later, Fort brushed the microphone aside – an indication that the microphone had been turned off. Fort’s voice was loud enough to broadcast even if it were not amplified.

After establishing his access to the podium, Fort stepped away without concluding his presentation. An officer standing 20 feet from the podium remained alert, but did not move forward.

Fort’s first point was to announce his continuing opposition to allowing the mayors of north Fulton County to appoint a voting member to the MARTA board. That proposal was floated previously and is expected to arise again. Among the issues Fort cited was the inequity that would provide to two mayors in a portion of his district in south Fulton who don’t get to appoint a MARTA member – East Point and Union City.

Fort’s second point addressed the persistent criticism among some state lawmakers that MARTA is wasteful.

“Stop apologizing,” Fort advised. “The numbers and facts don’t bear out that MARTA is being inefficient. I would like for GDOT to come under the same scrutinty as you do.”

Previous Article
A Total Transformation: Benjamin E. Mays High School
Next Article
Rev. Dan Matthews was on phone as his father described 9/11 tragedy outside his window