MARTA has delayed a deal with a branch of Atlanta’s development authority for a planned mixed-use development at a transit station near Little Five Points. 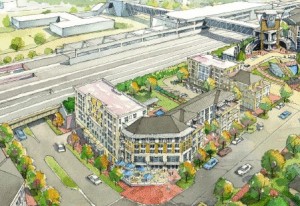 This is a rendering of the proposed development at MARTA’s Edgewood/Candler Park Station. Credit: Urban Residential Finance Authority

MARTA’s board voted Tuesday to hold off on the deal in order to allow its incoming GM/CEO, Keith Parker, time to provide his thoughts on the long-term agreement. Parker’s expected to begin work before the year’s end, following the exit of current CEO Beverly Scott.

MARTA’s board delayed for an indefinite period a proposed agreement with the Urban Residential Finance Authority, which is affiliated with Invest Atlanta, the city’s development arm that’s chaired by Mayor Kasim Reed.

There was no conversation by MARTA board members about the deferral. Board member Wendy Butler, who chairs the board’s Planning and External Relations Committee, simply said the committee decided to defer the proposed resolution. 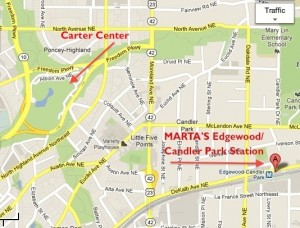 MARTA’s long term financial strategy calls for the formation of transit oriented developments (TODs) around its stations. The strategy envisions at least two outcomes: Generating money from ground leases that can help pay for transit services; and showing developers that the market will buy and lease space at developments around MARTA stations.

The signature example of a TOD is Lindbergh City Center. It’s a collection of office buildings, retail shops and restaurants, and residences on land MARTA has leased around its Lindbergh Station.

At the Edgewood/Candler Park Station, three partners are involved:

The transaction calls for URFA and MARTA to enter an agreement to lease the ground for the development site. URFA will turn around and consummate a deal with Columbia Residential to develop the site.

As proposed, the development it would provide 281 rental apartments, with 104 of them reserved for senior citizens with household incomes. There’d be retail shops and live/work spaces.

The project came together with help from the ARC and Southface, an Atlanta-based non-profit that promotes environmentally efficient communities, according to the fact sheet released by URFA.

The ARC and Southface conducted a charette in April 2011 in which non-profits and the development community met to discuss the potential of building out the MARTA property at the Edgewood/Candler Park Station.

In the end, URFA and its development partner, Columbia Residential, were chosen to do the project. Columbia Residential had the advantage of having recently collaborated with some of Edgewood’s neighborhood leaders in order to develop three projects associated with the Edgewood Retail District – which is the retail development by the Sembler Co. just south of Little Five Points.

The fact sheet produced by URFA outlines these six expected outcomes of the development:

The affordable housing is defined as 60 percent of area median income. For a single person, the income would be about $29,000, according to income limits for the Atlanta area released by the federal Department of Housing and Urban Development.

Click here to see a chart with income levels.