Civic leaders in south DeKalb County are trying – again – to improve the area, and this time their goals include the extension of MARTA bus and rail service along the I-20 corridor east to Mall at Stonecrest. 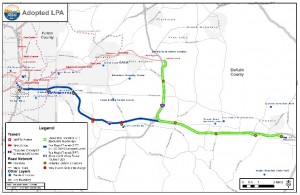 The proposed East Metro CID is dusting off this MARTA expansion route that’s been approved by MARTA directors. Credit: itsmarta.com

One caveat that may distinguish this organizational effort from its two predecessor’s is this plain call to extend MARTA service. The I-20/east route is among those MARTA GM Keith Parker says are contenders – once construction money is available.

Advocates say the CID would enable commercial property owners to raise money that could help provide the local match needed to draw down state and federal dollars. The CID funds also could target public safety, appearance, and roadway/sidewalk improvements.

Advocates are slated to meet Monday morning to rally support for the proposed East Metro Community Improvement District, according to the weekly newsletter of the DeKalb Chamber of Commerce.

The bus and heavy rail projects cited by the proposed CID were last floated during the regional debate over the 2012 transportation sales tax referendum.

Incidentally, according to some observers, one reason the sales tax referendum failed was because of voter protest of the decision to omit from the project list the long-promised heavy rail line in the I-20/east corridor.

MARTA’s board of directors has designated a locally preferred alternative to increase transit service in this region. The authorization enables the routes to be eligible for federal funding – should such funding ever become available. The two LPAs are: 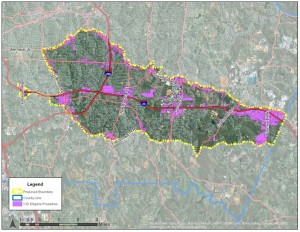 The proposed East Metro CID would stretch from Decatur to the Mall at Stonecrest. Credit: eastmetrocid.com

The website eastmetrocid.com lays out the basic framework of the proposed district:

This effort is the third in almost a decade to promote economic development in an area that has been bypassed by metro Atlanta’s growth. High home foreclosure rates during the great recession exacerbated the unfulfilled promise of the mall to attract new homes, businesses and entertainment destinations.

Back in 2011, community supporters tried to build momentum behind a proposed business association. The supporters thought they could implement the model used by the Tucker Business Association, which represents more than 130 businesses and has existed since 1955.

The idea of a business association emerged after a proposed CID failed to attract much support in 2008. Commercial property owners had little appetite for seeking a higher tax rate at a time property values were dropping through the floor.

The East Metro CID has retained the Collaborative Firm, headed by Michael Hightower, to form the organization, according to a story in crossroadnews.com.

Another proposed CID, the Airport West CID, has not gathered enough support from commercial property owners and its organizers hope to resubmit an application to Fulton County Tax Commissioner Arthur Ferdinand in the next six weeks.

Previous Article
J. Mack Robinson celebrated as a giving man with humility and integrity
Next Article
Teleworking offers workable options during snow days and every day