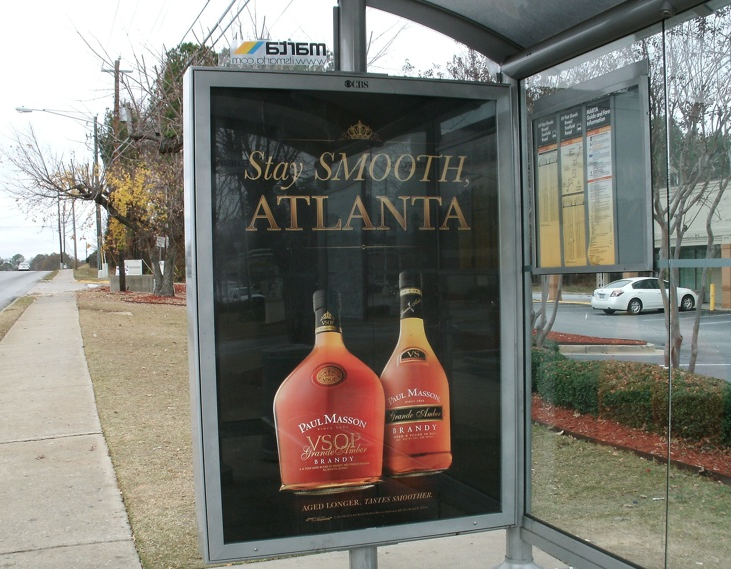 Ads for alcohol could become commonplace on MARTA buses, trains, stations and shelters as early as January. 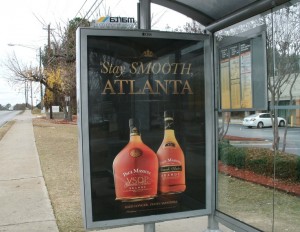 MARTA is in the process of hiring an advertising firm and has asked proponents to estimate the amount of money MARTA could make from alcohol ads. The bids are due June 10.

The decision to allow alcohol ads is one of MARTA’s latest efforts to raise money to operate the system. The decision also leads MARTA into territory that it traditionally has avoided, and entered just this year by allowing ad vendor CBS Outdoor to sell alcohol ads on MARTA property.

The decision already has resulted in MARTA being tagged as an agency that does not protect children from alcohol advertising. A report by Alcohol Justice, which describes itself as an industry watchdog, offered this observation:

The alcohol industry does not seem to be clamoring to advertise its products on transit systems.

Transit advertising accounted for less than 1 percent of the $3.45 billion the industry spent on advertising in 2011, according to a report released in March by the Federal Trade Commission. 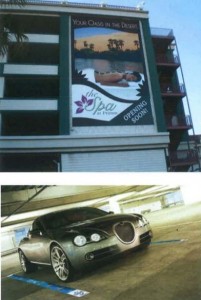 Alcohol ads could appear on parking structures and the painted lines between parking spaces. Credit: MARTA

Point-of-sale advertising in the leading category for alcohol, followed by national TV and sponsorship of sporting events, teams or athletes, according to the report. Together, these categories account for nearly two-thirds of the industry’s total advertising budget.

Transit ads barely squeaked ahead of newspaper advertising, which came in at 0.38 percent of the total industry budget compared to 0.84 percent for transit advertising. Transit advertising amounted to $28.9 million in 2011, according to the FTC report.

Nonetheless, MARTA has stepped gingerly into the alcohol advertising issue.

At a MARTA board meeting in January 2013, then board member Jannine Miller, the former executive director of GRTA, observed that alcohol advertising could discredit MARTA’s Nuisance Behavior Policy, as well as efforts by MARTA GM Keith Parker to repair the agency’s image, according to minutes of the meeting.

Parker concurred. The Charlotte transit system, where Parker once served as CEO, had banned advertising while it was trying to rebrand itself. Advertising was reauthorized a few years ago, and only very recently was alcohol advertising allowed – and then only after considerable debate, according to the minutes.

All that being said, the staff advised the board that, “alcohol advertising likely holds the greatest opportunity for MARTA to uncover additional revenue,” according to the minutes. 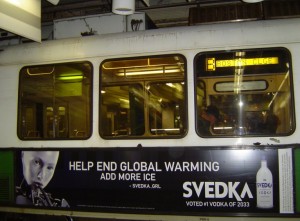 Boston’s transit system banned alcohol advertising in 2012, outlawing ads like this one that appeared in other cities. Credit: bostontoat.blogspot.com

The report by Alcohol Justice discounted the revenue claim. The report contended that transit systems collect less than 1 percent of revenues from alcohol advertising.

MARTA conducted a poll on the issue of alcohol advertising with riders and non-riders. After results showed a majority found it acceptable to sell alcohol ads in order to generate revenue, MARTA changed its advertising policy in December to allow alcohol ads.

Even now, MARTA isn’t fully committed to a wholesale allowance of ads for alcohol.

As MARTA’s request for proposals from ad companies states: 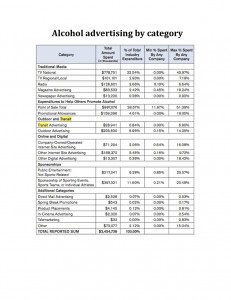 Click on the image to see a larger version. Credit: Federal Trade Commission

MARTA has included the following provisions in its notice to prospective ad firms:

o   “No more than 20% of the inventory is available at anyone time.

o   “Only general coverage is allowed (no geographical targeting).

o   “’Drink Responsibly’ message must be included in ad copy.”

In addition, the industry self-regulates placement by requiring that ads not be placed within 500 feet of a K-12 school or place of worship, according to the FTC report.

The issue of alcohol is as tricky as gambling when it comes to the sensitivity of the public. Especially in the nation’s Bible Belt, policy makers have tread carefully around these topics.

In 1992, then Gov. Zell Miller led a campaign to persuade Georgia voters to approve a lottery for education. No one has looked back as the lottery has provided more than $15 billion to Georgia students.

More recently, Georgia lawmakers voted to allow local communities to decide if packaged alcohol could be sold on Sundays. It’s now difficult to pass a liquor store in metro Atlanta that’s not open on Sundays.

Previous Article
‘Woke up this morning with my mind on freedom’: the civil rights crusade has been a long time coming
Next Article
Europe disunited: Why the EU elections matter to us