By Doug Sams and Maria Saporta
Published in the Atlanta Business Chronicle on June 6, 2014

For the first time, MARTA plans to find out how much desire developers have to build high-rise mixed-use projects over the transit authority’s urban train stations.

MARTA will solicit a “request for expressions of interest” later this summer to lease the air rights over intown train stations. Although MARTA would not specifically identify them, the stations are thought to include North Avenue, Midtown, Arts Center and Lenox. 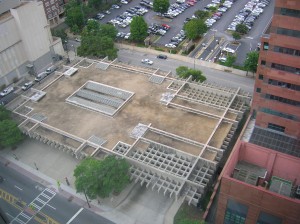 Offering air rights marks an important step in the maturation of MARTA’s transit network and underscores the ongoing progression toward greater density around its stations. In other U.S. cities such as Washington, D.C., developers need access to air rights because of the shortage of land around existing train stations. Historically, a lack of land hasn’t been much of an issue in the city of Atlanta, but that is starting to change, especially in Buckhead and Midtown, where a wave of high-rise residential projects are either in planning or underway.

Wood Partners is developing a high-rise apartment project next to the Midtown MARTA station. Just one block west on Spring Street, developers have started two student housing projects. Just south of the Arts Center Station, Olympia Heights Management LLC and Ashkenazy Acquisition Corp. are developing a $650 million high-rise mixed-use project between 15th and 14th streets; Novare Group is proposing a tower at 14th and West Peachtree; and The Related Group has yet another tower planned at that same intersection.

“There is so much activity around our stations right now we want to see how much interest there is in building on top of them,” Rhein said. “The apartment market is starting to feel pretty hot, so we are trying to get in front of that.”

Developing on top of MARTA stations isn’t new to Atlanta. In Buckhead, the 27-story Resurgens Plaza was built over the Lenox MARTA station. 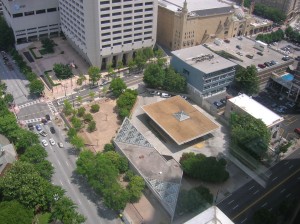 In downtown, the Sloppy Floyd building was built on top of the Georgia State MARTA station.

The difference is those buildings were developed concurrently with the stations years ago, said John Crocker, MARTA’s director of development and regional coordination. Any proposed air rights projects would have to be developed without interrupting ongoing transit operations.

MARTA’s roots date back to the early 1970s when it purchased the Atlanta Transit System. By the end of that decade, it was operating its first train and throughout the 1980s it expanded the rail system across the city.

The emphasis on transit-oriented development is much more recent and stems from the influence of CEO Keith Parker, who before joining the authority led the Charlotte Area Transit System when it expanded its light rail line.

Greater focus on the TOD program also coincided with the recovery of the economy and construction, particularly intown apartments.

“Keith truly wanted to do this once he got here, but then the market began to turn around,” Crocker said.

Parker has assembled a talented transit-oriented development team including Rhein, once a managing director with Invest Atlanta. Rhein also works closely with MARTA’s chief of staff, Rukiya Eaddy, whose background includes work for Atlanta BeltLine Inc., the nonprofit behind the redevelopment of a 22-mile loop of abandoned railroad tracks around the city.

MARTA plans to have five transit-oriented developments underway around its stations in the next two years.

It already has a developer for King Memorial ( Walton Communities LLC) and Avondale ( Columbia Ventures LLC). MARTA wants to name a developer later this summer for its Edgewood Candler Park station.

The next stations slated for transit-oriented project may include Brookhaven, where MARTA is already talking with city officials; Medical Center, a station on the Atlanta Perimeter where new development could include a hotel and more apartments; and Fort McPherson, an Army base that fell victim to the Pentagon base closings. Now, economic development officials believe it can become part of an Atlanta Aerotropolis.

MARTA will host what it calls Development Day June 11, when it plans to unveil its latest transit-oriented projects and introduce the idea of leasing air.

Previous Article
Metro Atlanta on cutting edge of electric vehicles, commute options
Next Article
Atlanta to showcase its volunteer spirit as a city where everyone can serve