MARTA has scheduled two meetings in early December to enable the public to learn about, and comment on, plans to advance the proposed light rail line that’s to stretch from the Lindbergh Station, through the Clifton Road corridor, to the Avondale Station. 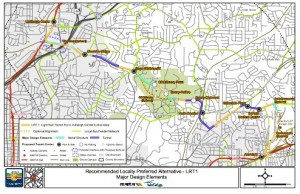 The proposed rail linne to serve the Clifton Road corridor would be built through densely developed neigbhorhoods. Credit: MARTA

The proposed light rail line that would serve the Emory University area has been discussed for nearly 20 years.

The general concept is to create a transit option for commuters from the Lindbergh Station to the Avondale Station. One of two options includes a tunnel and above-ground structure. The other does not include the tunnel.

The route was to have been funded with proceeds of the transportation sales tax that was on the ballot in 2012. Although voters rejected the proposed 1 percent sales tax, advocates of the “Clifton Road corridor” transit route have continued to foster the project.

The state Legislature is expected to revisit in the transportation funding issue during the 2015 session. Any measure is likely to take two years to win approval, which means a funding mechanism could be in place with the environmental impact study of the Clifton Road route is complete, in 2015 or 2016.

Some lawmakers are discussing an increase in the statewide motor fuel tax. Another proposal would enable a few counties to unite to propose a transportation referendum, rather than the 10 counties that were involved in the 2012 referendum.

Here are the proposed routes that are being reviewed, as stated in the Federal Registry: