MARTA has raised the stakes for passage of the proposed transportation sales tax in DeKalb County.

MARTA’s board of directors did what the Atlanta Regional Roundtable could not muster the votes to do – approve a construction proposal that would create a unified transit system in south DeKalb that would include enhanced bus service along I-20, but more importantly extend heavy rail service from Indian Creek Station to the Mall at Stonecrest.

Talk about a political imbroglio for voters in south DeKalb, some of whom thought their region didn’t get enough from the proposed sales tax for transportation projects in the 10-county metro area.

MARTA board treasurer Harold Buckley, Sr. submitted the motion with the new routes.

On the other hand, there is no guarantee – none at all – that the heavy rail to Mall at Stonecrest will ever be built. There simply is no money in sight for construction. There’s just the promise that MARTA will seek federal funding for the line – money that would come from a Congress so knotted up over spending that some lawmakers contend the federal government has no role in paying for highways or transit.

The resolution endorsing these routes was submitted by MARTA board treasurer Harold Buckley, Sr., who’s represented DeKalb on the board since 1985. It passed overwhelmingly.

(See a MARTA map at the end of this story.) 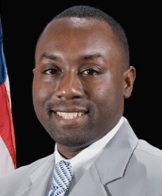 DeKalb County Commissioner Larry Johnson said he remains undecided about the merits of the sales tax for transportation, despite MARTA's actions.

DeKalb County Commissioner Larry Johnson summed up the consternation he thinks his south DeKalb constituents face as a result of MARTA’s new plan. May has been a vocal critic of the sales tax because, he says, it shortchanges a region that has been promised heavy rail service for a long time and has paid the 1 percent MARTA sales tax since MARTA’s inception.

“It’s a step in the right direction, but we still have to obtain funding, which is in the amount of $2 billion,” Johnson said in a measured comment fter the MARTA board voted April 9 for the plan.

One carrot the MARTA board included is a promise to work with partners to consider possibly turning the bus route into a light rail service at some point in the future.

“The MARTA board commits to working with our jurisdictional partners, such as DeKalb County, in a separate study effort, to develop supporting technical analysis to examine potential upgrades of the BRT component of this alternative to a higher capacity fixed guideway transit investment, including the necessary step to convert to a light rail technology that will be regionally adopted and integrated into the regional transit network.”

The Atlanta Regional Roundtable supported a similar plan to expand service along I-20, once the viability of the route is determined through a BRT system that’s to receive $225 million through the sales tax.

Click here to see a larger version of the map. 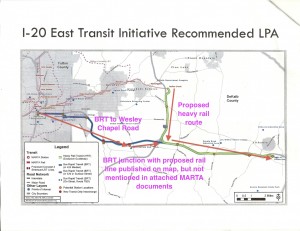