MARTA’s fare hike planned for 2015 – possibly to $2.75 per trip – and the possibility of zone pricing doesn’t offset the lack of state funding for the system, a bond rating house has determined. 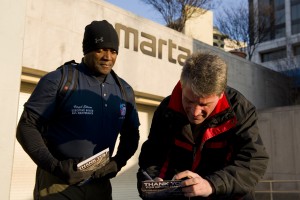 Fitch Ratings made its comments on MARTA’s fiscal situation in an advisory on MARTA’s planned sale this week of $26.3 million in sales tax revenue bonds.

Fitch’s conclusions on MARTA’s financial situation are generally in line with those determined by KPMG in its management study of MARTA. MARTA requested and paid for both the Fitch and KPMG reviews.

Fitch gave MARTA’s pending bonds a rating of AA—, with a stable outlook. For Fitch, the rating represents the middle of the investment grade. Fitch’s highest rating is AAA, and its lowest investment grade is BBB—.

The rating is based on a host of factors, including the negative effect of fare hikes on ridership and metro Atlanta’s slow recovery from the recession.

One bright spot highlighted for potential investors is that Georgia doesn’t allow governments to declare bankruptcy. Fitch noted that this means bond holders won’t see the future sales taxes that were supposed to repay them being diverted to other government uses.

Fitch made several references to the lack of state funding for the nation’s ninth-largest transit system. Among the references:

Fitch analysts indicated they would like to see MARTA implement more fare hikes.

The report noted that fare increases in 2009 and 2011 raised the fare box recovery ratio to 32 percent, which Fitch said is “more in line with other mass transit systems.”

Fitch supports the idea of an additional fare hike and zone pricing to raise revenues. Incidentally, zone pricing became a possibility more than a decade ago – when MARTA began using the Breeze card. In zone pricing, passengers would be charged for the distance traveled.

That said, Fitch noted that the previous fare hikes coincided with a decrease in ridership – 15 percent on buses and almost 13 percent on trains – between 2009 and 2012. The report also noted the concurrent timing of the economic downturn.

Regarding the current bond package, MARTA intends to use the proceeds to pay off bonds sold in 2003. Those bonds carry a higher interest rate than expected in the pending sale.

Previous Article
New Office Concept Is Enriching Relationships
Next Article
Metro Atlanta roads: How to make do with a transportation system that’s (mostly) already on the ground