The finances of the planned expansion of MARTA service in Clayton County gained clarity after Clayton’s Board of Commissioners voted Saturday to put a proposed 1 percent transit tax on the November ballot. 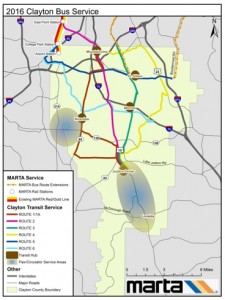 If MARTA could share existing tracks with Norfolk Southern, the cost of constructing a rail transit system would be $185 million less than if MARTA builds tracks in the same freight corridor owned by Norfolk Southern.

The cost difference is to be covered with an additional $70 million in federal funding, and an additional $115 million in debt, according to MARTA’s feasibility study, dated July 2. The annual debt payment would range from $12 million to $14 million.

Despite the financial challenges, the end result of expanding MARTA bus and train service into Clayton County will be worthwhile, according to advocates who support the proposed 1 percent tax rate.

“The community benefits from increased economic opportunities and access to transportation and jobs; the region wins; the business community wins, and ultimately the world wins,” Deborah Scott, executive director of Georgia Stand Up said Saturday.

One thing certain is that the planned bus service will immediately incur more than $17 million in capital expenses, according to MARTA’s report. The report shows costs of:

This is the description of the operations center contained in the feasibility study:

The feasibility study shows major funding sources during the first decade is to include the proposed transit tax, the federal government, and debt. Here’s how the figures break out:

The feasibility study does not contain any projections for federal assistance for maintenance and operations. That’s because the figures are based on ridership estimates, which the study says are not yet available:

Scott has long maintained that the details can be worked out so that Clayton residents can have access to MARTA service:

“Clayton County is home of the world busiest airport, and after over 40 years plus, residents of Clayton County will finally get to ride the bus and one day the train to work there,” Scott said Saturday. “This is progress. However slow, we are moving in the right direction.”